Cash, Weapons and Surveillance: the U.S. is a Key Party to Every Israeli Attack 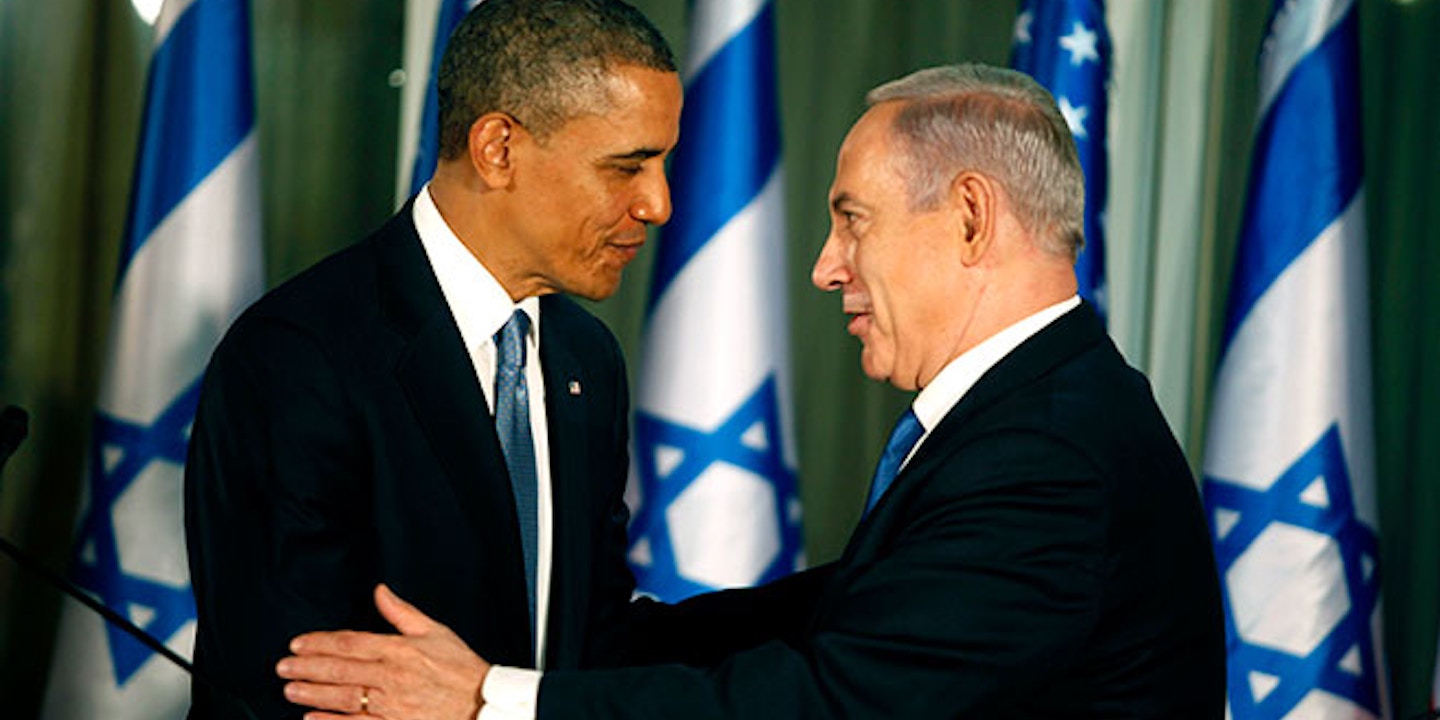 The U.S. government has long lavished overwhelming aid on Israel, providing cash, weapons and surveillance technology that play a crucial role in Israel’s attacks on its neighbors. But top secret documents provided by NSA whistleblower Edward Snowden shed substantial new light on how the U.S. and its partners directly enable Israel’s military assaults – such as the one on Gaza.

Over the last decade, the NSA has significantly increased the surveillance assistance it provides to its Israeli counterpart, the Israeli SIGINT National Unit (ISNU; also known as Unit 8200), including data used to monitor and target Palestinians. In many cases, the NSA and ISNU work cooperatively with the British and Canadian spy agencies, the GCHQ and CSEC.

The relationship has, on at least one occasion, entailed the covert payment of a large amount of cash to Israeli operatives. Beyond their own surveillance programs, the American and British surveillance agencies rely on U.S.-supported Arab regimes, including the Jordanian monarchy and even the Palestinian Authority Security Forces, to provide vital spying services regarding Palestinian targets.

The new documents underscore the indispensable, direct involvement of the U.S. government and its key allies in Israeli aggression against its neighbors. That covert support is squarely at odds with the posture of helpless detachment typically adopted by Obama officials and their supporters.

President Obama, in his press conference on Friday, said “it is heartbreaking to see what’s happening there,” referring to the weeks of civilian deaths in Gaza – “as if he’s just a bystander, watching it all unfold,” observed Brooklyn College Professor Corey Robin. Robin added: “Obama talks about Gaza as if it were a natural disaster, an uncontrollable biological event.”

Each time Israel attacks Gaza and massacres its trapped civilian population – at the end of 2008, in the fall of 2012, and now again this past month – the same process repeats itself in both U.S. media and government circles: the U.S. government feeds Israel the weapons it uses and steadfastly defends its aggression both publicly and at the U.N.; the U.S. Congress unanimously enacts one resolution after the next to support and enable Israel; and then American media figures pretend that the Israeli attack has nothing to do with their country, that it’s just some sort of unfortunately intractable, distant conflict between two equally intransigent foreign parties in response to which all decent Americans helplessly throw up their hands as though they bear no responsibility.

“The United States has been trying to broker peace in the Middle East for the past 20 years,” wrote the liberal commentator Kevin Drum in Mother Jones, last Tuesday. The following day, CNN reported that the Obama administration “agreed to Israel’s request to resupply it with several types of ammunition … Among the items being bought are 120mm mortar rounds and 40mm ammunition for grenade launchers.”

The new Snowden documents illustrate a crucial fact: Israeli aggression would be impossible without the constant, lavish support and protection of the U.S. government, which is anything but a neutral, peace-brokering party in these attacks. And the relationship between the NSA and its partners on the one hand, and the Israeli spying agency on the other, is at the center of that enabling. Last September, the Guardian revealed that the NSA “routinely shares raw intelligence data with Israel without first sifting it to remove information about US citizens.” The paper published the full top secret Memoranadum of Understanding between the two agencies governing that sharing. But the NSA/ISNU relationship extends far beyond that.

Specifically, “this SIGINT relationship has increasingly been the catalyst for a broader intelligence relationship between the United States and Israel.” Moreover, “NSA’s cyber partnerships expanded beyond ISNU to include Israeli Defense Intelligence’s [Special Operation Division] SOD and Mossad.”

Under this expanded cooperation, the Americans and Israelis work together to gain access to “geographic targets [that] include the countries of North Africa, the Middle East, the Persian Gulf, South Asia, and the Islamic republics of the former Soviet Union.” It also includes “a dedicated communications line between NSA and ISNU [that] supports the exchange of raw material, as well as daily analytic and technical correspondence.”

The relationship has provided Israel with ample support for both intelligence and surveillance: “The Israeli side enjoys the benefits of expanded geographic access to world-class NSA cryptanalytic and SIGINT engineering expertise, and also gains controlled access to advanced U.S. technology and equipment via accommodation buys and foreign military sales.” Among Israel’s priorities for the cooperation are what the NSA calls “Palestinian terrorism.”

The cooperation between the NSA and ISNU began decades ago. A top secret agreement between the two agencies from July 1999 recounts that the first formal intelligence-sharing agreement was entered into in 1968 between U.S. President Lyndon Johnson and Israeli Prime Minister Levi Eshkol, and informally began in the 1950s. But the relationship has grown rapidly in the last decade.

In 2003 and 2004, the Israelis were pressuring the NSA to agree to a massively expanded intelligence-sharing relationship called “Gladiator.” As part of that process, Israel wanted the Americans to pay hundreds of millions of dollars to fund Israeli activities. The specific proposed “Gladiator” agreement appears never to have been consummated, derailed by Israeli demands that the U.S. bear the full cost, but documents in the Snowden archive pertaining to those negotiations contain what appear to be two receipts for one or more payments of $500,000 in cash to Israeli officials for unspecified purposes: 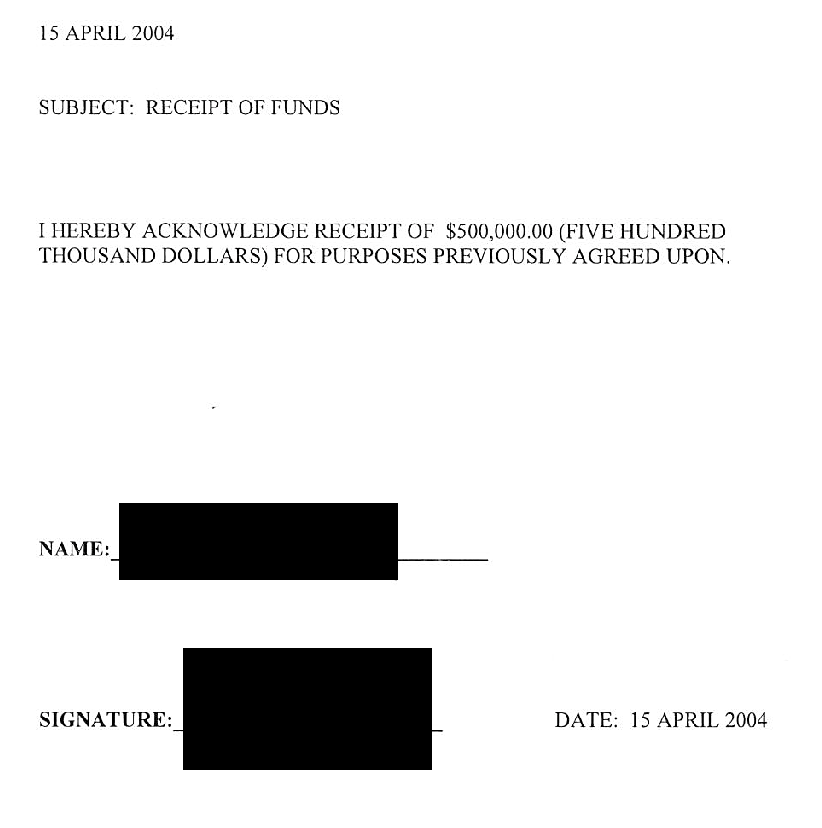 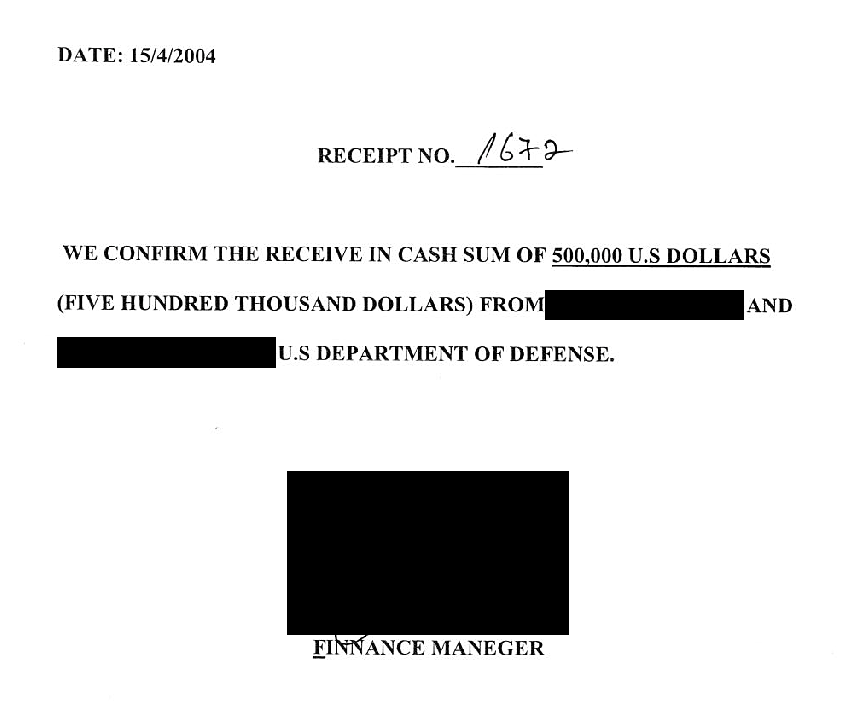 The surveillance-sharing relationship with Israel has expanded to include the NSA’s British and Canadian counterparts, GCHQ and CSEC, both of which actively participate in feeding the Israelis selected communications data they have collected. Several documents from early 2009, at the height of the Israeli attack on Gaza called “Cast Lead” that left more than 1,000 people dead, detail some of this cooperation.

One top secret 2009 GCHQ project named “YESTERNIGHT” involved “Ruffle,” the British agency’s code name for ISNU. According to the document, the project involved a “trilateral (GCHQ, NSA and Third Party RUFFLE) targeting exchange agreement covering respective COMSAT accesses.” One of the “specific intelligence topics” shared between the parties was “Palestinians”, although the GCHQ document states that “due to the sensitivities” of Israeli involvement, that particular program does not include direct targeting of Palestinians and Israelis themselves. Another GCHQ document from February, 2009, describes “a quadrilateral meeting for RUFFLE, NSA, CSEC and GCHQ.”

The British agency noted in early 2009 that it had been spying on emails and telephone numbers specifically requested by ISNU, “and they have thanked us many times over.”

The NSA and GCHQ receive intelligence about the Palestinians from many sources. The agencies have even succeeded in inducing the U.S.-supported Palestinian Authority Security Forces (PASF) to provide them with surveillance and intelligence about other Arab groups in the region. One July 2008 GCHQ document states:

Jordan also feeds surveillance data about the Palestinians to the NSA. One classified NSA document from 2013 describes how “NSA’s partnership with EWD [the Jordanian Electronic Warfare Directorate] is a well established, long-standing and trusted relationship dating back to the early 1980’s.” Specifically, the two agencies “cooperate on high-priority SIGINT targets of mutual interest” that includes the Palestinian Security Forces.

The document continues: “EWD provides high-interest, unique collection on targets of mutual interest, such as the Palestinian Security Forces; EWD is the sole contributor to a large body of NSA’s reporting on this target.” But even as the NSA and its partners are directed by political branches to feed the Israelis surveillance data and technology, they constantly characterize Israel as a threat – both to their own national security and more generally to regional peace. In stark contrast to the public statements about Israel made by American and British officials, the Snowden archive is replete with discussions of the Israelis as a menace rather than an ally.

NSA documents previously published by the Guardian stated that “one of NSA’s biggest threats is actually from friendly intelligence services, like Israel.” Another notes that the National Intelligence Estimate ranked Israel as “the third most aggressive intelligence service against the U.S.”

British officials have a similar view of the Israelis, describing them as a “very real threat to regional stability.” One top secret GCHQ planning document from 2008 notes that “policy makers remain deeply concerned over the potential threat that Israel poses to a peaceful resolution of the Iran problem, and to some of Israel’s less desirable activities in the region.” Moreover, “Israel’s thinking on the long-term threat offered by Iran to its fundamental foreign policy strategy of armed deterrence may create very real threats to regional stability in 2009.”

The NSA’s 2007 Strategic Mission List, identifying priorities for surveillance targeting, repeatedly identifies Israel as one of the leading threats in a diverse range of areas, including: “Combating the threat of development of weapons of mass destruction” and “delivery methods (particularly ballistic and nuclear-capable cruise missiles).” The “focus area” for that concern is “WMD and missile proliferation activities,” and one of the leading threats is listed as “Israel (cruise missiles).”

The NSA internal discussion from that document regarding “Mastering Cyberspace and Preventing an Attack on U.S. Critical Information Systems” includes a subheading on “FIS [financial/banking system] threats.” The nations identified as the leading FIS threats include India, North Korea, Cuba and Israel. Similarly, Israel appears on the list of countries believed by the NSA to be “Enabling EW (producers/proliferators).”

Asked about its cooperative relationship with Israel, an NSA spokesperson told the Intercept: “We are not going to comment on specific intelligence activities and relationships.  The fact that intelligence services sometimes cooperate in a lawful and appropriate manner mutually strengthens the security of both nations.  Whenever NSA shares intelligence information or technology, we comply with all applicable laws and rules.” A GCHQ official refused to comment on the record beyond the agency’s standard boilerplate claiming its activities are legal and subject to “rigorous oversight.”

Legal or not, the NSA’s extensive, multi-level cooperation with Israeli military and intelligence agencies is part of a broader American policy that actively supports and enables Israeli aggression and militarism. Every Israeli action in Gaza has U.S. fingerprints all over it. Many Americans may wish that the Israeli attack on Gaza were a matter of no special relevance or concern to them, but it is their own government that centrally enables this violence.