One Apology in Ferguson 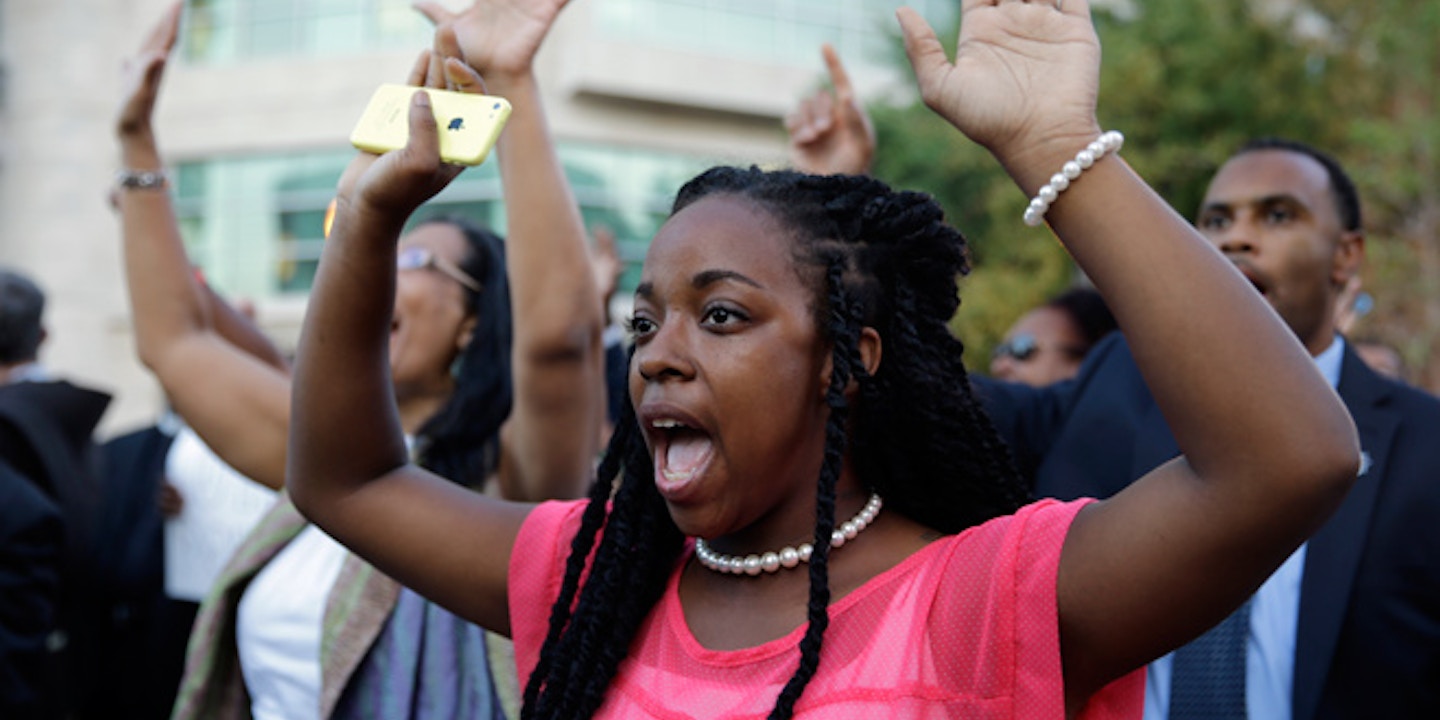 FERGUSON, Mo.—A grand jury heard evidence for the first time Wednesday in the case of the shooting death of unarmed African American teenager Michael Brown at the hands of white Ferguson, Missouri police officer Darren Wilson. Protesters and clergy members, meanwhile, descended on the Buzz Westfall Justice Center to call for St. Louis County Prosecuting Attorney Robert McCulloch to be removed from the case. McCulloch has deep family ties to law enforcement; his mother, brother, uncle and cousin have all worked for the St. Louis Police department.

Standing outside the justice center, the demonstrators chanted, “Hands up, don’t shoot.” As lightning flashing overhead, dozens of police and correction officers, nearly all of them white, could be seen inside the building watching the demonstration through the glass windows. On the concrete where the demonstrators stood, “BLACK LIVES MATTER” was written in green, pink and blue chalk, surrounded by stencils of splayed out bodies.

Even as Missouri Gov. Jay Nixon announced today that he was recalling the National Guard, Ferguson remained on a razor’s edge. A funeral for the dead teen has been scheduled for Monday, and is expected to draw a massive turnout. While the eleventh day of demonstrations ended without tear gas or violence, criticisms of the police response to protest, and to the slow progress on the investigation into Brown’s killing, continue to mount.

Attorney General Eric Holder visited Ferguson Wednesday, telling reporters that “few things have affected me as much” as his visit to the St. Louis suburb. “I am the attorney general of the United States, but I am also a black man,” he told a gathering at a local community college, adding that he understands the “mistrust” certain communities often feel towards law enforcement. Holder also held a meeting with FBI agents currently investigating the shooting.

When Holder met with Missouri Highway Patrol Capt. Ron Johnson, who has taken the lead in managing law enforcement here, he greeted him with a hug. “You are the man,” Holder told Johnson.

Johnson has garnered praise from many for his brand of public engagement during the unrest. But he has also fielded critical questions over law enforcement’s treatment of media covering the demonstrations. More than a dozen journalists have been arrested covering events in Ferguson, including this reporter. Johnson apologized for that arrest today.

“I’ll tell you that we had heard that some journalists had been arrested,” Johnson told me in an interview, explaining that some violent protestors had been posing as journalists in order to avoid arrest. “We’ve stopped many individuals with phones who say they were journalists, that we say, ‘Okay, where are your credentials?’ ‘Oh, I don’t have any.’ ‘Well, who do you work for?’ And they name some company that doesn’t exist.”

“It’s a tough situation, so I apologize,” Johnson added.

Wednesday night was  among the calmest since the demonstrations began–only six arrests were made, compared to dozens in preceding nights. But it wasn’t without incident—one officer was suspended Wednesday for pointing his gun at numerous demonstrators and members of the media the previous night. During the incident, which was captured on video, the visibily agitated officer pointed his gun at a man and said, “I will fucking kill you.”

On Wednesday afternoon, members of the media descended on a Ferguson church amid reports that the site, which activists had been using to distribute supplies to treat tear gas exposure, was raided by police. Activists told The Intercept that police entered the church with a building inspector, but it was not immediately clear whether the authorities confiscated any of the supplies. Individuals involved with operations at the church said police have been parking outside since it was advertised online as a “safe space” days ago. Multiple activists described the police presence as an act of “intimidation.” The St. Louis County Police Department released a statement yesterday evening saying, “Officers on the scene advised there was no animosity between the police or the representative of the church.”

As yesterday’s demonstrations began to wind down after midnight, a short, slim 18-year-old African American man named Leon Nelson appeared on the main street of W. Florissant Ave., the epicenter of the protests, with a large open wound on his right cheekbone. Nelson was quickly surrounded by reporters and cameras. Nelson, who graduated high school this year, told the press that on Tuesday night, amid one of the more intense moments of the evening, he was thrown to the ground by police, on top of broken glass, punched in the face, and kneed twice in the head before being arrested. “I was in the parking lot and I guess a kid threw a plastic bottle towards a police officer. Next thing you know they just start chasing everybody,” Nelson told The Intercept. “I started running, I turn around, I see six officers behind me with a taser aiming at my back.”

“They grabbed me, threw me on the ground where the glass was at and I told them, ‘I surrender, I didn’t do nothing,’ and they punched me in my head while I was in handcuffs and they threw me in the paddywagon,” he added. Nelson said he was held until 4 a.m. and charged with refusal to disperse. Nelson–whose account was supported by his cousin Isaiah Danfort, also present last night and the night before–said the incident would not prevent him from protesting.

“I’m going to keep doing what I’m doing,” said Nelson, who added that he had met Michael Brown a handful of times. “It’s not going to stop me.”

“I just hope everybody see the real real, see what we going through in St. Louis,” Nelson said, telling the press that racist policing is a fact of life for young people like him. “All of us have went through it all, so that’s why I’m right here, right now, standing with the protesters for Mike Brown, because that could have been me dead right now, over something that stupid.”

“I’m showing respect and I’m getting justice,” he said.

Nelson didn’t have the opportunity to ask Capt. Johnson for an apology, and none was offered.