Have You Watched This Airstrike in Iraq?

“Have you seen the latest airstrike videos from operations against #ISIL in #Iraq?” the U.S. Central Command tweeted this morning. 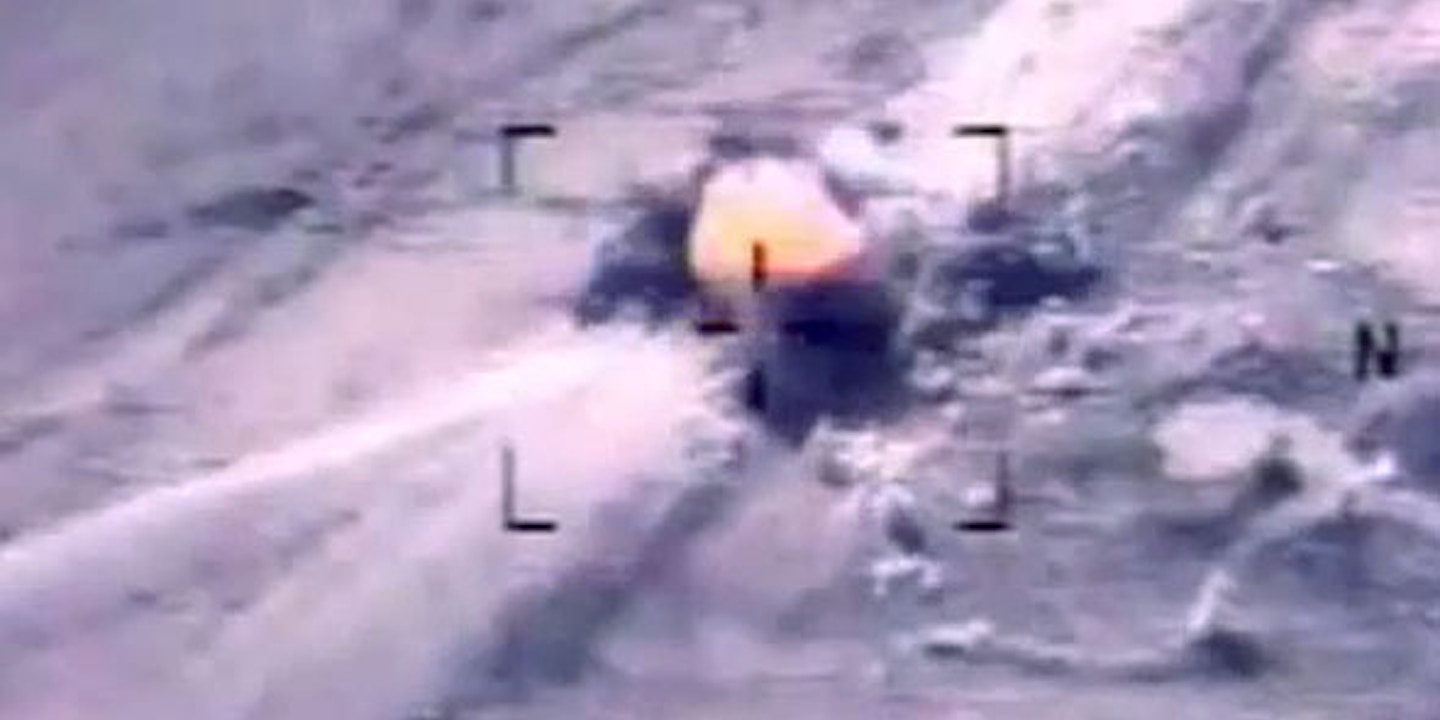 “Have you seen the latest airstrike videos from operations against #ISIL in #Iraq?” the U.S. Central Command tweeted this morning.

The U.S. has bombed Iraq 131 times this year. There was not a single airstrike in 2012 and 2013, reflecting the official end of the war. Now the U.S. is back at it with a new enemy in its sights—the Islamic State.

CENTCOM has provided precise numbers for the strikes against Islamic State fighters. We know roughly where they happened, and what vehicles were hit (though not how many people died.) We can watch some of them, because CENTCOM has been helpfully posting declassified footage to YouTube for the past three weeks.

Up until this latest social media spree, CENTCOM’s YouTube channel was the kind of military propaganda we’re used to—recruitment-style videos and smiley troop fare like “Faces of Freedom,” featuring a sergeant and his bomb-sniffing dog. It hasn’t been quite up to the level of the Israeli Defense Forces’ social media PR blitz, but these new videos, and the detailed descriptions of strikes (being compiled here by journalist Chris Woods), seem to mark a new effort.

The quick release of stats and imagery may reflect the need to drum up public support for the campaign against the Islamic State. CENTCOM’s public affairs office declined an interview on their newfound media enthusiasm, saying only that there was a lot of media interest in Iraq and they know we—the press, that is—want images.

Instant information, and an official acknowledgment of U.S. involvement, is certainly better than where we are with drone strikes, which the government still generally refuses to say much about, much less release video of. Over the past year or so there’s been an increasing demand for transparency in the secretive drone war in Pakistan, Yemen, and Somalia from former administration officials, rights groups, congress, and journalists. But these shots of grainy slow-motion explosions in Iraq are more propaganda than transparency, and the kill videos are tough to take when one considers that they are being deployed against a group that’s gotten the world’s attention through horrific videotaped executions.

The drone war was happening with so little debate that it seemed the least that reporters and activists could do was to raise its profile through images, wherever we could make or get them. In absence of real imagery, we visualized data, illustrated statements and news reports, and made maps. My colleague, Josh Begley, made a drone strike app. Most did this in the name of transparency, to involve the public in decisions about the use of force and to push for accountability when it became clear that the wrong people were being killed. The CENTCOM YouTube channel on Iraq is transparency of a sort, but it serves different aims.

The appeal of airstrikes, and drones in particular, has been the touted ability to conduct long-term surveillance and kill with precision. For the moment, the Iraq strikes seem clean. The videos show a truck. Boom. No boots on the ground. No messy invasion.

In Afghanistan, there’s been far less attention to the air war, though airstrikes regularly kill civilians (and in recent incidents, U.S. and Afghan troops), and that’s probably fine with the government. The administration also doesn’t need to rally anyone to military action there, with the war winding down. (The military does release numbers about strikes, but there’s no media campaign as for Iraq.)

Drone warfare in Yemen and in Pakistan and in Afghanistan has shown it’s not  always easy to say who belongs to a terror group, and who is a legitimate target, on the ground or in the air. If the U.S. continues the bombardment, it’s almost certain that the same questions will eventually arise. And if there are civilians killed, it’s unlikely CENTCOM will tweet about the videos.