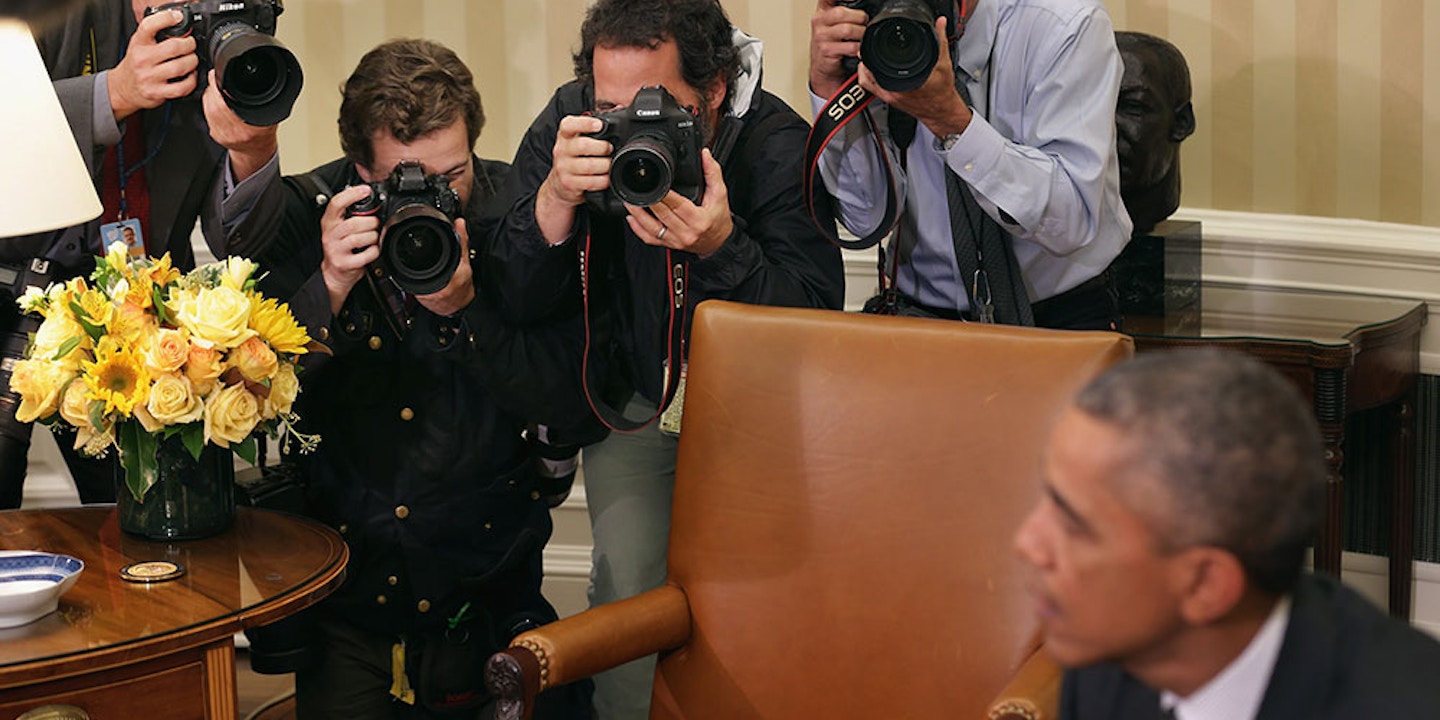 But Page seemingly didn’t make a detailed argument; she just uttered a few adjectives (“restrictive” as well as “dangerous”). Wemple generously explained what he assumed she was talking about (“the Obama administration’s leak investigations and its naming of Fox News’s James Rosen as a possible ‘co-conspirator’ in a violation of the Espionage Act.”)

And sadly, the rest of the story was devoted to what this weekend’s meeting of the White House Correspondents’ Association was evidently really about: Whining about photo ops and fine wines.

There is certainly a problem with White House reporting. Anybody trying to figure out what’s actually going on in there faces not only opacity but often obstruction. It’s so far from Obama’s promise of the “most transparent administration ever” that you have to laugh or cry.

But what the White House Correspondents’ Association appears to be fighting over is scraps. They’re furious that they’re not getting spoonfed enough. Wemple:

Bloomberg White House correspondent Margaret Talev noted how the White House stopped giving details on the fine wines served at state dinners, an opaque measure that she exposed in this story. In pursuing the piece, said Talev, she got the runaround from White House press officials, making her “so mad at them.”

Another grievance was particularly fresh in the group’s memories:

The day before, President Obama had opened the White House doors to Nina Pham, the Texas nurse who had just completed her recovery from Ebola at the National Institutes of Health. Prior to the session, the White House announced that still photographers would be allowed to document the proceedings. But print reporters and TV cameras would be out in the cold.

The group also had some slightly more legitimate beefs: “large-scale ‘deep background’ briefings — attended by up to 40-odd reporters — at which ground rules specify no names for the officials in attendance and no quotations of anything they say.” (But who are these 40 reporters who choose to attend? Shame on them.)

Look, being a White House reporter is a notoriously terrible job, horribly dependent on sucking up to press aides, boring most of the time, filled with the terror of being scooped.

Nobody has called out the White House correspondents better than legendarily bad press secretary Scott McClellan, who after he left miraculously turned around and wrote a devastating critique of both the Bush White House and the credulous, sycophantic press corps that waved its pom-poms as the country launched a terrible war under false pretenses.

The latest example of soulless White House pack journalism came in its coverage of White House policy toward the Islamic State, which quickly veered from baying for blood, to obsessing with optics, and then piling on.

So this bunch’s self-centered mewling about not getting invited to photo ops just doesn’t do much for me.

If they really cared about the lack of transparency in Obama’s White House, there’s one constructive thing they could do: Write about it.

Instead of checking-their-brains-at-the-door stenography, they could actually characterize the contents of what they hear from White House officials, calling attention the endless repetitition of non-responsive talking points.  They could write about how they’re not  allowed to talk to the people who actually make decisions, just their press aides. They could share with readers all the questions that they can’t get a straight answer to; and all the important issues of public interest that remain shrouded in mystery.

There are some things they could do collectively, other than whine. They could boycott background briefings. They could follow up each others’ questions aggressively. They could  stop granting sources anonymity except in the rare case that a credible, knowledgeable source actually tells them something so worthwhile (and true) that the loss of accountability is nevertheless a good deal for the readers.

When you’re being given nothing but pablum, you shouldn’t be whining about the size of the spoon. You have better things to do.