What Happened to the Humanitarians Who Wanted to Save Libyans With Bombs and Drones? 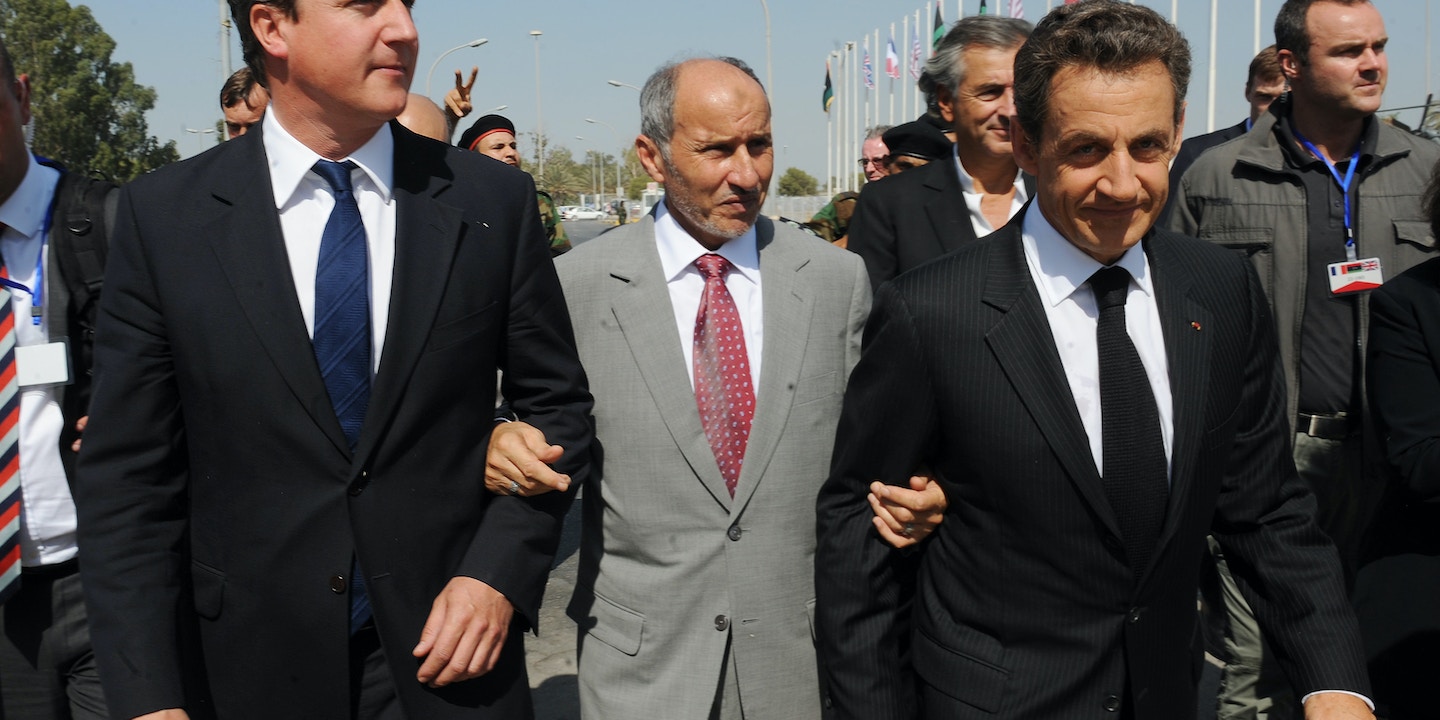 Just three years after NATO’s military intervention in Libya ended and was widely heralded by its proponents as a resounding success, that country is in complete collapse. So widespread is violence and anarchy there that “hardly any Libyan can live a normal life,” Brown University’s Stephen Kinzer wrote in The Boston Globe last week. Last month, the Libyan Parliament, with no functioning army to protect it from well-armed militias, was forced to flee Tripoli and take refuge in a Greek car ferry. The New York Times reported in September that “the government of Libya said . . . that it had lost control of its ministries to a coalition of militias that had taken over the capital, Tripoli, in another milestone in the disintegration of the state.”

Sectarian strife and economic woes destroyed efforts by the U.S. and U.K. to train Libyan soldiers, causing those two nations last week to all but abandon further programs: “not a single soldier had been trained by the U.S. because the Libyan government failed to provide promised cash.” AP reports this morning that an entire city, Darna, has now pledged its allegiance to ISIS, “becoming the first city outside of Iraq and Syria to join the ‘caliphate’ announced by the extremist group.” A report issued by Amnesty International two weeks ago documented that “lawless militias and armed groups on all sides of the conflict in western Libya are carrying out rampant human rights abuses, including war crimes.” In sum, it is almost impossible to overstate the horrors daily faced by Libyans and the misery that has engulfed the country.

All of that prompts an obvious question: where did all of the humanitarians go who insisted they were driven by a deep and noble concern for the welfare of the Libyan people when they agitated for NATO intervention? Almost without exception, war advocates justified NATO’s military action in Libya on the ground that it was driven not primarily by strategic or resource objectives but by altruism. The New York Times‘ Nicholas Kristof wrote: “Libya is a reminder that sometimes it is possible to use military tools to advance humanitarian causes.” Former Obama official Anne-Marie Slaughter argued that intervention was a matter of upholding “universal values,” which itself advanced America’s strategic goals. In justifying the war to Americans (more than a week after it started), President Obama decreed: “Some nations may be able to turn a blind eye to atrocities in other countries. The United States of America is different.”

But “turning a blind eye” to the ongoing – and now far worse – atrocities in Libya is exactly what the U.S., its war allies, and most of the humanitarian war advocates are now doing. Indeed, after the bombing stopped, war proponents maintained interest in the Libyan people just long enough to boast of their great prescience and to insist on their vindication. Slaughter took her grand victory lap in a Financial Times op-ed headlined “Why Libya sceptics were proved badly wrong,” Dismissing those who were telling her that “it is too early to tell” and that “in a year, or a decade, Libya could disintegrate into tribal conflict or Islamist insurgency, or split apart or lurch from one strongman to another,” she insisted that nothing could possibly be worse than letting Gaddafi remain in power. Thus: “Libya proves the west can make those choices wisely after all.”

Kristof similarly took his moment in the sun to celebrate his own rightness, visiting Tripoli in August and then announcing that Americans were regarded by grateful Libyans as heroes. While carefully larding up his column with all sorts of caveats about how things could still go terribly wrong, he nonetheless trumpeted that “this was a rare military intervention for humanitarian reasons, and it has succeeded” and that “on rare occasions military force can advance human rights. Libya has so far been a model of such an intervention.” When Gaddafi’s defeat was imminent, the White-House-supporting Think Progress blog exploited the resulting emotions (exactly as the GOP did when Saddam was captured) to taunt the Republicans: “Does John Boehner still believe U.S. military operations in Libya are illegal?” – as though killing Gaddafi somehow excused the waging of this war in the face of Congressional rejection of its authorization, let alone guaranteed a better outcome for Libyans.

The same scene of smug self-congratulations repeated itself in other countries participating in the war. “Even as Canada staged a lavish November 2011 victory parade and flypast over Parliament Hill in Ottawa, Libya was fast descending into absolute anarchy,” reported The Chronicle Herald. In September, Christian Science Monitor described how “Western leaders are swooping into Tripoli to celebrate the rebels’ victory and offer support for the new Libya, whose success they see [as a] model for other Arab revolutions.” French President Nicolas Sarkozy and British Prime Minister David Cameron (pictured above) basked in the thanks from NATO’s favorite Libyan transition leaders for having fought a war on a “purely humanitarian basis.” A der Spiegel headline pronounced: “Sarkozy and Cameron in Libya: Heroes for a Day.” Finally, the west had found its Good War about which it could feel pure and proud.

What’s most notable here isn’t how everything in Libya has gone so terribly and tragically wrong. That was painfully predictable: anyone paying even casual attention now knows that killing the Bad Dictator of the Moment (usually one the U.S. spent years supporting) achieves nothing good for the people of that country unless it’s backed by years of sustained support for rebuilding its civil institutions. And even then, better results are very difficult to achieve. That was, of course, one of the prime arguments made by those who opposed the intervention in Libya: that it would achieve nothing good for the Libyan people while creating untold chaos and killing many of its citizens.

What’s most notable is how brazen these war advocates were about completely ignoring Libya once the exciting bombs fell and their glorious war victory dances were over. With a couple of notable exceptions, such as Juan Cole who visited the country, the most prominent war advocates in both government and the commentariat seemed to completely forget that the country and its people – whose welfare so profoundly moved them on a deep humanitarian level – even existed. As the country spun into chaos, violence, militia rule and anarchy as a direct result of the NATO intervention, they exhibited no interest whatsoever in doing anything to arrest or reverse that collapse. What happened to their deeply felt humanitarianism? Where did it go?

There are all sorts of reasons to oppose so-called “humanitarian interventions.” To begin with, virtually all wars, even the most blatantly aggressive ones of conquest (such as the Iraq War) are wrapped in humanitarian packaging. Moreover, there should be enormous doubt about the ability of the west to use bombs and military force – in distant lands with radically different and complex cultures – to manipulate political and social outcomes to its liking (except where total disorder is what it craves, in which case it likely can achieve its goals). Beyond that, the devastation and human costs from having the powerful U.S. military bomb countries are enormous, and will virtually never be outweighed by supposed “benefits.”

But the most compelling reason to oppose such wars is that – even if it all could work perfectly in an ideal world and as tempting as it is to believe – humanitarianism is not what motivates the U.S. or most other governments to deploy its military in other nations. If you have doubts about that, just look at how the supposed humanitarian concern for Libyans instantly vanished the moment all the fun, glory-producing and self-satisfying bomb-dropping was done. If there were any authenticity to the claimed humanitarianism, wouldn’t there be movements to spend large amounts of money not just to bomb Libya but also to stabilize and rebuild it? Wouldn’t there be just as much horror over the plight of Libyans now: when the needed solution is large-scale economic aid and assistance programs rather than drone deployments, blowing up buildings, and playful, sociopathic chuckling over how we came, conquered, and made The Villain die?

I’d be much more inclined to believe in the professed humanitarianism of these war advocates if it lasted longer than the fun imperial ritual of starting distant and risk-free wars in other countries and then reveling in the Glory of Victory. The way most war advocates instantly forgot Libya existed once that fun part was over is the strongest argument imaginable about what really motivates these actions. In the victory parade he threw for himself, Kristof said the question of “humanitarian intervention” will “arise again” and “the next time it does, let’s remember a lesson of Libya.” About that, at least, he’s absolutely right.