Long before Jim Messina became a trusted aide to President Barack Obama and one of the most powerful men in Washington, he was just a simple boy from Boise. Now, after working in politics for just over a decade, he lives in a lavish D.C. estate. How this happened is a classic Washington Cinderella story.

Raised in Idaho by a single mother, Messina moved to Washington in 1995, in his mid-20s, to take a job as a legislative aide for Max Baucus, the conservative Democratic senator from Montana (now ambassador to China). Baucus supported George W. Bush-era personal and corporate tax cuts, and other policies favored by the Wall Street firms, pharmaceutical companies, and lobbyists, from whom he raised so much money.

Up until 2002, Messina was still largely unknown. But that year, when managing Baucus’s Senate re-election campaign, he released one of the more homophobic ads of modern political times. It featured footage from a 20-year-old TV ad for a hair salon run by Baucus’s opponent, Mike Taylor –who at the time was 20 points behind in the polls and had no chance of winning –who was seen massaging a man’s face while wearing an open-front shirt, and hence was obviously supposed to be gay.

This sort of scumminess put Messina on the map in Democratic circles. He also became known as a world class asshole who kept an “enemies” list on an Excel spreadsheet. “Everybody was a douchebag,” says a person who knew him then. “He kept score.”

In 2008, Messina joined Obama’s presidential campaign and after the inauguration was named as a deputy chief of staff under the awful Rahm Emanuel. One of his first jobs was to salvage Timothy Geithner’s confirmation as Treasury Secretary, which was endangered due to tax irregularities. The fact that Baucus, chairman of the Senate Finance Committee, was in charge of Geithner’s confirmation made Messina’s job a lot easier. (The basic story is told in this Washington Post blow job, or “beat sweetener,” as it’s known in D.C. journalism circles.) 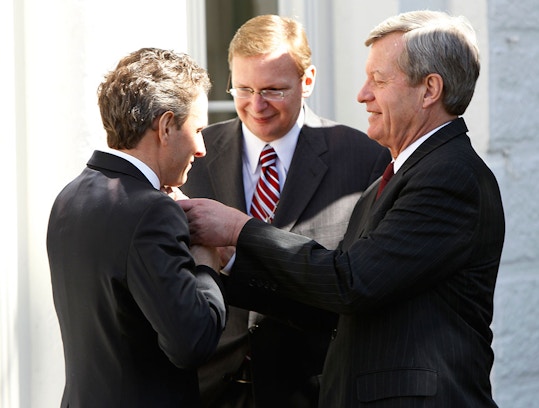 By the time he turned 40 in October 2009, Messina was a Washington VIP. His birthday party — “ROCK OUT WITH JIM MESSINA AS HE TURNS 40!”, said the emailed invitation — was held at the Gibson, a trendy D.C. bar, and hosted by Baucus, Emanuel, Pete Rouse, then a senior Obama advisor, and Jim Crounse, one of Messina’s closest friends, a former Baucus chief of staff and now one of the top Democratic direct mail consultants in the country.

Three years later, Messina’s star had risen even further — he was in charge of Obama’s 2012 reelection. He reportedly was one of the few White House officials to become close to Obama, even taking the president trout fishing in Montana.

Last year, Messina immediately hit pay dirt by opening a consulting firm called The Messina Group. (What else? In his firm bio he modestly describes himself as the “mastermind” behind Obama’s re-election.) He’s been retained by, among many others, the American Gaming Association and British Conservative Party leader David Cameron.

Messina also had a $15,000-a-month consulting agreement with the Democratic National Committee and various other gigs with Obama-linked groups. He’s also chair of Priorities USA, the super PAC that raised $85 million for Obama’s reelection and now is drumming up cash for Hillary Clinton.

And then there’s the money he’s raking in for speaking engagements at the American Petroleum Institute and at an energy industry conference in Azerbaijan, whose president was compared in a Wikileak-ed cable to Michael Corleone. His fee is reportedly $50,000, but that’s a bargain to get his insights on topics like “The Moneyball President: How the Obama Reelection Campaign Handled Its Business—and Why It Matters for Yours.”

And then there are still more fees he nets for sitting on the boards of “green” energy companies like LanzaTech, which has received money from the Obama administration.

It’s all pretty astonishing, even by Washington standards. “No one here is a virgin, but this is pretty flagrant,” one Democratic Party insider told me. (Disclosure: He doesn’t like Messina and might be jealous.)

A Politico story in February detailed much of Messina’s money-grubbing, but said there was little evidence that he had “splurged in the year or so since he started reeling in private-sector paydays.” Politico reported Messina had recently “sold for $425,000 a modest Maryland home that he had owned for about seven years.”

But about three months later, Messina did splurge, though it looks like he did his best to keep it out of the news. Public records I found suggested that last May he had purchased a $1.9 million home in one of Washington’s swankiest neighborhoods. “High quality finishes in a tremendous location,”says this Zillow item. “Five bedroom, 4.5 bath Brick home can flow from formal to casual with ease. Walkout of the Master Suite to your private balcony. Sun room leads you to backyard that is a private oasis.”

I said “suggested” because the property was not bought in Messina’s name. The house is  owned through an anonymous trust, but various clues point back to Messina. For example, Messina’s old pal, Democratic operative Crounse, represents the trust that was used to purchase the house.

Early last evening, Intercept national security editor Sharon Weinberger and I dropped by the house. It was a scene out of Norman Rockwell. A big, bouncy dog curled up on the floor in the living room and cheery Christmas stockings over the crackling fireplace.

We knocked on the door of the house and, to our great happiness and surprise, Messina opened it. It was a short conversation.

“I saw from public records that you owned this house and just wanted to make sure,” I said.

“OK,” he said. He was smiling but didn’t look happy.

It’s a long way from Idaho, Jim, but congratulations. You found your place in D.C.