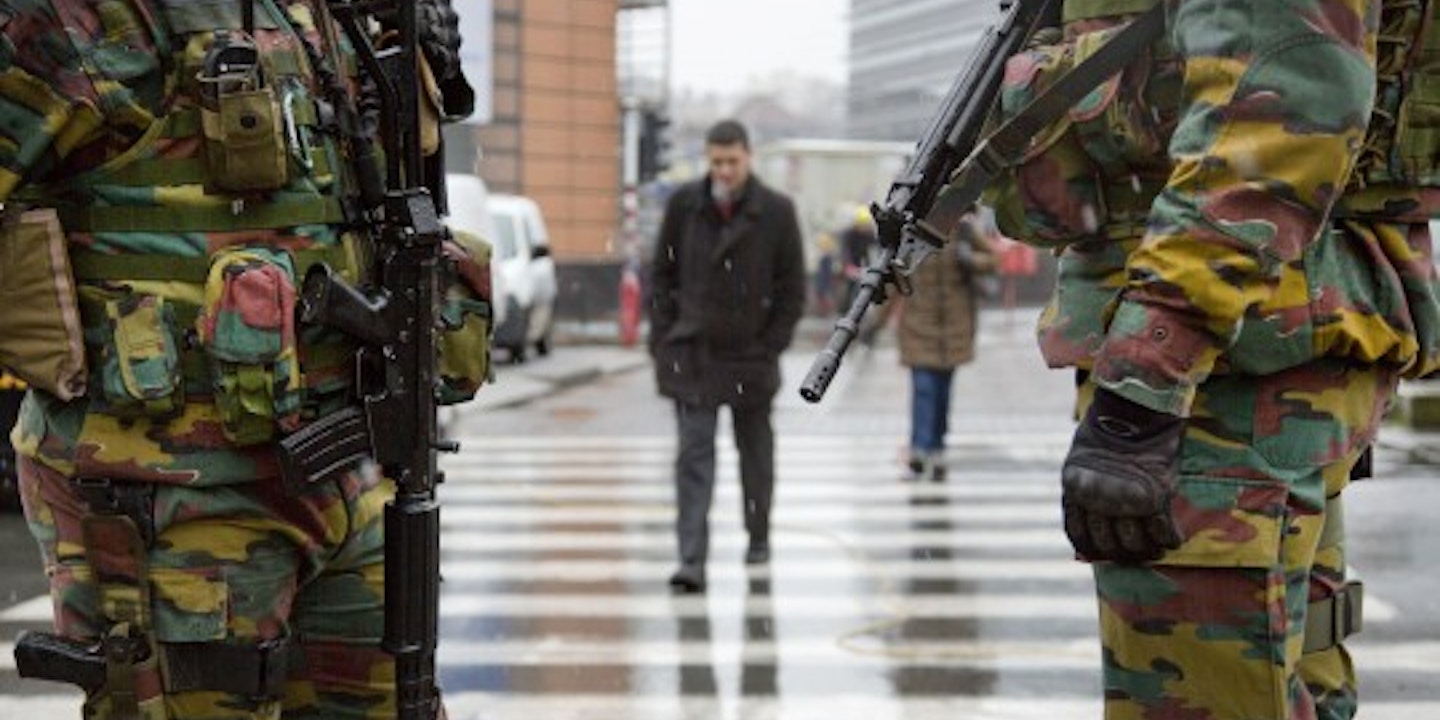 In an atmosphere of fear after the deadly attack on the French magazine Charlie Hebdo, officials in the European Union are proposing an array of anti-terror initiatives, including new surveillance laws that would give security agencies greater access to personal data.

A key measure under consideration is a data-retention law which would replace one that the EU’s highest court struck down last year for infringing on fundamental rights. The push for extra surveillance comes as police authorities in Europe warn of imminent attacks by extremists. An anti-Islam march in Germany and a counter-rally for tolerance have been called off after alleged threats of violence, heavily armed police and special forces are guarding Jewish schools as well as news organizations across northern Europe, and the EU has raised its terror alert status to “yellow” – the third-highest level.

The violence in Paris—a kosher market was attacked a day after the assault on Charlie Hebdo—was followed a week later by a police raid in Belgium that killed two suspected militants. Concerns of more attacks have triggered debates across the continent about the right balance between security and civil liberties. Left-leaning parties and civil rights advocates are warning, however, of an over-reaction. They contend that current laws are mostly sufficient and that law enforcement agencies do not need substantial new powers, just adequate funding and better ways to share information. France, for instance, already has many of the anti-terror laws in place that German Chancellor Angela Merkel and others are now calling for across Europe – but the French laws obviously did not prevent the attacks in Paris.

Merkel has called for the EU to accelerate passage of a new law that would authorize the collection and storage of vast amounts of personal data, though she hasn’t released details of her plan. Last spring, the European Court of Justice ruled that the Data Retention Directive, approved in 2006, was invalid because it constituted “suspicionless mass surveillance” which the court considered disproportionate and in violation of fundamental rights. The directive had required all EU states to adopt national legislation mandating that communication companies store the private data of EU citizens for at least six months but no more than 24 months. Police and security agencies could request access to Internet Protocol addresses as well as the time every email, phone call or text message was sent or received; court approval was required for law enforcement authorities to access the data. Many observers thought the court ruling spelled the end for any kind of data-retention law in the EU—until the Charlie Hebdo attack.

The rejected directive, which had been adopted in many EU countries, remains valid in France today, raising the question of how—or whether—such laws help prevent terrorist acts. France has some of the stiffest anti-terrorism decrees in Europe but this did not thwart the Paris assaults. The German version of the EU directive was struck down as unconstitutional by a German court in 2010, well before the EU ruling last spring. Austria’s data law has also been scratched from the books, and the Dutch version faces a legal challenge initiated by civil rights organizations.

Merkel is encountering opposition from inside her own cabinet, which is composed of a coalition of political parties. Justice Minister Heiko Maas, a member of the Social Democratic Party, flatly rejected the reintroduction of a new data law. “This kind of data retention violates basic rights,” he said. “The European Court of Justice clearly established this.”

Meanwhile, Maas and most German politicians are pushing to toughen other counter-terrorism laws. Maas says his ministry will look at new measures to ban the financing of terrorist groups and to prevent people from traveling abroad to train and fight in radical Islamist forces. Most European countries are considering travel bans. Last year the United Nations passed resolution 2178–restricting the international flow of fighters to and from conflict zones, which Secretary General Ban Ki-Moon urged all UN signatories to adopt. France already has such a ban in place.

The European Commission backs moves by its member states to seize the passports of people suspected of traveling abroad to fight with Islamic militants, or intending to do that. France passed such a law in November and it entered into force last week. The Commission, which is the executive body of the EU, is discussing further moves this week, including stiffer border controls, better intelligence sharing, access to flight passenger registers, and even the establishment of an EU security agency. The sharing of air travel records, known as passenger name records, is hotly contested among EU lawmakers who have blocked it since 2013; if enacted, it would result in millions of EU travelers having their personal data on file for years.

Estimates of the threat of Islamic extremists in Europe vary widely. Europol, the law enforcement agency of the EU, estimates that between 3,000 and 5,000 European nationals pose a threat to security, most of these young men who fought alongside Islamic militants in Syria and Iraq. In Germany, intelligence services estimate there are about 260 citizens with “Islamic terrorist” potential. According to the Brookings Institution, there are at least 920 returned foreign fighters living in France, most with battlefield experience in Syria and Iraq. Belgium and Britain are believed to each have at least several hundred former fighters, with smatterings elsewhere in the EU, from Kosovo to Finland.

Currently, Europe’s only trans-national intelligence agency is the EU Intelligence Analysis Center, which has few powers and almost no real intelligence-gathering network; national governments, especially in Europe’s biggest states, are extremely reluctant to give up or pool their activities. But countries like Italy have backed a common intelligence agency for years, with sound reasons. A trans-national agency might be better placed to address cross-border threats like Islamic extremist groups, while enhancing cooperation throughout the EU, which just about everybody agrees is lacking.

Better cooperation and coordination might, for example, obviate the need for the kind of new border controls that Madrid, Paris and Berlin apparently have in mind. They’ve called for the reinstatement of some internal border controls within the EU, a demand that would most likely impact the EU’s poorer countries that are close to volatile, unstable regions like eastern Europe, the Balkans, and the Middle East. Passport-free travel across the EU is one of the union’s proudest and most popular achievements.

Europe’s security agencies are also pleading for new powers to monitor the Internet and social media. The director of Interpol, Ron Wainwright, told the BBC there was a “security gap” facing police forces in Europe involved in tracking extremists on the Internet. Potential terrorists, he said, were “effectively out of reach” of law enforcement agencies. “The reality is the security authorities today don’t have the necessary capability to fully protect society from these kind of threats,” he said.

In this vein, British Prime Minister David Cameron has called for new laws that stop technology companies from protecting their users’ data with encryption technology. Cameron’s comments were roundly criticized by security experts as well as the UK’s data watchdog, Christopher Graham, who warned against “knee-jerk reactions” that would undermine consumer security. In Germany, the opposition Green Party argues that more funding, rather than new laws, would enable police forces to better do their jobs, such as monitoring extremists. Tip-offs and intelligence about possible terrorist acts have to be followed up on, notes the Green parliamentarian Anton Hofreiter.

“You manage that best by a well-equipped police who have enough money and personnel,” he said, adding that it is entirely legitimate to place surveillance on people like those who carried out the Paris attacks. “It doesn’t help anything to monitor the entire population,” he said.

But this, say the Greens and other critics, is just the tip of the iceberg. The much larger problem is to get at the root causes of the growth and militancy of Islamic extremism across northern Europe. The discourse in Europe around Islam has grown harsher in recent years, with openly Islamophobic parties taking more votes and seats in national and EU legislatures. Moreover, the kind of alienation and disenfranchisement that drives young people into the hands of Islamic militants can only be rectified by devoting more resources to help their communities.

For instance, commentator Heribert Prantl, writing in Süddeutsche Zeitung, called for a new dialogue with Europe’s Muslim communities. “Tougher penalties, expulsion, the revocation of citizenship: None of this will help in hindering the radicalization of young German jihadists,” he wrote. “In order to fight effectively against Islamist disorders, Germany needs the Muslims as a partner. Islam is not the problem, but part of the solution.”