Hailed as a Model for Successful Intervention, Libya Proves to be the Exact Opposite

Libya shows how the West’s wars are empowering its enemies and thus fueling endless conflict.

When Saddam Hussein was captured in 2003 by U.S. forces, Iraq War advocates boastfully celebrated the event as proof that they were right and used it to mock war opponents (Joe Lieberman and John Kerry, for instance, gleefully exploited the event to demand that Howard Dean admit his war opposition was wrong). When Muammar Gaddafi was forced by NATO bombing in August 2011 to flee Tripoli, advocates of U.S. intervention played the same game (ThinkProgress gleefully exploited the occasion to try to shame those who objected to the illegality of Obama’s waging the war even after Congress voted against its authorization: as though Gadaffi’s fleeing could render legal Obama’s plainly illegal intervention).

Once Gadaffi was brutally killed by a mob, advocates of intervention threw a giddy party for themselves, celebrating their own rightness and righteousness and declaring Libya a model for future Western interventions. Upon Gadaffi’s fleeing, The New York Times, which editorially supported the war, published a front-page article declaring: “U.S. Tactics in Libya May be a Model for Other Efforts.” While acknowledging that “it would be premature to call the war in Libya a complete success for United States interests,” the paper noted that events had given “Obama’s senior advisers a chance to claim a key victory for an Obama doctrine for the Middle East that had been roundly criticized in recent months as leading from behind.” 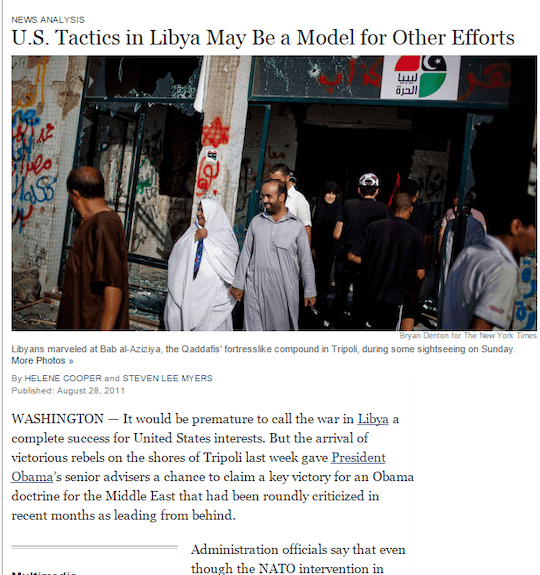 Leading war advocates such as Anne-Marie Slaughter and Nick Kristof celebrated themselves as humanitarian visionaries and chided war opponents for being blinkered and overly cynical about the virtues of American force. British and French leaders descended upon Libya to strut around like some sort of conquering heroes, while American and Canadian officials held pompous war victory ceremonies. Hillary Clinton was downright sociopathic, gloating and cackling in an interview when told about Gadaffi’s death by mob: “We came, we saw, he died.” Democratic partisans were drowning in similar bravado (“Unlike the all-hat-no-cattle types we are increasingly seeing over there, [Obama] may take his time, but he does seem to get his man”). From the start, it was glaringly obvious that all of this was, at best, wildly premature. As I wrote the day after Gadaffi fled, the Democratic claims of vindication were redolent in all sorts of ways of war hawk boasting after Saddam was captured, and were just as irrational: “the real toll of this war (including the number of civilian deaths that have occurred and will occur) is still almost entirely unknown, and none of the arguments against the war (least of all the legal ones) are remotely resolved by yesterday’s events.”

Since 2011, Libya has rapidly unraveled in much the way Iraq did following that invasion: swamped by militia rule, factional warfare, economic devastation, and complete lawlessness. And to their eternal shame, most self-proclaimed “humanitarians” who advocated the Libya intervention completely ignored the country once the fun parts — the war victory dances and mocking of war opponents — were over. The feel-good “humanitarianism” of war advocates, as usual, extended only to the cheering from a safe distance as bombs dropped.

The unraveling of Libya is now close to absolute. Yesterday, the same New York Times editorial page that supported the intervention quoted the U.N.’s Libya envoy Bernardino León as observing: “Libya is falling apart. Politically, financially, the economic situation is disastrous.” The NYT editors forgot to mention that they supported the intervention, but did note that “Libya’s unraveling has received comparatively little attention over the past few months.” In other words, the very same NATO countries that dropped bombs on Libya in order to remove its government collectively ignored the aftermath once their self-celebrations were over.

Into the void of Libya’s predictable disintegration has stepped ISIS, among other groups. ISIS yesterday released a new video showing the beheading of 21 Egyptian Coptic Christians, which they carried out in Libya. This, in turn, led to all sorts of dire warnings about how close ISIS now is to Europe — it “established a direct affiliate less than 500 miles (800 kilometers) from the southern tip of Italy,” warned AP — which in turn has produced calls for re-intervention in Libya. Yesterday, the U.S.-supported Egyptian regime bombed targets in Libya. Meanwhile, “Italy warned that ISIS is at Europe’s doorstep as France and Egypt called for the United Nations Security Council to meet over the spiraling crisis in Libya.” It’s only a matter of time before another Western “intervention” in Libya becomes conventional wisdom, with those opposed being accused of harboring sympathy for ISIS (just as opponents of Libya intervention the first time around were accused of being indifferent to Gadaffi’s repression).

What we see here is what we’ve seen over and over: the West’s wars creating and empowering an endless supply of enemies, which in turn justify endless war by the West. It was the invasion of Iraq that ushered in “Al Qaeda in Iraq” and ultimately ISIS. It has been the brutal, civilian-slaughtering drone bombing of Yemen which spawned Al Qaeda in the Arabian Peninsula in that country. As Hillary Clinton herself acknowledged, the U.S. helped create Al Qaeda itself by arming, recruiting and funding foreign “Mujahideen” to fight the Soviet invasion of Afghanistan (“the people we are fighting today, we funded 20 years ago”). And now it is the NATO intervention in Libya which has laid the groundwork for further intervention.

That the U.S. would end up intervening in Libya again as a result of the first intervention was painfully obvious. A primary argument of intervention opponents was that the same destruction sown in Iraq from “regime change” would be sown in Libya, and that the U.S. would end up empowering factions that it would later claim it was “obligated” to fight. In October 2012, as Libya was disintegrating, I wrote:

Rather obviously, this was yet another example of the “Mission Accomplished” banner being waved quite prematurely. How many times does it need be proven that merely killing a dictator does not remotely guarantee an improvement from either the perspective of US interests or the people in the country being invaded? And how many more examples do we need where the US funds and arms a fighting force to do its bidding, only to turn around and find that it now must fight that same force?

One can debate whether all of this is done by design or by “accident”: if you realize that U.S. actions create further pretexts for war, then those who do this for a living must realize it, too (their own studies say this); and how many times does something have to happen before “accident” is no longer a viable explanation (as in: oops, our bombing policies keep killing large numbers of civilians, but we keep doing it anyway, and keep claiming it’s all just a terrible “accident”)? But whatever else is true about motive, there is no question that U.S. militarism constantly strengthens exactly that which it is pitched as trying to prevent, and ensures that the U.S. government never loses its supply of reasons to continue its endless war.

Far from serving as a model, this Libya intervention should severely discredit the core selling point of so-called “humanitarian wars.” Some non-governmental advocates of “humanitarian war” may be motivated by the noble aims they invoke, but humanitarianism is simply not why governments fight wars; that is just the pretty wrapping used to sell them.

Finally, Democrats (with validity) love to demand that Iraq War advocates acknowledge their errors and be discredited for their position (unless those advocates happen to be Obama’s Vice President, his two Secretaries of State, his Pentagon chiefs, etc.). We are rapidly approaching the point, if we are not there already, where advocates of “intervention” in Libya should do the same.

Photo Caption: Libyan militias from towns throughout the country’s west parade through Tripoli, Libya selling arms at what once use to be a fish market, Feb. 14, 2012.  Credit: Abdel Magid Al Fergany/AP