Poitras, a founding editor of The Intercept, won an Academy Award for her documentary about Edward Snowden, the National Security Agency whistleblower. 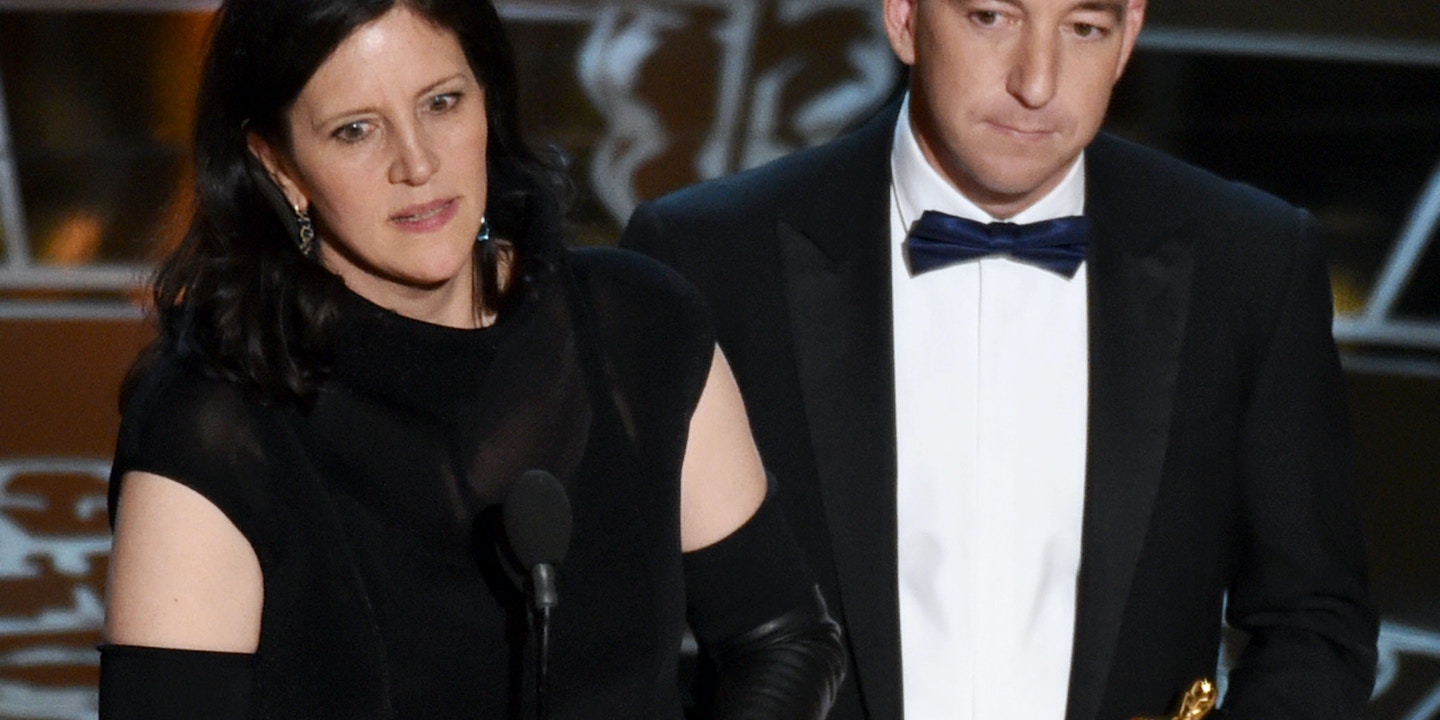 Laura Poitras, a founding editor of The Intercept, won an Academy Award tonight for her documentary “Citizenfour,” an inside look at Edward Snowden, the National Security Agency whistleblower.

“The disclosures that Edward Snowden revealed don’t only expose a threat to our privacy but to our democracy itself,” Poitras said in her acceptance speech. “Thank you to Edward Snowden for his courage and for the many other whistleblowers.” Snowden, in a statement released after the award was announced, said, “My hope is that this award will encourage more people to see the film and be inspired by its message that ordinary citizens, working together, can change the world.”

The film, which has been hailed as a real-life thriller, chronicles Snowden’s effort to securely contact Poitras and Glenn Greenwald in 2013 and meet them in Hong Kong, where Poitras filmed Snowden discussing the thousands of classified NSA documents he was leaking to them, and his motives for doing so. The film takes its title from the pseudonym Snowden used when he contacted Poitras in encrypted emails that were revealed in her documentary.

“If you publish the source material,” one of his first emails said, “I will likely be immediately implicated. This must not deter you from releasing the information I will provide. Thank you, and be careful.”

“Citizenfour” received widespread acclaim when it was released last year. The New York Times said it was “a primal political fable for the digital age,” while Indiewire described it as “the stuff of Orwellian nightmares … it plays like the greatest paranoid thriller since ‘All the President’s Men.’” Prior to the Academy Awards, it won a number of prizes for best documentary from the New York Film Critics Circle, the Directors Guild of America and other organizations.

The documentary is centered around the extraordinary footage Poitras shot of Snowden in his hotel room with Greenwald and Guardian reporter Ewen MacAskill, who also travelled to Hong Kong. The film includes scenes of Snowden preparing to leave the hotel to go into hiding after the first NSA stories were published, along with a video interview in which Snowden revealed his identity. Snowden eventually slipped out of Hong Kong and, after becoming stranded in Moscow’s Sheremetyevo airport, was offered political asylum in Russia, where he currently resides.

The documents leaked by Snowden have revealed the NSA’s dragnet surveillance of American phone records, as well as the agency’s extensive efforts to infiltrate and compromise global telecommunications networks. The NSA’s activities have been condemned by civil liberties advocates in the United States as well as by foreign governments that have been spied on by the agency. The stories written about the documents have earned Pulitzer Prizes for The Guardian and The Washington Post (which also received documents from Snowden). Those publications, as well as The Intercept and other news organizations, including Der Spiegel in Germany, continue to publish major stories about the NSA’s surveillance activities, such as an article just a few days ago that revealed the NSA and its British counterpart, the GCHQ, had stolen billions of cellphone encryption keys from a Dutch firm.

Poitras, who in 2012 was awarded a MacArthur Foundation “genius” grant, had earned an Academy Award nomination for a previous film, “My Country, My Country,” about the Iraq war. Released in 2006, it was the first in a trilogy of films about America after 9/11; the second, released in 2010, was “The Oath,” filmed in Yemen and Guantánamo Bay. “Citizenfour” is the final film in the trilogy, which Poitras has described as an examination of American power in the war on terror.

Poitras herself came under the type of government surveillance that the Snowden documents outline. After her Iraq film was released, she was stopped dozens of times at U.S. and foreign airports and questioned by border agents; her name had apparently been placed on one of the U.S. government’s terrorism watchlists. This put her into an unusual position — a documentarian who was under surveillance while working on a documentary about surveillance.

It was a short film by Poitras about the NSA, focusing on whistleblower William Binney, that brought her to the attention of Snowden. He saw the film, which was called “The Program” and was published as a New York Times op-doc in 2012, and realized Poitras was reporting on the NSA and that she probably had enough knowledge of encryption practices to communicate with him securely. He later explained that he trusted her and Greenwald, who is another founding editor of The Intercept, more than any major media outlets in the post-9/11 era.

“Laura and Glenn are among the few who reported fearlessly on controversial topics throughout this period, even in the face of withering personal criticism, and resulted in Laura specifically becoming targeted by the very programs involved in the recent disclosures,” Snowden has said. “She had demonstrated the courage, personal experience and skill needed to handle what is probably the most dangerous assignment any journalist can be given — reporting on the secret misdeeds of the most powerful government in the world.”

Poitras, who studied film at the San Francisco Art Institute and political theory at The New School before turning to journalism, will have a solo exhibition at the Whitney Museum in 2016.

This story was updated with comments from Poitras and Snowden.