The world’s largest maker of SIM cards is downplaying the hack by US and British spies. But security experts say the company is underestimating the NSA and GCHQ. 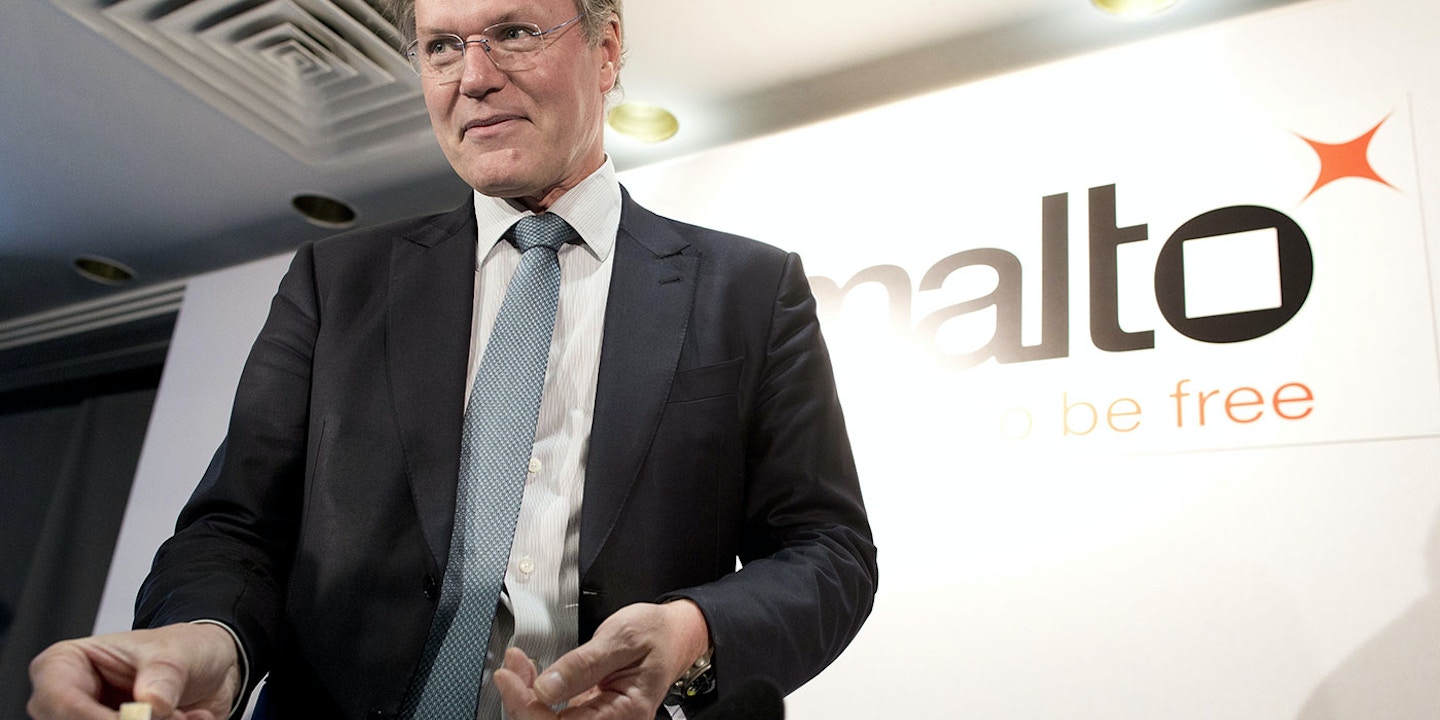 Gemalto, the French-Dutch digital security giant, confirmed that it believes American and British spies were behind a “particularly sophisticated intrusion” of its internal computer networks, as reported by The Intercept last week.

This morning, the company tried to downplay the significance of NSA and GCHQ efforts against its mobile phone encryption keys — and, in the process, made erroneous statements about cellphone technology and sweeping claims about its own security that experts describe as highly questionable.

Gemalto, which is the largest manufacturer of SIM cards in the world, launched an internal investigation after The Intercept six days ago revealed that the NSA and its British counterpart GCHQ hacked the company and cyberstalked its employees. In the secret documents, provided by NSA whistleblower Edward Snowden, the intelligence agencies described a successful effort to obtain secret encryption keys used to protect hundreds of millions of mobile devices across the globe.

The company was eager to address the claims that its systems and encryption keys had been massively compromised. At one point in stock trading after publication of the report, Gemalto suffered a half billion dollar hit to its market capitalization. The stock only partially recovered in the following days.

After the brief investigation, Gemalto now says that the NSA and GCHQ operations in 2010-2011 would not allow the intelligence agencies to spy on 3G and 4G networks, and that theft would have been rare after 2010, when it deployed a “secure transfer system.” The company also said the spy agency hacks only affected “the outer parts of our networks — our office networks — which are in contact with the outside world.”

Security experts and cryptography specialists immediately challenged Gemalto’s claim to have done a “thorough” investigation into the state-sponsored attack in just six days, saying the company was greatly underestimating the abilities of the NSA and GCHQ to penetrate its systems without leaving detectable traces.

“Gemalto learned about this five-year-old hack by GCHQ when the The Intercept called them up for a comment last week. That doesn’t sound like they’re on top of things, and it certainly suggests they don’t have the in-house capability to detect and thwart sophisticated state-sponsored attacks,” says Christopher Soghoian, the chief technologist at the American Civil Liberties Union. He adds that Gemalto remains “a high-profile target for intelligence agencies.”

Matthew Green, a cryptography specialist at the Johns Hopkins Information Security Institute, said, “This is an investigation that seems mainly designed to produce positive statements. It is not an investigation at all.”

In its statement, Gemalto asserted:

“While the intrusions described above were serious, sophisticated attacks, nothing was detected in other parts of our network. No breaches were found in the infrastructure running our SIM activity or in other parts of the secure network which manage our other products such as banking cards, ID cards or electronic passports. Each of these networks is isolated from one another and they are not connected to external networks.

It is extremely difficult to remotely attack a large number of SIM cards on an individual basis. This fact, combined with the complex architecture of our networks explains why the intelligence services instead, chose to target the data as it was transmitted between suppliers and mobile operators as explained in the documents.”

But security and encryption experts told The Intercept that Gemalto’s statements about its investigation contained a significant error about cellphone technology. The company also made sweeping, overly-optimistic statements about the security and stability of Gemalto’s networks, and dramatically underplayed the significance of the NSA-GCHQ targeting of the company and its employees. “Their ‘investigation’ seem to have consisted of asking their security team which attacks they detected over the past few years. That isn’t much of an investigation, and it certainly won’t reveal successful nation-state attacks,” says the ACLU’s Soghoian.

Security expert Ronald Prins, co-founder of the Dutch firm Fox IT, told The Intercept, “A true forensic investigation in such a complex environment is not possible in this time frame.”

“A damage assessment is more what this looks like,” he added.

In a written presentation of its findings, Gemalto claims that “in the case of an eventual key theft, the intelligence services would only be able to spy on communications on second generation 2G mobile networks. 3G and 4G networks are not vulnerable.” Gemalto also referred to its own “custom algorithms” and other, unspecified additional security mechanisms on top of the 3G and 4G standards.

“No encryption mechanism stands up to key theft,” Green says, “which means Gemalto is either convinced that the additional keys could not also have been stolen or they’re saying that their mechanisms have some proprietary ‘secret sauce’ and that GCHQ, backed by the resources of NSA, could not have reverse engineered them. That’s a deeply worrying statement.”

“I think you could make that statement against some gang of Internet hackers,” Green adds. “But you don’t get to make it against nation state adversaries. It simply doesn’t have a place in the conversation. They are saying that NSA/GCHQ could not have breached those technologies due to ‘additional encryption’ mechanisms that they don’t specify, and yet here we have evidence that GCHQ and NSA were actively compromising encryption keys.”

In a press conference today in Paris, Gemalto’s CEO, Olivier Piou, said his company will not take legal action against the NSA and GCHQ. “It’s difficult to prove our conclusions legally, so we’re not going to take legal action,” he said. “The history of going after a state shows it is costly, lengthy and rather arbitrary.”

There has been significant commercial pressure and political attention placed on Gemalto since The Intercept’s report. Wireless network providers on multiple continents demanded answers and some, like Deutsche Telekom, took immediate action to change their encryption algorithms on Gemalto-supplied SIM cards. The Australian Privacy Commissioner has launched an investigation and several members of the European Union parliament and Dutch parliament have asked individual governments to launch investigations. German opposition lawmakers say they are initiating a probe into the hack as well.

On Wednesday, Gerard Schouw, a member of the Dutch parliament, submitted formal questions about the Gemalto hack and the findings of the company’s internal investigation to the interior minister. “Will the Minister address this matter with the Ambassadors of the United States and the United Kingdom? If not, why is the Minister not prepared to do so? If so, when will the Minister do this?” Schouw asked. “How does the Minister assess the claim by Gemalto that the attack could only lead to wiretapping 2G-network connections, and that 3G and 4G-type networks are not susceptible to this kind of hacks?”

China Mobile, which uses Gemalto SIM cards, has more wireless network customers than any company in the world. This week it announced it was investigating the breach and the Chinese government said it was “concerned” about the Gemalto hack. “We are opposed to any country attempting to use information technology products to conduct cyber surveillance,” Foreign Ministry spokesman Hong Lei said. “This not only harms the interests of consumers but also undermines users’ confidence.” He did not mention that China itself engages in widespread, state-sponsored hacking.

While Gemalto is clearly trying to calm its investors and customers, security experts say the company’s statements appear intended to reassure the public about the company’s security rather than to demonstrate that it is taking the breach seriously.

The documents published by The Intercept relate to hacks done in 2010 and 2011. The idea that spy agencies are no longer targeting the company — and its competitors — with more sophisticated intrusions, according to Soghoian, is ridiculous. “Gemalto is as much of an interesting target in 2015 as they were in 2010. Gemalto’s security team may want to keep looking, not just for GCHQ and NSA, but also, for the Chinese, Russians and Israelis too,” he said.

Green, the Johns Hopkins cryptographer, says this hack should be “a wake-up call that manufacturers are considered valuable targets by intelligence agencies. There’s a lot of effort in here to minimize and deny the impact of some old attacks, but who cares about old attacks? What I would like to see is some indication that they’re taking this seriously going forward, that they’re hardening their systems and closing any loopholes — because loopholes clearly existed. That would make me enormously more confident than this response.”

Green says that the Gemalto hack evidences a disturbing trend that is on the rise: the targeting of innocent employees of tech firms and the companies themselves. (The same tactic was used by GCHQ in its attack on Belgian telecommunications company Belgacom.)

“Once upon a time we might have believed that corporations like this were not considered valid targets for intelligence agencies, that GCHQ would not go after system administrators and corporations in allied nations. All of those assumptions are out the window, so now we’re in this new environment, where everyone is a valid target,” he says. “In computer security, we talk about ‘threat models,’ which is a way to determine who your adversary is, and what their capabilities are. This news means everyone has to change their threat model.”