Why Does the FBI Have to Manufacture its Own Plots if Terrorism and ISIS Are Such Grave Threats?

This tactic is akin to having the DEA constantly warn of the severe threat posed by drug addiction while it simultaneously uses pushers on its payroll to deliberately get people hooked on drugs so that they can arrest the addicts they’ve created and thus justify their own warnings and budgets.

The FBI and major media outlets yesterday trumpeted the agency’s latest counterterrorism triumph: the arrest of three Brooklyn men, ages 19 to 30, on charges of conspiring to travel to Syria to fight for ISIS (photo of joint FBI/NYPD press conference, above). As my colleague Murtaza Hussain ably documents, “it appears that none of the three men was in any condition to travel or support the Islamic State, without help from the FBI informant.” One of the frightening terrorist villains told the FBI informant that, beyond having no money, he had encountered a significant problem in following through on the FBI’s plot: his mom had taken away his passport. Noting the bizarre and unhinged ranting of one of the suspects, Hussain noted on Twitter that this case “sounds like another victory for the FBI over the mentally ill.”

In this regard, this latest arrest appears to be quite similar to the overwhelming majority of terrorism arrests the FBI has proudly touted over the last decade. As my colleague Andrew Fishman and I wrote last month — after the FBI manipulated a 20-year-old loner who lived with his parents into allegedly agreeing to join an FBI-created plot to attack the Capitol — these cases follow a very clear pattern:

The known facts from this latest case seem to fit well within a now-familiar FBI pattern whereby the agency does not disrupt planned domestic terror attacks but rather creates them, then publicly praises itself for stopping its own plots.

First, they target a Muslim: not due to any evidence of intent or capability to engage in terrorism, but rather for the “radical” political views he expresses. In most cases, the Muslim targeted by the FBI is a very young (late teens, early 20s), adrift, unemployed loner who has shown no signs of mastering basic life functions, let alone carrying out a serious terror attack, and has no known involvement with actual terrorist groups.

They then find another Muslim who is highly motivated to help disrupt a “terror plot”: either because they’re being paid substantial sums of money by the FBI or because (as appears to be the case here) they are charged with some unrelated crime and are desperate to please the FBI in exchange for leniency (or both). The FBI then gives the informant a detailed attack plan, and sometimes even the money and other instruments to carry it out, and the informant then shares all of that with the target. Typically, the informant also induces, lures, cajoles, and persuades the target to agree to carry out the FBI-designed plot. In some instances where the target refuses to go along, they have their informant offer huge cash inducements to the impoverished target.

Once they finally get the target to agree, the FBI swoops in at the last minute, arrests the target, issues a press release praising themselves for disrupting a dangerous attack (which it conceived of, funded, and recruited the operatives for), and the DOJ and federal judges send their target to prison for years or even decades (where they are kept in special GITMO-like units). Subservient U.S. courts uphold the charges by applying such a broad and permissive interpretation of “entrapment” that it could almost never be successfully invoked.

Once again, we should all pause for a moment to thank the brave men and women of the FBI for saving us from their own terror plots. One can, if one really wishes, debate whether the FBI should be engaging in such behavior. For reasons I and many others have repeatedly argued, these cases are unjust in the extreme: a form of pre-emptory prosecution where vulnerable individuals are targeted and manipulated not for any criminal acts they have committed but rather for the bad political views they have expressed. They end up sending young people to prison for decades for “crimes” which even their sentencing judges acknowledge they never would have seriously considered, let alone committed, in the absence of FBI trickery. It’s hard to imagine anyone thinking this is a justifiable tactic, but I’m certain there are people who believe that. Let’s leave that question to the side for the moment in favor of a different issue.

We’re constantly bombarded with dire warnings about the grave threat of home-grown terrorists, “lone wolf” extremists and ISIS. So intensified are these official warnings that The New York Times earlier this month cited anonymous U.S. intelligence officials to warn of the growing ISIS threat and announce “the prospect of a new global war on terror.”

But how serious of a threat can all of this be, at least domestically, if the FBI continually has to resort to manufacturing its own plots by trolling the Internet in search of young drifters and/or the mentally ill whom they target, recruit and then manipulate into joining? Does that not, by itself, demonstrate how over-hyped and insubstantial this “threat” actually is? Shouldn’t there be actual plots, ones that are created and fueled without the help of the FBI, that the agency should devote its massive resources to stopping?

This FBI tactic would be akin to having the Drug Enforcement Agency (DEA) constantly warn of the severe threat posed by drug addiction while it simultaneously uses pushers on its payroll to deliberately get people hooked on drugs so that they can arrest the addicts they’ve created and thus justify their own warnings and budgets (and that kind of threat-creation, just by the way, is not all that far off from what the other federal law enforcement agencies, like the FBI, are actually doing). As we noted the last time we wrote about this, the Justice Department is aggressively pressuring U.S. allies to employ these same entrapment tactics in order to create their own terrorists, who can then be paraded around as proof of the grave threat.

Threats that are real, and substantial, do not need to be manufactured and concocted. Indeed, as the blogger Digby, citing Juan Cole, recently showed, run-of-the-mill “lone wolf” gun violence is so much of a greater threat to Americans than “domestic terror” by every statistical metric that it’s almost impossible to overstate the disparity: 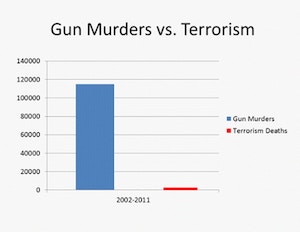 In that regard, it is not difficult to understand why “domestic terror” and “homegrown extremism” are things the FBI is desperately determined to create. But this FBI terror-plot concoction should, by itself, suffice to demonstrate how wildly exaggerated this threat actually is.

UPDATE: The ACLU of Massachusetts’s Kade Crockford notes this extraordinarily revealing quote from former FBI assistant director Thomas Fuentes, as he defends one of the worst FBI terror “sting” operations of all (the Cromitie prosecution we describe at length here):

If you’re submitting budget proposals for a law enforcement agency, for an intelligence agency, you’re not going to submit the proposal that “We won the war on terror and everything’s great,” cuz the first thing that’s gonna happen is your budget’s gonna be cut in half. You know, it’s my opposite of Jesse Jackson’s ‘Keep Hope Alive’—it’s ‘Keep Fear Alive.’ Keep it alive.

That is the FBI’s terrorism strategy — keep fear alive — and it drives everything they do.