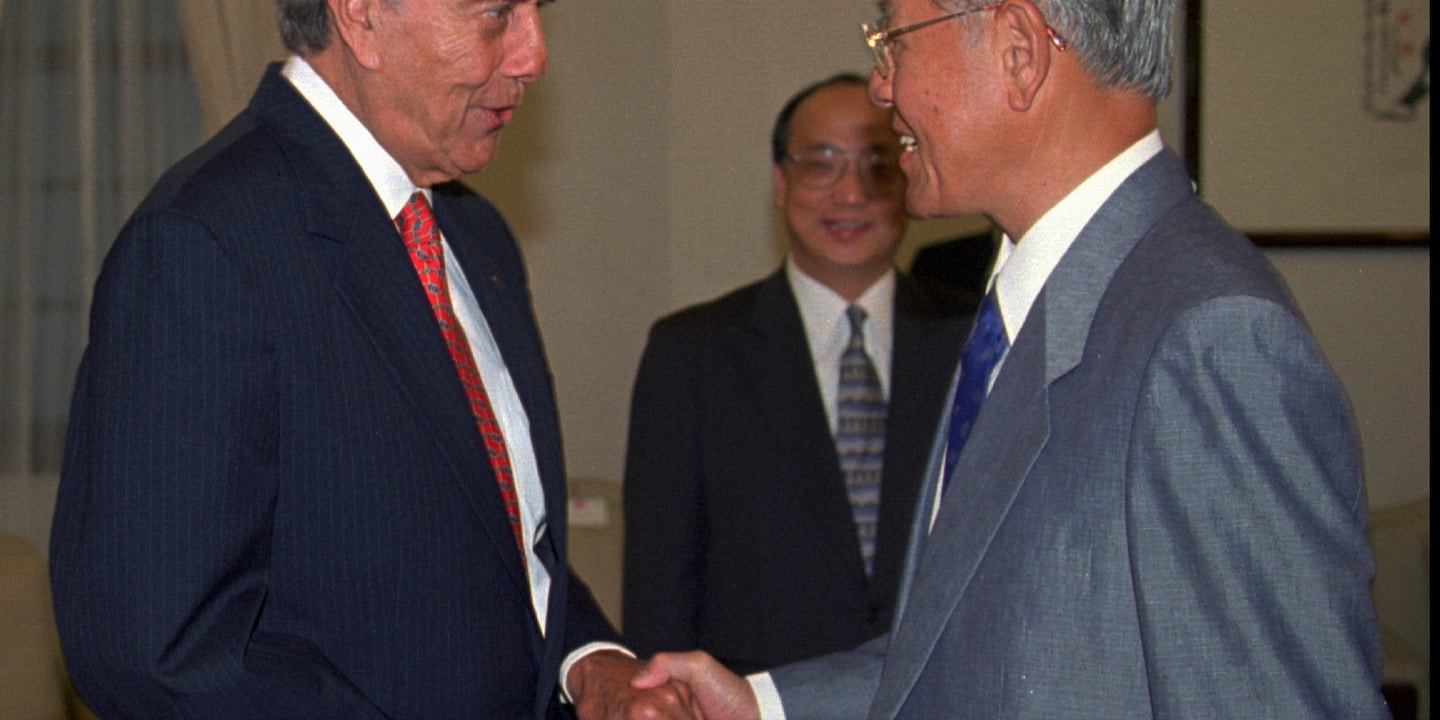 When the Republican National Committee convened in Chicago last August for its annual summer meeting, it unanimously approved a resolution urging the White House to supply a host of weapons, ranging from submarines to advanced warplanes, to the island nation of Taiwan.

However, Justice Department records show the resolution was not written by any of the RNC’s members, but by Marshall Harris, a lobbyist who had been hired by the Taiwanese government to further its interests in Washington.

Under the Foreign Agents Registration Act, lobbyists representing foreign governments are required to disclose their activities to the U.S. attorney general. According to the disclosure documents filed by Harris’s employer Alston & Bird, an Atlanta-based law firm, he wrote a draft of the resolution a month before the RNC’s 2014 summer meeting.

Once the text reached the RNC, committee members cut several phrases and paragraphs, one of which called for Taiwan’s inclusion in the Trans-Pacific Partnership, a proposed free trade agreement that has been described as a “high priority” by the Obama administration. The text that remained, however, was copied nearly word for word from Harris’s draft.

Neither the RNC nor Harris responded to questions about the resolution. Taiwan’s Economic and Cultural Representative Office in Washington, D.C. said the RNC often passes resolutions supporting Taiwan, and that the country has “a longstanding and solid friendship” with the Republican Party.

Taiwan engages in extensive lobbying of the U.S. government — not just representatives and senators but congressional staffers and even state-level officials — that receives less public attention than that of countries such as Israel and Saudi Arabia.

The island nation is viewed as a wayward province by China, and the two have been locked in a bitter standoff since the end of the Chinese civil war in 1949. Taiwan, eager to narrow China’s military edge, has long seen the acquisition of advanced U.S. weapons as a national priority. But such sales would stoke already high tensions with Beijing, a risk that has led the past three U.S. administrations to rebuff the island’s demands for newer submarines and fighter jets.

“We expect our political leaders to be independent of various interests,” Lee Drutman, a senior fellow at the New America Foundation’s political reform program, told The Intercept. “They’re supposed to weigh the claims that various interests might have, and try to evaluate them in some way. If they say, ‘You know what? We’re not going to do that. We’re just going to pick a side and let them write it for us,’ then what’s the point of having political parties as intermediaries? Why not just let lobbyists have seats in Congress?”

Both parties, Drutman said, often outsource the drafting of statements and legislations to lobbyists, in a process with very limited transparency.

With an army of lobbyists at its command in Washington, Taiwan embarked last year on a major push to sway Congress and public opinion in favor of expanding military ties between the two countries. In 2014 Taiwan had at least seven lobbying groups on its payroll, at a total cost of more than $1.39 million.

Leading the charge was former Republican Senate majority leader and 1996 GOP presidential candidate Bob Dole, who now works as a lobbyist for Alston & Bird. In the past year, Dole has personally invited a number of former Bush administration officials, including former Vice President Dick Cheney and former Secretary of State Condoleezza Rice, to speak with Taiwanese diplomats.  Leveraging his public image to Taiwan’s advantage, he wrote an op-ed that appeared in the Washington Times in January in which he called for increased arms sales to the island nation.

“Taiwan’s greatest need is new submarines. It currently has four diesel electric vessels, and these are, by military and technological standards, ancient,” Dole wrote in his Washington Times op-ed. “Our government, apparently succumbing to intimidation, has taken no further action. Nor has it agreed to enable Taiwan to buy new F-16 fighters — another glaring deficiency in the nation’s arsenal.”

Dole’s position as a paid lobbyist for Taiwan was not disclosed by the publication, although Dole did write that Taiwan “counts me among those assisting with its agenda in Washington.”

The lobbying push appears to have paid off. In 2014 Congress authorized the sale of four warships to the island and during the past year, members of Congress introduced three other bills and resolutions that stressed the importance of Taiwan’s defensive needs. Meanwhile, behind the scenes, lobbyists were busy inundating lawmakers with hundreds of emails and phone calls, urging them to support Taiwan on Capitol Hill. Several employees at one lobbying firm, the Washington-based Gephardt Government Affairs, reached out to members of Congress and their staff on at least 300 occasions between the months of February and July last year, according to Justice Department records. Gephardt Government Affairs was founded by prominent Democrat Dick Gephardt, House Majority Leader from 1989 to 1995.

Taiwan has a history of meddling with the drafting of both parties’ political platforms. In 1996, Taiwanese diplomats influenced the wording of a Democratic National Committee resolution by flying Democratic officials to Taipei and throwing lavish parties in their honor, the Wall Street Journal reported at the time.

“[Taiwan’s] current lobbying seems to focus on two major areas: sale of advanced weapons to Taiwan, and Taiwan’s participation in international organizations whose membership does not require statehood,” according to Zhiqun Zhu, a professor of political science and the director of Bucknell University’s China Institute. “Given China’s expanding power and influence, Taiwan has no choice but continue to lobby very hard to maintain the substantive relations with Washington.”

To preserve its special relationship with Capitol Hill, Taiwan often goes to great lengths, sometimes even skirting the boundaries of the law. In 2012, an investigation by ProPublica revealed that the Taiwanese government had invited then-New York Representative Bill Owens on an all-expenses-paid trip to Taipei.  The trip later sparked a probe by the Office of Congressional Ethics, which found that the Congressman’s visit had likely violated federal law.

House rules mostly prohibit lobbyists from planning congressional visits, but the State Department can waive such restrictions if the trip is organized under the Mutual Education and Cultural Exchange Act. The law lifts most disclosure requirements for trips overseas, allowing members of Congress to travel on foreign-government-sponsored trips with little oversight. Owens’s visit did not fall under MECEA, however, because his wife accompanied him, and the law prohibits spouses or family members from taking part in the program.

Lobbyists representing Taiwan often encourage lawmakers to make use of the loophole. When Gephardt Government Affairs aggressively courted Congress last year, its employees brought up the possibility of a MECEA visit 24 times, the Department of Justice documents show.

Between 2006 and 2011, more than 100 visits to Taiwan were organized under the program, the second-highest number of any country. During the same period, in a similar example of the constant, subterranean lobbying of the U.S. government generally unnoticed by U.S. citizens, the highest number of such trips — over 200 — was sponsored by Taiwan’s rival China.