Who’s keeping watch of the National Security Agency? In Congress, the answer in more and more cases is that the job is going to former lobbyists for NSA contractors and other intelligence community insiders.

A wave of recent appointments has placed intelligence industry insiders into key Congressional roles overseeing intelligence gathering. The influx of insiders is particularly alarming because lawmakers in Washington are set to take up a series of sensitive surveillance and intelligence issues this year, from reform of the Patriot Act to far-reaching “information sharing” legislation.

After the first revelations of domestic surveillance by NSA whistleblower Edward Snowden, President Obama defended the spying programs by claiming they were “subject to congressional oversight and congressional reauthorization and congressional debate.” But as Rep. Alan Grayson, D-Fla., and other members of Congress have pointed out, there is essentially a “two-tiered” system for oversight, with lawmakers and staff on specialized committees, such as the House and Senate committees on Intelligence and Homeland Security, controlling the flow of information and routinely excluding other Congress members, even those who have asked for specific information relating to pending legislation. In January, Jeffrey Shockey became the most powerful staffer on the House Intelligence Committee after Chairman Devin Nunes, R-Calif., named him staff director, the highest ranking staff assignment. Shockey has gone in and out of lobbying and congressional work for over two decades. As a staffer for Rep. Jerry Lewis, R-Calif., back in 1996, he was one of several staffers to vacation in the Northern Mariana Islands on a trip sponsored by Jack Abramoff, a lobbyist later convicted on corruption charges, who was then representing the Mariana government in a bid to downplay concerns over labor conditions on the island’s factories, which included allegations of sweatshop-like environments and forced abortions. Shockey later became a lobbyist himself, helping his military industry clients win over $150 million in earmarks from Lewis’s appropriations committee, an arrangement that led to a federal investigation. In recent years, Shockey launched his own lobbying firm, and a partnership with former General Stanley McChrystal, to represent a number of companies that work on behalf of the military and in some cases intelligence agencies like the NSA, including Academi (the firm formerly known as Blackwater), Boeing, General Dynamics, Northrop Grumman, United Launch Technologies and United Launch Alliance. Disclosures show Shockey earned over $1.2 million last year and is set to receive over $1.1 million in three installments as a payout for leaving his firm to become a public servant.

Lead House overseer of information technology worked for the CIA 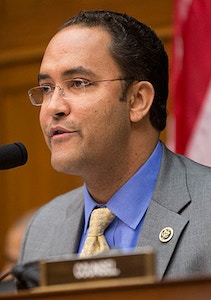 After winning an upset victory in the midterm election last year, Rep. Will Hurd, R-Tex., was appointed to become chairman of a new House Oversight Subcommittee on information technology. As Chairman Jason Chaffetz, R-Utah, explained to Roll Call, this new subcommittee will have jurisdiction over anything dealing with technology, from NSA data collection to cybersecurity. Hurd is no ordinary member of Congress. Before running for office, Hurd worked in offensive cyberoperations as a CIA officer, joined the Crumpton Group, a private intelligence firm led by a former CIA official, and later helped build a cybersecurity company called FusionX.

Last year he advised an NSA contractor, this year he is a leader of Senate Intelligence Committee staff

Sen. Richard Burr, the North Carolina Republican who chairs the Senate Select Committee on Intelligence, appointed as the committee’s Deputy Staff Director Dr. Robert Kadlec, a consultant who earned $451,000 last year advising a number of intelligence-related companies, including Invincea, a DARPA project, and Scitor, a contractor to the NSA. Another recently minted Senate Intelligence Committee staffer is Matthew Pollard, who previously worked as a lobbyist for Orbital Sciences Corporation, a company that provides “space-based military and intelligence operations,” according to filings with the Securities and Exchange Commission. Intelligence Online, a trade publication for the intelligence industry, reported that DARPA contracts with Orbital to work on round-the-clock global imagery technology. Pollard is a bipartisan staff member, meaning he serves both the majority and minority members on the committee.

The House and Senate Homeland Security Committees have also undergone staff changes. Chairman Sen. Ron Johnson, R-Wisc., promoted Jena Baker McNeill, a former senior associate to the Chertoff Group, to deputy staff director for the Senate Homeland Security Committee. The Chertoff Group is a consulting firm founded by former Homeland Security Secretary Michael Chertoff that serves the multibillion-dollar cybersecurity and intelligence industry. Former CACI International Vice President Brendan Shields became staff director of the House Homeland Security Committee in April of last year. CACI is a defense contractor that gained infamy for its management of the Abu Ghraib prison complex in Iraq. The firm, however, specializes in informational technology for the military and has participated in a number of acquisitions in recent years to break further into intelligence agency work. 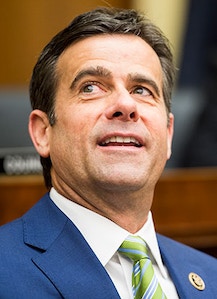 Like Rep. Hurd, Rep. John Ratcliffe, R-Tex., is another freshman lawmaker who was instantly awarded the chairmanship of a specialized committee overseeing cybersecurity and surveillance issues. Ratliffe is the chairman of the Homeland Security Subcommittee on Cybersecurity, a position overseeing new information-sharing measures decried by privacy advocates as “cybersurveillance.” Before running for Congress, Ratcliffe was a lawyer with the Ashcroft Law Firm, the company founded by former Attorney General John Ashcroft. Ratcliffe’s personal finance disclosure reveals that he represented Huntington Ingalls, a major defense contractor, as well as as well as Stratfor, a private intelligence firm that reportedly conducted work for companies including “Lockheed Martin, Northrop Grumman and Raytheon, as well as US government agencies like the Department of Homeland Security, the Defense Intelligence Agency and the Marines.”

Lobbyist influence is a particularly sensitive issue when it comes to intelligence committees, since those committees oversee secret “black budgets” in which money is disbursed with greatly reduced public oversight. The potential for self dealing is significant; former Rep. Randy “Duke” Cunningham, R-Calif., was caught accepting bribes to essentially earmark government contracts into a black budget.

But lobbyist control over the House and Senate intelligence and homeland security committees may have a profound impact on a range of surveillance issues debated by Congress this year, including the Cybersecurity Information Sharing Act and the Patriot Act.

“This is an extreme case of an industry capturing the legislative committees that oversee the industry,” says Craig Holman, a lobbying and government ethics expert at Public Citizen, an advocacy group with a strong focus on corporate accountability. “While the reverse revolving door, in which industry moves their lobbyists and executives into the government committees and agencies that regulate the industry, is disturbingly commonplace in most sectors, this sounds like the cybersecurity industry has a lock on the relevant congressional committees.”