Religious Fanaticism is a Huge Factor in Americans’ Support for Israel

A new poll from Bloomberg Politics contains a finding that, if you really think about it, is quite remarkable: Almost half of all Americans want to support Israel even if its interests diverge from the interests of their own country. Only a minority of Americans (47 percent) say that their country should pursue their own interests over supporting Israel’s when the two choices collide. It’s the ultimate violation of George Washington’s 1796 Farewell Address warning that “nothing is more essential than that permanent, inveterate antipathies against particular nations, and passionate attachments for others, should be excluded. … The nation which indulges towards another a habitual hatred or a habitual fondness is in some degree a slave.”

It is inconceivable that a substantial portion of Americans would want to support any other foreign country even where doing so was contrary to U.S. interests. Only Israel commands anything near that level of devoted, self-sacrificing fervor on the part of Americans. So it’s certainly worth asking what accounts for this bizarre aspect of American public opinion.

The answer should make everyone quite uncomfortable: it’s religious fanaticism. The U.S. media loves to mock adversary nations, especially Muslim ones, for being driven by religious extremism, but that is undeniably a major factor, arguably the most significant one, in explaining fervent support for Israel among the American populace. In reporting its poll findings, Bloomberg observed:

Religion appears to play an important role in shaping the numbers. Born-again Christians are more likely than overall poll respondents, 58 percent to 35 percent, to back Israel regardless of U.S. interests. Americans with no religious affiliation were the least likely to feel this way, at 26 percent.

The primary reason evangelical Christians in the U.S. are so devoted to Israel is simple: their radical religious dogma teaches them that God demands this. In 2004, Pat Robertson delivered a speech entitled “Why Evangelical Christians Support Israel” and said: “evangelical Christians support Israel because we believe that the words of Moses and the ancient prophets of Israel were inspired by God,” and “we believe that the emergence of a Jewish state in the land promised by God to Abraham, Isaac, and Jacob was ordained by God.” He added that “God’s chosen people” — Jews — have an obligation to God to fight against “Muslim vandals” so that Israel remains united in their hands:

If God’s chosen people turn over to Allah control of their most sacred sites-if they surrender to Muslim vandals the tombs of Rachel, of Joseph, of the Patriarchs, of the ancient prophets-if they believe their claim to the Holy Land comes only from Lord Balfour of England and the ever fickle United Nations rather than the promises of Almighty God-then in that event, Islam will have won the battle. Throughout the Muslim world the message will go forth-“Allah is greater than Jehovah.” The promises of Jehovah to the Jews are meaningless.

That is the ugly religious extremism about Israel heard over and over in America’s largest evangelical churches. The wildly popular “dispensationalist” sect is driven by the dogmatic belief that a unified Israel in the hands of the Jews is a prerequisite for Armageddon or the Rapture and the return of Jesus: a belief shared not by thousands but millions of Americans. As the evangelical Robert Nicholson put it in a nuanced and thoughtful 2013 essay examining doctrinal differences among this group: “Evangelicals believe that God chose the biblical people of Israel as His vehicle for world redemption, an earthly agent through whom He would accomplish his grand plan for history.” The popular and influential pastor John Hagee put it simply: “We support Israel because all other nations were created by an act of men, but Israel was created by an act of God!”

It goes without saying that religious belief also plays a role in the support for Israel among American Jews. Indeed, neocons frequently link American Jewishness to support for Israel by arguing that no good American Jew should be a Democrat on the ground of the party’s supposed insufficient support for Israel (even as they accuse Israel critics of “anti-Semitism” for suggesting the exact same linkage as the one they themselves exploit). As a 2013 Pew poll found:

Most American Jews feel at least some emotional attachment to Israel, and many have visited the Jewish state. Four-in-ten believe Israel was given to the Jewish people by God, a belief that is held by roughly eight-in-ten Orthodox Jews.

Jewish religious extremism is directly linked to support for Israel, as The Forward noted: “Among Jews, AIPAC’s support also seems to be strongest among Orthodox Jews.” The New York Times recently reported the link between Jewish activism and Israel support: “Republicans … are more fervently pro-Israel than ever” partially due to “a surge in donations” from what J Street calls “a small group of very wealthy Jewish-Americans” such as Sheldon Adelson. 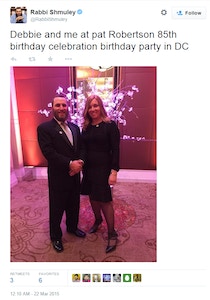 But Jews compose only 1.4 percent of the American population, which still serves as a limit on that factor. (By contrast, 82 percent of Americans identify as Christian and “Thirty-seven percent of all Christians describe themselves as born-again or evangelical”). Moreover, American Jews have long been divided on the importance of Israel to their political perspective, and there is erosion of this support particularly among younger American Jews. Indeed, evangelical Christians are far more steadfast in their support for Israel than American Jews, as Bloomberg found: “For many Democrats, even Jewish ones, the issue doesn’t have the same purchase.” The religious-driven support of evangelicals — and the cynical alliance between the two religious factions — is crucial for sustaining this support.

It’s important not to oversimplify the role religious fanaticism plays. There are, to be sure, other factors accounting for this bizarre American support for Israel even when it’s at the expense of their own country. Sustained antipathy toward Muslims in the post-9/11 era has been effectively exploited to generate this support. Americans have been taught for decades to view Israel as a “democracy” — an increasingly unsustainable proposition — and thus a natural political ally. Americans tend not to question or even debate policies that command bipartisan support, and unstinting devotion to Israel has been the ultimate bipartisan viewpoint for years. And, as David Mizner recently argued in Jacobin, Israel has long been a useful “proxy state” for the U.S. government’s desire to dominate the Middle East.

But there is no denying that religious extremism plays a very significant role in American attitudes toward Israel. Given its importance, this is a remarkably under-discussed phenomenon, mostly because American media figures are very comfortable maligning other countries as being driven by religious fanaticism while ignoring how much their own country is. To underscore how rarely this issue is discussed, consider that NPR’s political reporter Domenico Montanaro seemed shocked that support for Israel provoked wild crowd support during Ted Cruz’s presidential announcement speech to Liberty University:

As Dave Weigel asked after seeing that tweet, how can someone who covers politics for a living find this surprising? It’s because this phenomenon is so rarely discussed. It’s fun, easy and self-satisfying to think of the countries we dislike as being plagued and shaped in their foreign affairs by religious fanaticism. It’s much less fun and comforting to think of ourselves that way. But there’s no question that religious extremism is prevalent among Americans, and the pervasive and bizarrely absolute support for Israel is driven in significant part by extremist religious dogma about God’s will.