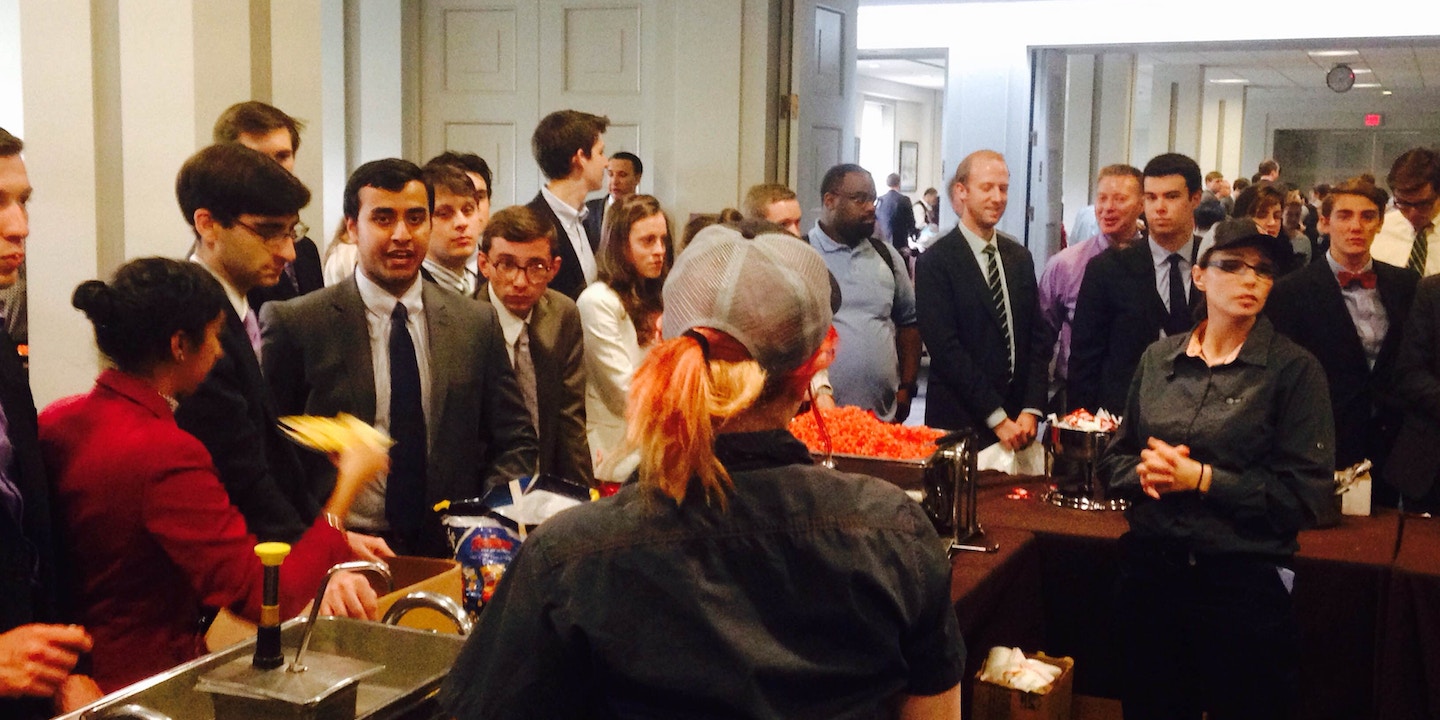 Taco Bell franchise owners are lobbying Congress to help prevent their workers from organizing a union or qualifying for employer-based healthcare. They’re also asking for assistance with real estate tax credits and other issues on their legislative agenda.

On Tuesday afternoon, to thank congressional staffers for all they do on behalf of the fast food industry, franchisees hosted their annual reception at the Rayburn Office Building on Capitol Hill, a free food giveway in which staffers and interns gorged themselves on unlimited free Taco Bell tacos and nachos.

Workers at the event, which packed two rooms, said they gave away some 6,000 tacos in all.

FRANMAC, the Taco Bell Franchise Management Advisory Council, like many industry groups, hosts an annual fly-in to help business owners press their case face to face with lawmakers and their staff. But as Taco Bell continues to flex its political muscle on Capitol Hill, the restaurant group has become beloved for its very special way of expressing its appreciation.

To franchisers, the spectacle of hundreds of staffers converging to grab boxes of free Taco Bell is also a fun way to cap off a long day of meetings. Earlier on Tuesday,  they met for a briefing from freshman Sen. Cory Gardner, R-Col., then split off to meet their local legislators.

The Taco Bell lobbyists who organized the event would not talk to media, but the franchisees who they brought along to help press their case were happy to chat.

“It’s been going on for quite a few years now, it is infamous. Everybody looks forward to it from year to year. It’s a free for all,” said Joye Smith, a franchisee from Northern California. “This is how we want to say thank you for all that you do for us,” she added, noting that some congressional staffers bring boxes down to haul more tacos back to the office.

“We love our food and we’re glad to see our staffers love the food as well,” said Rich Lepping, a Madison, Wiconsin-area franchise store owner.

Louis Brown, a franchisee from San Diego, said that congressional staffers would ask him about the reception during his meetings with them. “Every office we went to, they knew about this. Everybody,” he chuckled.

Smith and Brown said they spoke to Rep. Jeff Denham, R-Calif., about the definition of a full-time employee under the Affordable Care Act, a rule that mandates employer-sponsored healthcare for workplaces with over 50 employees.

Several other franchise owners said they also discussed tax legislation to depreciate the construction and remodeling costs of restaurant facilities, and a ruling from the National Labor Relations Board.

“We’ve got some concern with the NLRB, with the unionization and the joint employer rule,” said Lepping.

Last year, the NLRB issued complaints against McDonald’s as a “joint employer” of both franchisees and workers, a determination that will make the parent company liable for labor violations by franchise owners. The move could pave the way for labor unions to begin organizing fast food restaurants.

YUM Brands, the franchiser of Taco Bell, like much of the fast food industry, has ramped up lobbying to defeat the joint employer ruling. Meanwhile, Republican leaders in Congress have pushed to use a fairly obscure procedure called the Congressional Review Act to strike down the ruling.

The Taco Bell lobby has had success with this Congress. Earlier this year, the House of Representatives passed a bill to change the cutoff for defining a full-time employee under the new health care law from 30 to 40 hours, a change that would relieve many franchisees from having to provide health insurance to their workers. Republican leaders have blocked attempts to raise the federal minimum wage, which stands at $7.25 an hour. Lobbyists often gain access to staffers through perks and gifts ranging from international junkets to receptions like FRANMAC’s. The Motion Picture Association of America, for instance, invites staffers to special preview screenings of new Hollywood films before they hit theaters. Comcast and Delta reportedly provide VIP services for lawmakers to call for expedited service.