The Key War on Terror Propaganda Tool: Only Western Victims Are Acknowledged

It shouldn’t take the drone-killing of a U.S. citizen to cause a mainstream discussion of how reckless these killings are. But it does. That, by itself, should cause a serious examination of the mindset behind all of this.

In all the years I’ve been writing about Obama’s drone killings, yesterday featured by far the most widespread critical discussion in U.S. establishment journalism circles. This long-suppressed but crucial fact about drones was actually trumpeted as the lead headline on the front page of The New York Times yesterday: 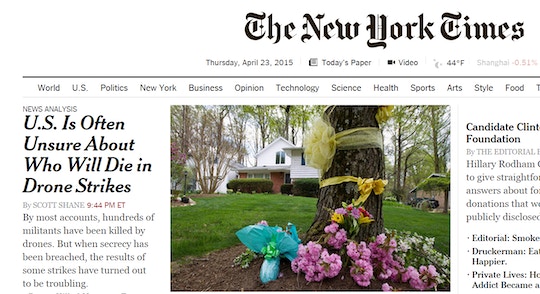 The reason for the unusually intense, largely critical coverage of drone killings yesterday is obvious: the victims of this strike were Western and non-Muslim, and therefore were seen as actually human.

Pakistani lawyer Shahzad Akbar, who represents 150 victims of American drones and was twice denied entry to the U.S. to speak about them, told my Intercept colleague Ryan Devereaux how two of his child clients would likely react to Obama’s “apology” yesterday:

“Today, if Nabila or Zubair or many of the civilian victims, if they are watching on TV the president being so remorseful over the killing of a Westerner, what message is that taking?” The answer, he argued, is “that you do not matter, you are children of a lesser God, and I’m only going to mourn if a Westerner is killed.”

The British-Yemeni journalist Abubakr Al-Shamahi put it succinctly: “It makes me angry that non-Western civilian victims of drone strikes are not given the same recognition by the US administration.” The independent journalist Naheed Mustafa said she was “hugely irritated by the ‘drone strikes have killed good Westerners so now we know there are issues with drones’ stories.” The Washington Post’s Eugene Robinson this morning observed: “It is all too easy to ignore … the dubious morality of the whole enterprise — until the unfortunate victims happen to be Westerners. Only then does ‘collateral damage’ become big news and an occasion for public sorrow.”

When there is an attack by a Muslim on Westerners in Paris, Sydney, Ottawa, Fort Hood or Boston, we are deluged with grief-inducing accounts of the victims. We learn their names and their extinguished life aspirations, see their pictures, hear from their grieving relatives, watch ceremonies honoring their lives and mourning their deaths, launch campaigns to memorialize them. Our side’s victims aren’t just humanized by our media, but are publicly grieved as martyrs.

I happened to be in Canada the week of the shooting at the Parliament in Ottawa, as well as a random attack on two Canadian soldiers days earlier in a parking lot in Southern Quebec, and there was non-stop media coverage of the victims, their families, their lives:

Thousands of mourners packed a church and lined adjacent streets in industrial Hamilton, Ontario, on Tuesday for the funeral of the soldier shot dead in last week’s attack on the nation’s seat of government. … Canadian Prime Minister Stephen Harper told mourners at the church that [Corporal Nathan] Cirillo had inspired and united Canadians. He choked back tears in a rare public display of emotion when addressing Cirillo’s five-year-old son. But as I noted in a speech I gave in Ottawa two days after the Parliament shooting, the victims of Canada’s own violence — in Afghanistan and Iraq — and of its sustained cooperation in the U.S. War on Terror campaign, are completely ignored. While all of Canada knew the name of Corporal Nathan Cirillo, only the most minute fraction of Canadians could name even a single one of the many innocent victims killed by their own government and military. They simply don’t exist.

This is the toxic tribalism that repeats itself over and over throughout the West. Western victims are mourned and humanized, while victims of Western violence are invisible and thus dehumanized. Aside from being repugnant in its own right, this formula, by design, is deeply deceptive as propaganda: It creates the impression among Western populations that we are the victims but not the perpetrators of heinous violence, that terrorism is something done to us but that we never commit ourselves, that “primitive, radical and inhumanely violent” describes the enemy tribe but not our own. (It’s the same tactic that explains why we hear so much about American journalists imprisoned in adversary nations such as Iran and North Korea, but almost nothing about Muslim journalists imprisoned for years without charges by the U.S. government, thus deliberately creating the false impression that only those Bad Countries, but not us, do this.)

To see how systematically the U.S. dehumanizes foreign Muslims, just think about that above-posted New York Times drone headline. The full headline is even more descriptive: This “uncomfortable truth” has been obvious for so long. So often, the U.S. government shoots missiles at buildings, cars and homes outside of “battlefields” without having any idea who it will kill. Despite this fact — that not even the government itself knows who it is killing — the U.S. media routinely and reflexively describes victims of U.S. drone strikes as “militants.” Democrats and progressives, who to their eternal disgrace overwhelmingly support Obama’s drone killing program, will declare “we are killing The Terrorists!” to justify all of this even though the Obama administration itself, let alone these cheering progressives, have no idea who their government just killed.

How can people killed by the U.S. government regularly be described as “militants” or “terrorists” when nobody has any idea who they are? Part of it is classic authoritarianism: My government says the people they are killing are Terrorists, so therefore, they are Terrorists.

But the deeper, more troubling answer is equally clear: Foreign Muslims are so dehumanized, so invisible, that they are just equated with Evil Threats even when nothing is known about them. Indeed, Obama officially re-defined the term “combatant” to mean “all military-age males in a strike zone.” In other words, as The New York Times reported in 2011, all males between 18 and (roughly) 54 killed by U.S. drones are presumed to be combatants — terrorists — “unless there is explicit intelligence posthumously proving them innocent.” That mentality is the ultimate in dehumanization.

There are so many heinous stories of U.S. drones blowing up children and innocent adults. Obama used cruise missiles and cluster bombs to kill 14 children and 21 women in a Yemeni village (weeks after winning the Nobel Peace Prize), while a 2012 drone strike attacked a Yemeni wedding convoy and “killed 12 passengers in the vehicle, including three children and a pregnant woman.” Except for those who watch shows like Democracy Now or certain Al Jazeera shows, virtually no Americans ever learn the name of any of those victims, or even hear that they exist at all.

It shouldn’t take the drone-killing of an American citizen to enable a mainstream discussion of how much deceit and recklessness drives these killings. But it does. And that fact, by itself, should cause a serious examination of the mindset behind all of this.