Life and Death of an Al Qaeda Spokesman

A spokesman for Al Qaeda in the Arabian Peninsula was recently killed in a U.S. drone strike. A former journalist and dedicated jihadist, Muhannad Ghallab offered a rare window into a demonized group. 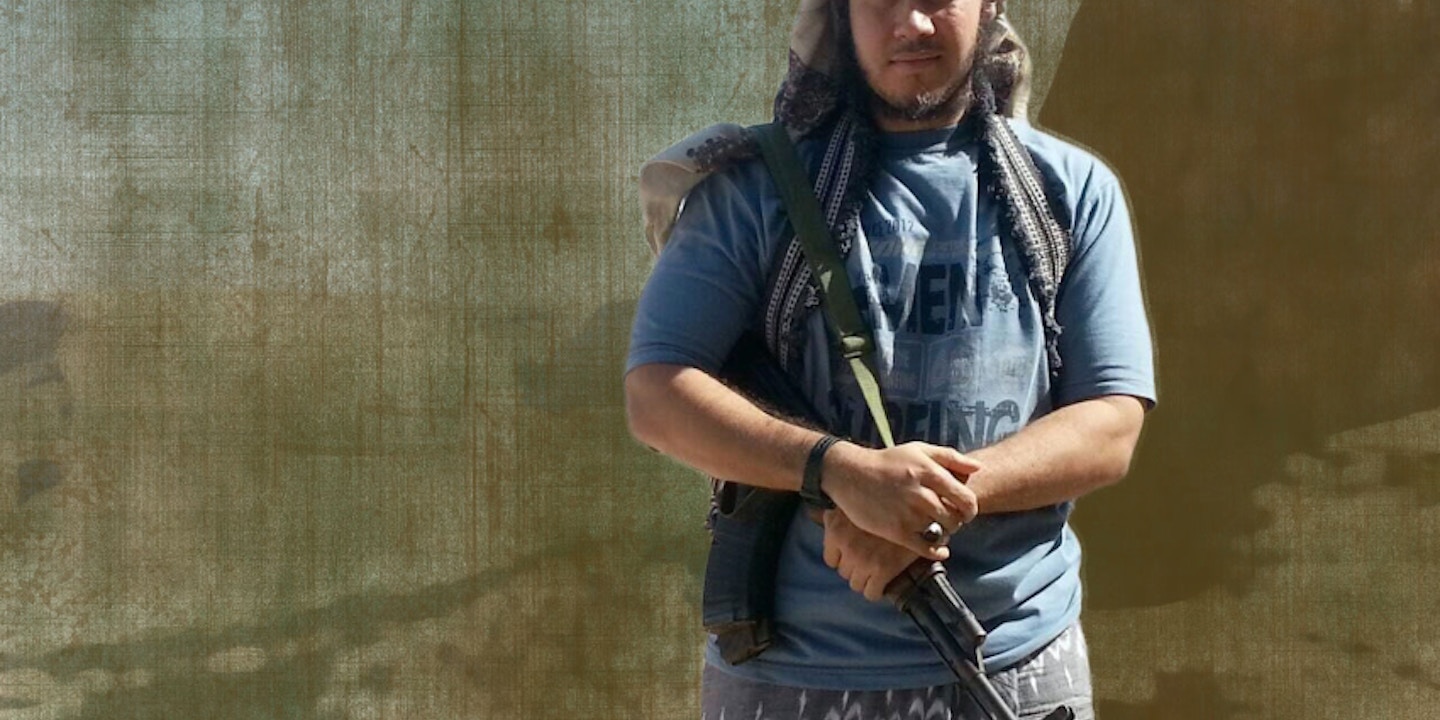 The voice on the phone was a mere whisper. The spokesman for al-Qaeda’s most notorious affiliate, AQAP, sounded nervous.

The man who scores of reporters around the world came to know over the last year under the alias of “Muhannad Ghallab” was not what I expected. One of the pictures he sent me showed him with long hair, dressed in a blue T-shirt with the words “Men gone surfing” printed across it.

Muhannad first contacted me in 2012 when I was living in Yemen’s capital, Sanaa, working as a freelance journalist. I became, as he later joked, his personal “experiment” as AQAP’s initial attempt to reach out to the international media, putting up an English-speaking voice to counter the Washington and Western media narrative. Eventually, Muhannad would be quoted widely in international media outlets — usually just as a nameless spokesman — providing a rare insight into AQAP.

Muhannad told me he had once worked as a journalist for one of the region’s “leading news agencies” after graduating in media studies from college. The 35-year-old Egyptian’s path to Yemen had started in the immediate aftermath of 9/11, when the United States invaded Afghanistan. “I saw good Muslim youth making sacrifices for the sake of Islam while I cared about myself only,” he told me. “I started to reflect on what America was doing. I started to pray and read Quran … I let my beard grow. I looked Islamic. I felt Islamic.”

He said he was later arrested, tortured and jailed for three years for planning to travel to Iraq to fight against the U.S. invasion. (A eulogy posted online by a colleague from AQAP said the arrest happened in 2005, just three months after his marriage. Muhannad was “swallowed into the prisons of the tyrants for nearly three years,” reads the eulogy.)

In 2011, during the political uprising in Cairo’s Tahrir Square, Muhannad mixed with local and foreign journalists. He wanted to teach Egyptians about about Sharia law and jihad, but the uprising failed to bring about the changes he sought. He left that year for Yemen to join AQAP.

Muhannad was willing to talk about any issue, from the killings of fellow Muslims in Yemen to the Charlie Hebdo attacks in Paris. The debates, via encrypted online communications, regularly lasted six hours or more in between Sanaa’s frequent electricity outages and prayer times. He trumpeted the Boston bombings and the Charlie Hebdo killings, yet sent messages of sympathy following the death of journalist Luke Somers, who was killed last December during a failed rescue attempt by U.S. special operations forces.

Somers had been kidnapped by AQAP, but Muhannad said the group never had any intention of killing Somers: Hostage-taking was a business, not a killing program. But after American special operations forces killed seven AQAP fighters in a previous failed rescue attempt in November, he said he felt no responsibility for Somer’s death (the U.S. government claimed AQAP killed Somers during the raid; AQAP claimed he was killed in the crossfire).

Muhannad pursued Western journalists, including many American reporters, reaching out on social media and email, eventually building a wide network of contacts. He tried to humanize AQAP for Western journalists. He was a genuine believer in jihad, but didn’t want AQAP’s actions equated with terrorism. AQAP was conducting a holy war in response to America’s military aggression. Attacking the United States, he insisted, was intended “to make the American people wake up to what their government is doing.”

We would often spend hours online chatting about politics, war, the media, religion, his children (who lived in Yemen, along with his wife), and even his nostalgia for 1990s British pop bands such as Take That and East 17. His views often combined his belief in Sharia law with a more progressive mindset (women should be covered, he insisted, but he also thought women should be allowed to work and be educated).

He also distanced himself and AQAP from the Islamic State, which he described as a group “no real Muslim would join … they’re crazy.” He viewed their brutal tactics against women and the use of beheadings as incompatible with his and al-Qaeda’s interpretation of Islam and jihad. The declaration of a Caliph was illegitimate and laughable, he said.

Yet ISIS was proving more adept than AQAP at propaganda. Unlike ISIS, with its influx of foreign fighters, including many from the West, AQAP had been slow to make its presence felt on social media and in its online propaganda. The group’s English-language Inspire magazine led the way in al-Qaeda propaganda for the English-speaking world when it was launched in 2010. But there had been little else, until Muhanned launched his own campaign to reach out to Western media, resulting in AQAP’s first “remote international press conference” with senior leader Nasser al-Ansi.

He also gave AQAP a voice, literally, in Western media. In addition to quoting anonymous Western officials, media outlets, including The Intercept, began to include an anonymous AQAP source. In essence, Muhannad was playing the same game as officials in Washington, but it came with risk and criticism. On January 15, 2015, FBI Director James B. Comey lashed out at The New York Times for anonymously quoting AQAP. Comey criticized The Times, saying in a letter: “I fear you have lost your way and urge you to reconsider allowing your newspaper to be used by those who have murdered so many and work every day to murder more.”

Days after the FBI rebuke, Muhannad had his first near miss with a U.S. drone in a strike that killed AQAP ideologue Harith al-Nadhiri on January 31. Like with other drone strikes, it’s possible that his location had been compromised by someone within AQAP. But another possible scenario is that a data trail from his communications with Western journalists gave away his geolocation. “Terrorists do not make good cryptographers,” says Matthew Green, a cryptography expert at Johns Hopkins University.

The Intercept shared with Green some of the communication apps Muhannad asked journalists to use to communicate with him. Green says it is entirely possible the CIA or NSA used those apps to track him. The apps Muhannad used do not “provide protection against tracking,” Green says.

Around 1 a.m. local time on April 22, Muhannad was among six men killed when a missile, apparently fired from a U.S. drone, hit the tree-lined Corniche in the port city of Mukalla, which had been seized by al-Qaeda militants and local tribesmen. As usual after a drone strike, I messaged him, but this time there was no response. By morning I saw the first Tweets mentioning his latest Twitter handle, @bkagn1, and that he had been “martyred.”

After sunrise on Wednesday, a few hours after the strike, local journalists came to take pictures of the scene. All that remained was pools of drying blood, a shattered concrete wall, and what appeared to be the remnants of a missile protruding from a crater in the ground.

From a lover of American culture and a self-described “liberal” Muslim who never prayed, his voyage to becoming AQAP’s international voice concluded more than 13 years later on the edge of a gray sandy beach, the sea-front of Mukalla. Tweets from his friend after his death revealed for the first time his AQAP given name: Abu Hafs al-Misri.

On Twitter, his friends filled in additional details about his life and biography, like the death of his mother when he was 11 years old. Some journalists lamented on social media the loss of a great source last week.  But perhaps the real loss is a window — however small — into a way of thinking not as far removed from our own as many would have us believe.

Three days before his death, Muhannad began a series of online posts about one of his favorite subjects: the double standards and poor sourcing of Western media reporting on Yemen. “When US drones burn Muslim women & children in Pakistan and Yemen by its hellfire missiles,” he wrote in one message, “Western media gives a deaf ear because those whom were killed have been dehumanized a long time ago.”

One of the last conversations I had with him was about the recent wave of strikes that had killed AQAP’s front men who regularly appeared in their propaganda videos.

At the end, he added, “Inshallah” and a smiley.

– Photo of Muhannad Ghallab courtesy Iona Craig. The Intercept has blurred the background.