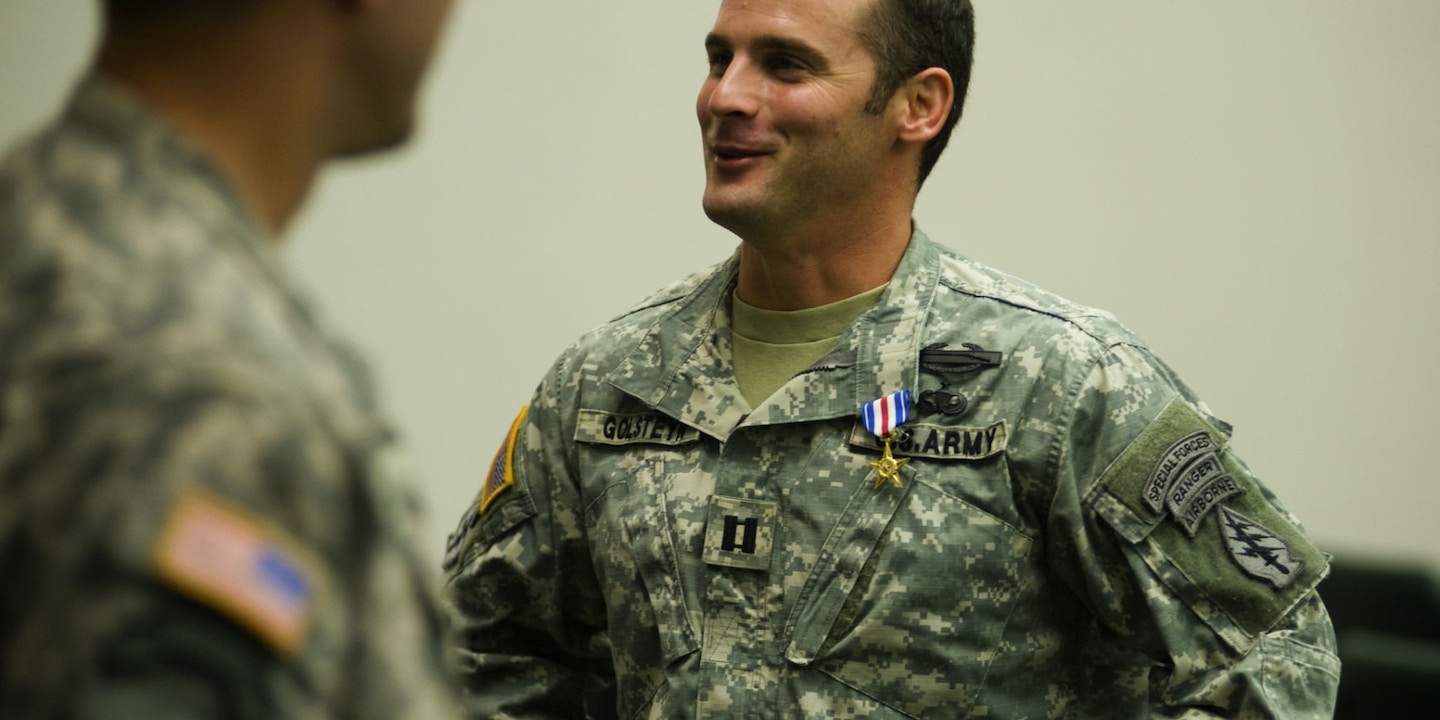 On September 14, 2011, the CIA sent an alarming message to the Pentagon: a decorated U.S. special operations commando admitted during a job interview with the agency to hunting down and killing “an unknown, unarmed” Afghan man.

The claim triggered an investigation that spanned years and saw U.S. Army Major Mathew L. Golsteyn stripped of his Silver Star. While the admission has been reported in the press, the Army’s investigation into the alleged killing has been largely conducted in secrecy.

The Intercept has obtained internal U.S. Army documents that detail elements of the military’s investigation into the alleged killing and a previously undisclosed letter of reprimand Golsteyn received last year.

“In an interview conducted at the CIA, then-CPT Golsteyn claimed to have captured and shot and buried a suspected IED bomb maker,” an Army memo dated September 29, 2014 reads. “He further went to comment that he went back out with two others to cremate the body and dispose of the remains. In the transcript, CPT Golsteyn stated that he knew it was illegal but was not remorseful as he had solid intelligence and his actions protected the safety of his fellow teammates.”

Following the September 2011 CIA interview, the agency alerted the military of a “possible violation of criminal law.” In October, the Army launched a criminal probe. The next month, Golsteyn was promoted to the rank of major.

Two years later, in November 2013, U.S. Army criminal investigators concluded that Golsteyn had knowingly violated the laws of war, alleging he had committed the crimes of “murder and conspiracy.” Army Secretary John McHugh stripped Golsteyn of his Silver Star and other awards. However, Golsteyn remains in the military and no criminal charges have been filed against him. Golsteyn received the Silver Star in 2011 for his role in a mission to hunt down enemy snipers in Afghanistan. Golsteyn’s lawyer, Phillip Stackhouse, says the Army document describing his client’s comments “contains incorrect information in several important and significant areas.” In an email to The Intercept, Stackhouse wrote, “What is true – is that during the investigation that lasted over two years, there was not one piece of evidence that corroborated the allegation.” He denounced the stripping of Golsteyn’s medals and charged that “Secretary McHugh’s actions were vindictive.”

Military law experts interviewed by The Intercept said that the confession alone was not enough to criminally prosecute him, so Army officials took the only route available to them — an administrative reprimand — to punish him.

Retired U.S. Army Lt. Col. Jeffrey Addicott, the former senior legal advisor for U.S. Army Special Forces, says the “Army acted correctly” in the case. The Geneva Conventions and corresponding Army regulations “require that whenever we receive information about a grave breach of the law of war we must investigate and take appropriate action,” wrote Addicott in an email to The Intercept. “The admission by the Captain that he had killed an unarmed unlawful enemy combatant in his custody (the 2001 AUMF would classify the person killed as such) and buried the body required further investigation.” Addicott, who currently runs the Center for Terrorism Law at St. Mary’s University in Texas, says the military would need “additional evidence” to obtain a conviction under the Uniform Code of Military Justice.

“Someone could look at this and say, ‘My God, this is a slap on the wrist for a heinous, unjustified killing,’” says Professor Geoffrey Corn, an international and war law expert at the University of South Texas. “If I had been the JAG officer they came to, it would kill me not to be able to charge this guy.”

Corn, who spent 22 years as a military officer and served as the Army’s senior law of war expert in the Office of the Judge Advocate General,  says that in order to criminally charge Golsteyn with murder, prosecutors would have to find corroborating evidence, such as a witness, a body, physical evidence or a co-conspirator. “The fact is that he admits to what — if it’s true — is as serious of a felony as we can imagine: intentional, unlawful killing of a human being, which is premeditated murder,” Corn told The Intercept. “If there was a viable criminal sanction, you’d have to do a general court martial. You’d have to. Nothing else would be credible. And you can’t because you can’t find corroboration for the confession.”

Golsteyn would have known the CIA would eventually polygraph him during his application to work with the CIA, according to Corn. “The odds that he’s gonna lie in that interview are pretty slim. So the context of the statement makes it highly credible,” he said. “Maybe he didn’t do it. Or maybe he killed somebody in a fight and he’s trying to embellish it to make it seem like he’s more hardcore than he is. I don’t know. The problem is all of that is speculative.”

Maj. Golsteyn was reprimanded for the alleged murder by Army Brigadier General Darsie D. Rogers in a letter dated April 24, 2014, also obtained by The Intercept.

“On 6 September 2011, during an interview with the Central Intelligence Agency, you admitted to committing a Law of Armed Conflict violation,” the letter begins. “You are hereby reprimanded. Your behavior in this matter manifests a complete lack of judgment and responsibility.”

The letter explains that the “reprimand is administrative in nature and is not imposed as punishment under the” Uniform Code of Military Justice.

“It’s a career ending administrative sanction for an officer. The stripping of the medals is peripheral. The real thing is once he gets this reprimand in his official file, then somebody’s going to say we should process him to be separated from the military—in other words, fire him,” says Corn. “The burden of proof is different for an administrative sanction than it is for a criminal sanction. That’s the law. You don’t need corroborating evidence.”

California Rep. Duncan Hunter, a member of the House Armed Services Committee, has publicly declared his support for the embattled soldier. Writing on Golsteyn’s case in an article for The Daily Beast in February, the Republican lawmaker, himself an Iraq and Afghanistan war veteran, lamented that, “The career of a decorated soldier and everything he has accomplished over a nearly fifteen-year service career has been taken away. The reason: an allegation that the Army was never able to substantiate.”

Speaking to The Intercept Wednesday, Hunter’s spokesman, Joe Kasper, argued that relying solely on the information contained in the Army’s documents could present a “one sided” view of the Golsteyn case. In the absence of a transcript, the context of the conversation Golsteyn had with the CIA remains unclear, he said, adding that the Army has failed to present evidence linking Golsteyn to any wrongdoing.

“The process has to have integrity,” Kasper said. “There has to be due process.”

This is not the first time soldiers with the Army’s 3rd Special Forces Group have been suspected of unlawfully killing Afghans and disposing of their bodies. In November 2013, Rolling Stone magazine presented evidence linking a unit with the special forces group to the disappearance — and suspected killing — of 10 Afghan civilians.

Golsteyn’s hearing to determine whether he will receive a less than honorable discharge from the Army is scheduled for May 18.