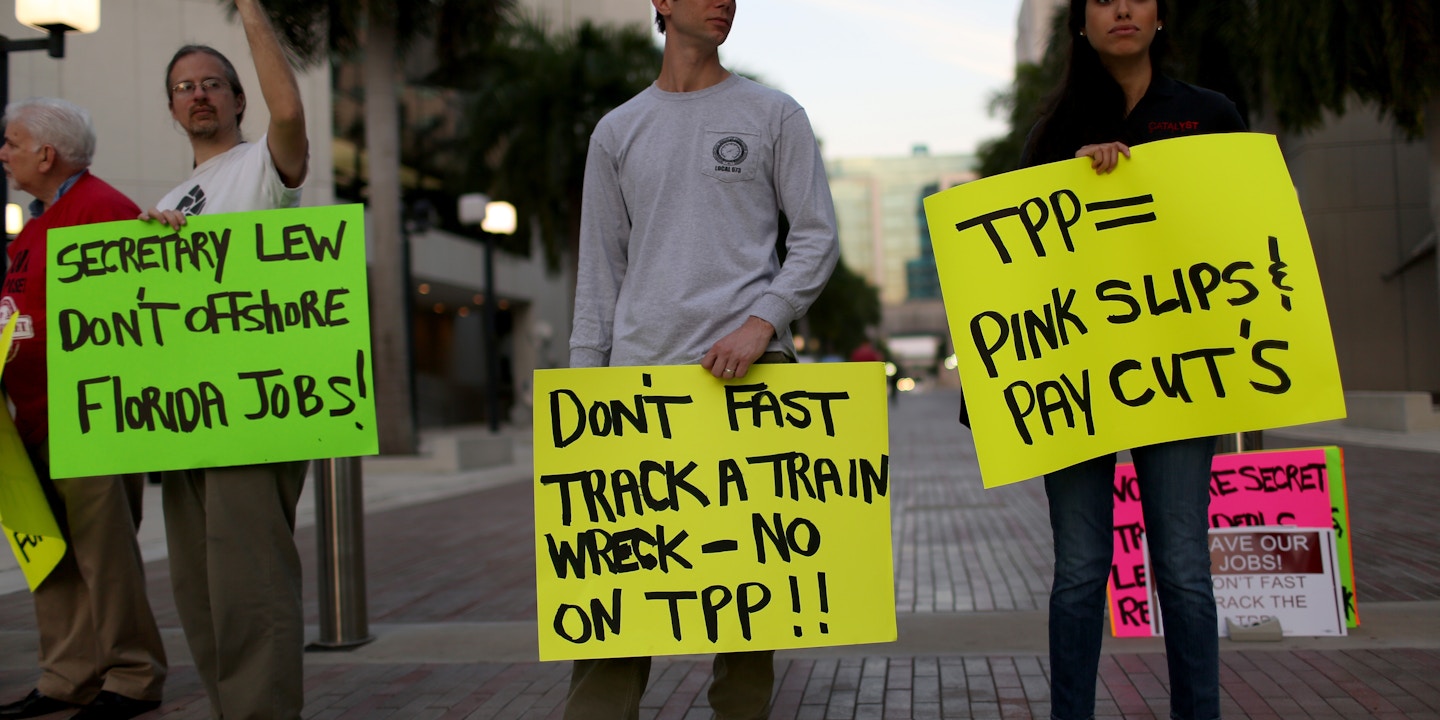 While Democratic presidential candidate Hillary Clinton is refusing to reveal her position on the massive Trans-Pacific Partnership trade agreement, other former State Department officials are actively supporting the agreement. They’re just not bothering to reveal their conflicts of interest.

More than 30 former State Department officials, envoys, military officers and White House national security advisers who served under both Republican and Democratic presidents signed a letter last month calling the trade agreement “a defining test for American political and economic leadership in the Asia-Pacific region” and urging members of Congress to give President Obama “fast-track” authority to speed its passage.

Though the officials identified themselves in the letter using their prior government titles, many have since passed through the revolving door and now work at consulting firms focused on helping multinationals with interests in East Asia. Six of those with non-disclosed involvement in ventures that focus heavily on Pacific Rim trade served under Secretary Clinton.

The congressional letter was organized, in part, by Kurt Campbell, a former top aide to Clinton. Campbell served from 2009 until 2013 as assistant secretary of state for East Asian and Pacific Affairs. Metadata from the letter identifies the author of the document as Yong Kwon, an analyst with the Asia Group, a consulting firm founded by Campbell within days of leaving the State Department in February 2013.

Nirav Patel, the COO of the Asia Group and a former deputy assistant secretary of state in the Bureau of East Asian and Pacific Affairs under Clinton, also signed the letter.

In response to a request for comment about the letter, former Ambassador Tom Schieffer said via email that  “none of my clients has taken a position on the TPP.”

Frank Lavin, a signatory to the letter and former undersecretary of commerce for international trade during President George W. Bush’s second term, said Campbell helped organize the lobby effort. Asked why the officials signed the letter with their former government titles alone, and not their current titles, Lavin said, “the letter was a communication on behalf of former government officials, so we should not find it surprising that we were all identified according to our past government position.” Lavin is the CEO and founder of Export Now, a firm that bills itself as “the only complete solution for selling online in China, the world’s largest e-commerce market.”

“There were two letters, one for Asia hands and organized by Kurt Campbell, and one for former Commerce Department people, organized by Chris Padilla,” Lavin said. Padilla, now a chief IBM lobbyist, succeeded Lavin as Bush’s final undersecretary of commerce for international trade.

Asked about the letter, Rep. Alan Grayson, D-Fla., said he was disappointed to see former government advisers failing to disclose that “they’re on the take.”

Other TPP critics say that the letter is indicative of a recurring problem. “I guess the main thing that jumps out of me — it’s really kind of the norm. I’m not saying that’s good,” said Center for Economic and Policy Research co-director Dean Baker. He said he’s seen pro-TPP opinion columns that fail disclose similar conflicts of interest.

On Friday, the U.S. Senate passed trade promotion authority, the “fast-track” bill Obama requested to make passage of the actual agreement easier. After the vote, Speaker of the House John Boehner, R-Ohio, said that the House “will take up this measure,” but did not specify when.

Despite calls by Sens. Bernie Sanders, I-Vt., and Elizabeth Warren, D-Mass., to oppose the agreement, Clinton has not taken a definitive position on the accord.

View the letter below: