“You’re Not Meeting the Candidates Now, They’re All Going Out to Meet Sheldon Adelson”

Rep. John Sarbanes explains how his campaign finance bill would incentivize politicians to talk to regular people, not just the rich and the powerful. 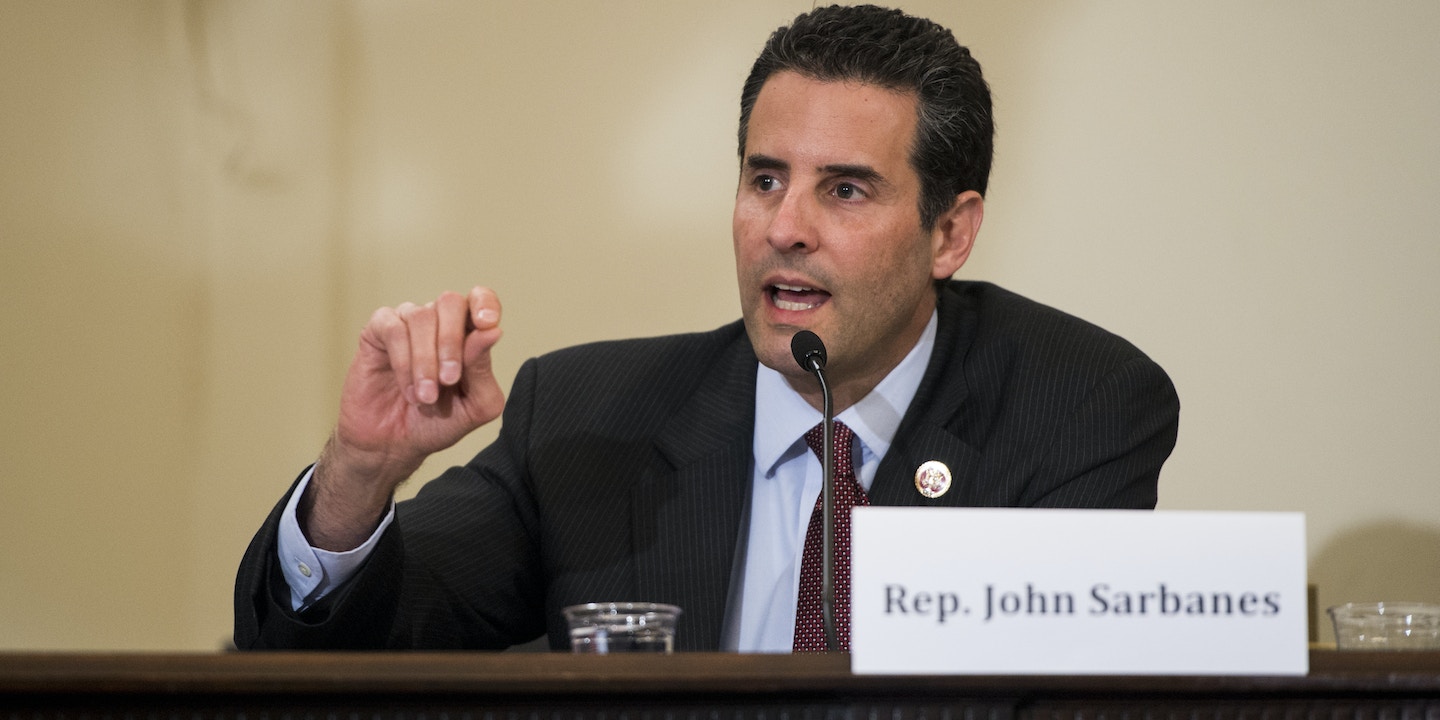 I recently spoke with Rep. John Sarbanes (D-Md.) at length about the Government by the People Act, his campaign finance reform bill, and why it’s so different from the standard news about money and politics that makes most people dissolve into a small puddle of despair — see Wednesday’s post about that here. The bill has 160 co-sponsors in the House of Representatives and there are 20 co-sponsors for a companion bill in the Senate.

In the first part of the interview,  Sarbanes explains the rationale for his bill, how it would change politicians’ behavior, and how similar systems are already having an impact on a state and local level. In part two, coming Friday, Sarbanes describes how he markets this idea, why it could not just change campaign financing but plausibly diminish the impact of big-money lobbying, and how it would keep incumbents like himself on their toes.

So why do we need your idea for campaign finance reform?

SARBANES: Most people are sitting there in their kitchens, and they’re watching cable television, and it seems like every day there’s more news about big money, Super PACs, multi-billion dollar presidential campaigns. And the average person is looking at that and saying, “This is crazy, where do I fit into this? How do I possibly have any kind of role to play or any voice that could match what those other players have?”

And that’s where we come along and say: “Well, actually here’s a system that can give you some power, that can make you a player.” And I think if you offer that to people, they’ll say, “Okay, I don’t have to just be a spectator in my own democracy anymore. I can actually go on the field and play the game.” I think this is a very hopeful message.

There’s some great research that’s been done on this in New York City [which instituted a 6 to 1 match for small donations in 2007]. There were whole neighborhoods, before they put their multiple matching system in place at the municipal level, that never gave any money — because no candidate ever showed up asking for a donation. They completely ignored those neighborhoods, because they said, I can’t collect $500 donations there, or $1000 donations, or even $200 donations. So they never set foot over there, they never did the outreach.

Since they put that system in place, it’s completely changed that dynamic. And you’re seeing events and gatherings and outreach on the part of candidates in some of these neighborhoods that were completely ignored before — because it’s worthwhile for those candidates to go find those citizens.

The problem we have now is that if you can give $25 or $50, that may be a heavy lift for you but it’s still not a big enough lift for the candidate to want to come and find you. Right now to make it worth it for a member to attend a fundraising event, they need to come back with $10,000, at least. And on K Street [i.e., at a fundraising event in Washington, D.C. with lobbyists] you know you can walk out of the room with that.

There’s no way a house party with 30 people can compete. They each give $25, and that’s $750. But the cost now is about $1.6 million for a congressional campaign. So you have to go to the thing on K Street to get money.

And not just that: none of the people at the K Street event can vote for you [i.e., they don’t live in your district]. The 30 people at the house party, they can do all of it: they can vote, they can donate, they can volunteer, they can rope their friends in. You’re creating an active, engaged group of people around your campaign. That can be worth 2 to 3 points, that’s the difference in a close election.

It’s like with that Verizon ad: “Can you hear me now?” Right now candidates can only hear the $1000 donor, the PAC donor. But if you have those people sitting in that living room with that match, all of a sudden you can hear them. All of a sudden on that Verizon map showing the signal only coming from Potomac, Maryland and Marin County in California and Manhattan and so forth, they’re coming from all these other parts of the country that used to be completely dark, which is where most Americans live.

And what it means is that power shifts again — or maybe for the first time — to everyday citizens when it comes to the funding of campaigns. And where that kind of power resides, there’s influence, but it’s influence that’s coming from the broad public, not coming from special interests.

Are all 150 of your bill’s co-sponsors Democrats?

The huge lion’s share of that is Democrats, but we think we can begin to build support from the other end of the political spectrum. We have one Republican co-sponsor, Walter Jones of North Carolina, who’s very passionate about this issue.

We’re finding that the sentiment of feeling left out, of your voice not being heard, you can find that on either end of the political spectrum. In fact, if you look at the Tea Party movement on the right, and Occupy Wall Street on the left, they both come from the same place: a feeling on the part of the average person that there’s some powerful elite in Washington and New York that is running the country, and that everybody else is getting left behind. I think there’s real potential to create a political coalition that cuts across the political spectrum — where you could have people saying, well, you and I don’t agree on just about anything when it comes to substantive policy, but we can agree that as a matter of democratic process that our voices should be heard.

Are you familiar with John Pudner? Pudner was one of the strategists for David Brat [a Tea Party candidate who beat then-Majority Leader Eric Cantor in the 2014 Republican primary] and he’s called for everyone getting a $200 tax credit to donate to campaigns.

Yeah, I’m familiar with John. And I was talking to Dave the other day, because I got a sense from his campaign that a lot of his narrative was around this — the feeling that Eric Cantor’s gone Washington, he’s part of the crony capitalism up there on Capitol Hill, and he’s forgotten the little guy on Main Street. And Dave Brat really capitalized on that sentiment and was successful. And that’s the same thing I’m saying, coming from the left and the people I meet every single day. Which includes moderates — a lot of moderates opt out of voting and getting involved in the financing of campaigns because they feel like their voice doesn’t matter.

Are there systems similar to this in the U.S. now besides in New York City?

Connecticut has a pretty robust public financing system that rewards candidates that collect small donations with some grant funding and other public support. They’ve seen a real impact from that, in the kind of policy that their state legislature has been able to pass since they put that system in place. They’ve done good things with the minimum wage, they’ve done good things with daycare. And they were able to do it because some of the powerful interests, that were standing in the way and funding campaigns, don’t have as much influence anymore.

Given the recent Supreme Court decisions, it seems like it’s a much more plausible way forward to add money from regular people to the system rather than limiting the amount from other places.

I will mention that a good thing about our approach is that we’re not trying to put any limits on anybody’s speech, we’re actually giving speech to people who feel right now that they don’t have it. That way we don’t get tangled up with our proposal in this whole First Amendment debate, or in the jurisprudence of the Supreme Court, which has led to a call for a constitutional amendment.

And this is really important: if you do transparency and disclosure — which I support — all that’s doing is just putting a referee on the field to blow the whistle when the big money players go over the line. Yeah, there’s a ref down there, but you’re still watching, you’re not on the field yourself, you’re not a player.

So we wanted to design something that said to the people up in the bleachers: “Hey, guess what — we’re going to play a new kind of game where you actually get to come onto the field.”

You’re not meeting the candidates now, they’re all going out to meet [casino magnate and major donor to right-wing causes] Sheldon Adelson on the field. They’re not going to listen to you. But with this you’re on the field.

To me that’s so much more exciting and inspirational as a response to the situation we find ourselves in.