U.S. Aid to Yemen Has Been Rotting Away in Virginia Warehouse for 8 Years

A large portion of the equipment has deteriorated in some way, including expired medical supplies, corroded batteries and low-grade explosives, according to a new GAO report.

Two hundred parcels of U.S. taxpayer-paid supplies intended to help Yemen protect itself from terrorists have been literally rotting away in a private storage facility in Virginia since 2007.

The items “remain unshipped in a private warehouse in Virginia rather than meeting the intended goal of building and maintaining Yemeni security forces’ capability to counter threats such as al Qaeda in the Arabian Peninsula (AQAP),” wrote the Government Accountability Office in a report issued Wednesday.

A large portion of the equipment has deteriorated in some way, including expired medical supplies, corroded batteries and low-grade explosives. Some of the materials are hazardous and will require special disposal techniques. 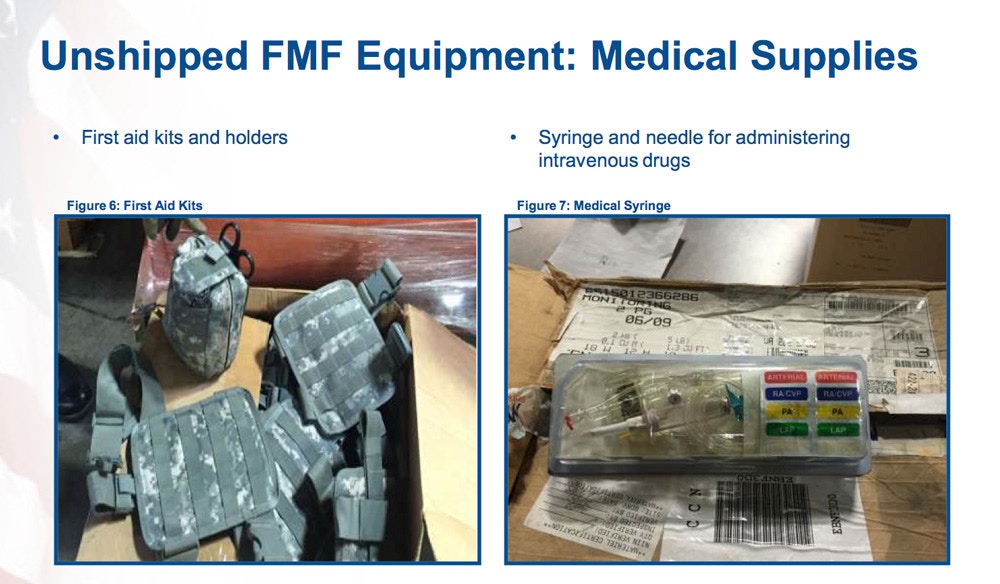 Among the parcels: Night-vision goggles originally valued at around $600,000, which require a special license from the State Department to export to foreign military units. Those licenses have since expired.

The government of Yemen purchased the equipment from the United States using Foreign Military Financing grants. Those taxpayer-funded grants allow the U.S. to offer defense and training equipment to certain partner nations.

The Department of Defense claims the items never got delivered “because of a lack of time, resources and ready access to the equipment owned by the government of Yemen.” The Pentagon blamed continuing delays on its inability to mediate disagreements between the government of Yemen and a private freight company.

Just last year, the Pentagon worked out a deal: The freight company would deliver the parcels in return for an $8,000 payment from the government of Yemen — and the Pentagon would then reimburse Yemen that $8,000. But no dice. “The embassy of Yemen indicated they did not have the funds available to pay due to the ongoing crisis in their country,” the report said.

Yemen remains in desperate need of defense equipment. The United States considers al Qaeda in the Arabian Peninsula, which is based in Yemen, a top security threat. Just this week, the United Nations Emergency Relief Coordinator stressed that Yemen is facing “terrifying” violence amidst its civil war between government and Houthi rebel forces. According to the U.N., 21 out of 25 million people desperately need humanitarian aid in Yemen.

This is not the first time the GAO has critiqued U.S. inefficiency in assisting Yemen. The Senate commissioned the GAO to review U.S. efforts to provide security for Yemen last summer. In April, it determined that 10 out of 11 projects amounting to almost $254 million worth in aid are affected by delays, and that DOD sometimes offered inaccurate data about those projects.