Donald Trump Says He Can Buy Politicians, None of His Rivals Disagree

Trump was illustrating the key problem with the current campaign finance system: It has essentially legalized bribery. 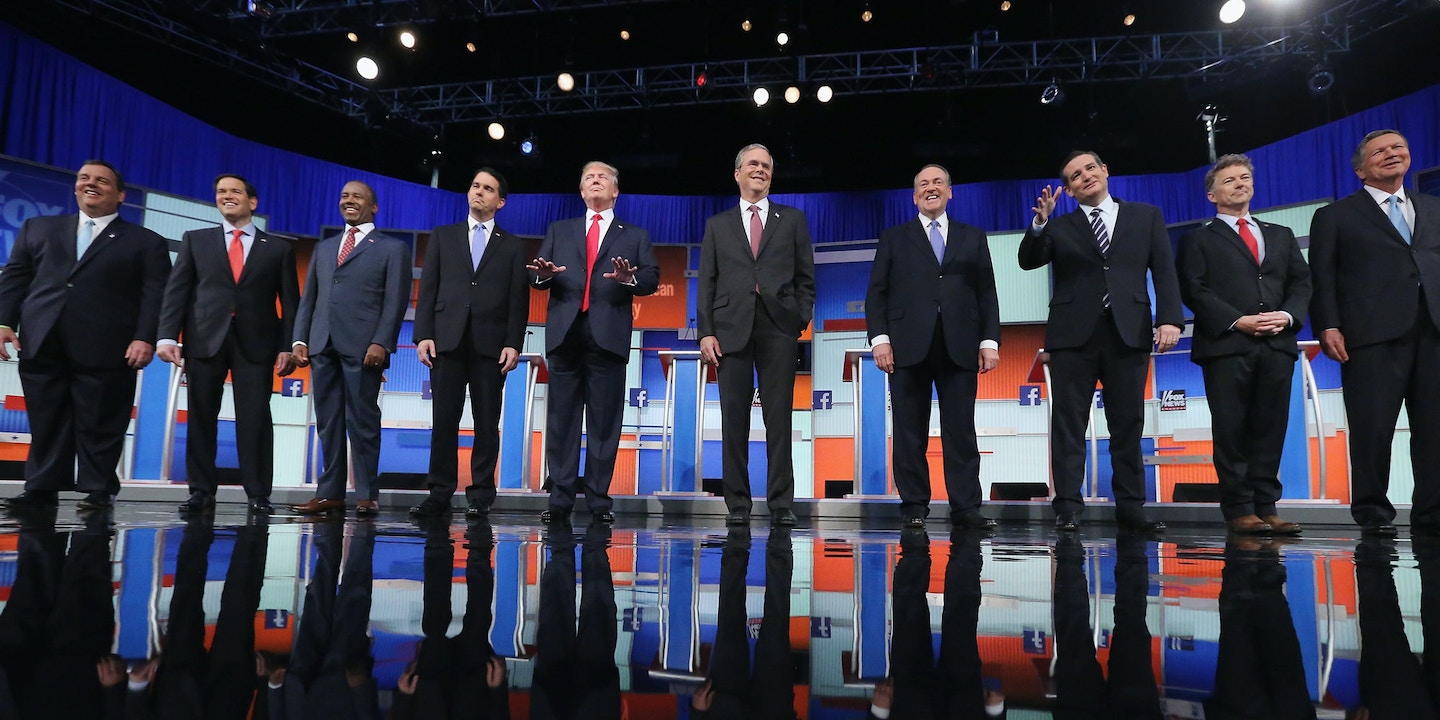 Donald Trump bragged Thursday night that he could buy politicians — even the ones sharing the stage with him at a Republican presidential debate.

Trump was asked about something he said in a previous interview: “When you give, they do whatever the hell you want them to do.”

“You’d better believe it,” Trump said. “If I ask them, if I need them, you know, most of the people on this stage I’ve given to, just so you understand, a lot of money.”

The only complaints came from two candidates who yelled that they had received no Trump money. As Trump continued to talk, he was interrupted by Sen. Marco Rubio, R-Fla., complaining that Trump instead gave campaign contributions to Rubio’s Democratic opponent.

“I hope you will give to me,” said Gov. John Kasich of Ohio.

Without missing a beat, the real estate tycoon continued: “I was a businessman. I give to everybody. When they call, I give. And you know what? When I need something from them, two years later, three years later, I call them, and they are there for me.” He added, “And that’s a broken system.”

Repeatedly asked what he got in return for his donations, Trump said: “With Hillary Clinton, I said be at my wedding and she came to my wedding. You know why? She didn’t have a choice because I gave. I gave to a foundation that, frankly, that foundation is supposed to do good.”

Though it surely wasn’t his intention, Trump was illustrating the key problem with the current campaign finance system. Campaign contributions are legally considered bribes only when there is an explicit quid-pro-quo. But as Trump explained, giving money to politicians bought him access and relationships, which he could leverage down the road in the form of favors. Such conflicts of interest are inherent in privately funded election systems.

No one on stage disputed Trump’s depiction of the American political system. In fact, it was taken as a given.

Earlier in the debate, Sen. Rand Paul, R-Ky., had stated that Trump “buys and sells politicians of all stripes.” He wasn’t so much complaining that big donors like Trump can buy and sell politicians as grumbling that Trump should only purchase Republicans. (Trump, indicating toward Paul, responded: “Well, I’ve given him plenty of money.”)

Trump has indeed made a considerable number of political donations, as recorded by OpenSecrets.org. But those records don’t show a contribution to Paul.

At another point, Trump said that the U.S. health care system is badly designed because “the insurance companies … have total control of the politicians” with which they’re “making a fortune.”

Other candidates also referenced the corrupting influence of money in politics. Former Arkansas Gov. Mike Huckabee stated that “the problem is we have a Wall Street-to-Washington access of power that has controlled the political climate.” He continued: “The donor class feeds the political class who does the dance that the donor class wants. And the result is federal government keeps getting bigger.”

Sen. Ted Cruz, R-Texas, said that there are many “career politicians in both parties who get in bed with the lobbyists and special interests.”

Last weekend, GOP contenders Cruz, Rubio, Walker, Jeb Bush and Carly Fiorina attended a private meeting of elite campaign donors at a retreat in Southern California organized by Koch Industries chief executive Charles Koch. At the time Trump tweeted: “I wish good luck to all of the Republican candidates that traveled to California to beg for money etc. from the Koch Brothers. Puppets?”