The Puritanical Glee Over the Ashley Madison Hack

We love to think of ourselves as so progressive and advanced, yet so often leap at the opportunity to intervene and wallow in, and pass judgment on, the private sexual choices of other adults.

High school students have long read The Scarlet Letter, the 1850 novel by Nathaniel Hawthorne set in a Puritanical Massachusetts town in the mid-17th century. It chronicles the life of a woman who is found to have committed adultery (on her long-presumed-lost-at-sea husband); as punishment, she is forced to stand before her village with the letter “A” attached to her dress. The intent is to forever publicly shame her for her moral transgression. As The Atlantic noted in 1886, “the punishment of the scarlet letter is a historical fact.”

The moral premise of that ritual, its animating righteousness, is by no means an obsolete relic of the Puritanical era. It is as vibrant as ever. Busybodies sitting in judgment of and righteously condemning the private, sexual acts of other adults remains one of the most self-satisfying and entertaining — and thus most popular — public spectacles. It simultaneously uplifts the moral judges (I am superior to that which I condemn), distracts them from their own behaviors (I am focused on those other people’s sins, and thus not my own), and titillates (to condemn this, I simply must immerse myself in the tawdry details of their sexual acts). To see just how current is the mentality driving the scarlet letter, observe the reaction to the Ashley Madison hack.

Anonymous hackers yesterday published a massive trove of data containing private information about roughly 33 million people from around the world. The data was hacked from the website Ashley Madison, which promotes itself as a pro-infidelity venue where married people can find sexual partners and “have an affair.” The data published by the hackers includes the names, physical and email addresses, and credit card purchases provided by the users, along with whatever information they posted about their sexual desires and proclivities.

The primary justification offered by the hackers was that the site is a scam. The hackers complain that most of the female profiles were fake (a claim that has some evidence), and that the site demanded a payment of $19.99 in exchange for the unfulfilled promise to permanently delete users’ profiles and personal data. When the hackers last month announced their hack, they portrayed themselves as fraud-fighting vigilantes: They threatened to release all of the users’ data unless the site owners removed the site completely.

But there was also a significant component of sexual moralism to the hacker’s self-described mission. In their original manifesto, they echoed the moral paternalism offered by Gawker’s Max Read to justify his site’s outing of an obscure married financial officer of a magazine company. The hackers proclaimed: “Too bad for those men, they’re cheating dirtbags and deserve no such discretion.” In yesterday’s statement announcing their data dump, the hackers directly lectured the users they were exposing with this sermon: “Learn your lesson and make amends. Embarrassing now, but you’ll get over it.”

That the cheating scoundrels of Ashley Madison got what they deserved was a widespread sentiment yesterday. Despite how common both infidelity and online pornography are, tweets expressing moralistic glee were legion. Websites were created to enable easy searches of the hacked data by email address. An Australian radio station offered to tell listeners on air if their spouse’s names appeared in the database, and informed one horrified woman caller that her husband’s name did.

The Washington Post actually promoted those newly created searching sites under the encouraging headline “How to Search The Ashley Madison Leak,” helpfully linking to a site that “will tell you if an e-mail address or phone number appears in the leaked files.” When the leak was first announced last month, the Post published a similar article headlined “Was your spouse on Ashley Madison? A new breed of private eye is ready to help.” 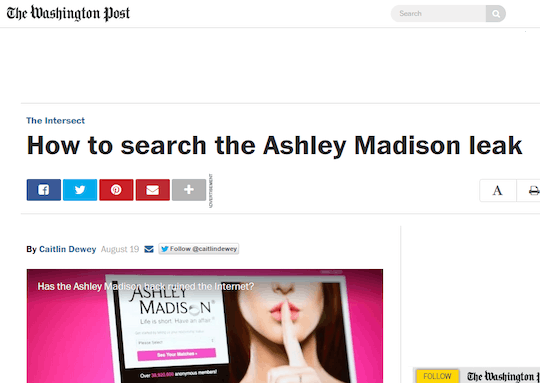 The names of various prominent figures appearing in the database have already been published, some of whom insist they never used the site.

It’s hard to overstate the devastation to some people’s lives from having their names published as part of this hack: not only to their relationships with their spouses and children but to their careers, reputations, and — depending on where they live — possibly their liberty or even life. What appears on the Internet is permanent and inescapable. All of the people whose names appear in this database will now be permanently branded with a digital “A.” Whether they actually did what they are accused of will be irrelevant: Digital lynch mobs offer no due process or appeals. And it seems certain that many of the people whose lives are harmed, or ruined, by this hack will have been guilty of nothing.

For numerous, obvious reasons, the fact that someone’s name appears in the Ashley Madison database does not mean they have engaged in marital infidelity. To begin with, it is easy to enter someone else’s name and email address, as happened to The Intercept’s Farai Chideya. Beyond that, there are all sorts of reasons someone may use this website without having cheated on their spouse. Some may use the site as pornography because it titillates them, or because they are tempted to cheat but are resisting the urge, or because they’re married but in a relationship where monogamy is not demanded, or because they’re researchers or journalists observing this precinct of online interaction, or countless other reasons. This permanent, highly public shaming of these “adulterers” is not only puritanical but reckless in the extreme, since many who end up branded with the scarlet “A” may have done absolutely nothing wrong.

This underscores how invasions of digital privacy can be as misleading as they are invasive. It is similar to the NSA’s analysis of metadata — with whom one communicates, where one goes — to determine who is a terrorist and who should be targeted with drones. Algorithmic assumptions of those sorts can lead to looking at someone who visits Taliban hotspots and communicates with Al Qaeda members and declaring them based on that data to be a leading terrorist — when, in fact, the “terrorist” is nothing more than the Pakistan bureau chief of Al Jazeera engaged in that behavior in order to do his job.

But let’s confine ourselves to a discussion of those who actually used the Ashley Madison site to “cheat” on their spouse in the worst possible sense of that word: namely, used it to find and have sex with someone outside of their marriage despite a vow of monogamy. Even in that scenario, adultery, as Adam Johnson put it, “is a moral misdemeanor,” something the law does not even punish. To destroy someone’s reputation and life over it is so wildly out of proportion to the actual transgression.

In some cases, even that form of adultery may not be unambiguously wrong, or wrong at all. When the hackers first threatened last month to disclose their hack, Dan Savage asked a great question: How could someone be so furious at Gawker for outing one adulterer, but take pleasure in this Ashley Madison hack, which invades the privacy of millions? To make his case, Savage referenced the point I made about Max Read’s justification for the Gawker outing and wrote this:

Long-term marriage, like Glenn Greenwald says, is a complicated dynamic, and people invent all sorts of ways to manage that complicated, long-term dynamic—and, yes, cheating is one of the ways people manage that dynamic. It’s not ideal, it would be great if everyone who felt compelled to cheat could either negotiate an open relationship or end the one they’re in now, but sometimes cheating is the least worst option. Slogging through the Savage Love mail for the last 25 years has convinced me of this: There are a lot of people out there who have good cause to cheat. Men and women trapped in sexless marriages, men and women trapped in loveless marriages, men and women who have essentially been abandoned sexually and/or emotionally by spouses they aren’t in a position to leave—either because their spouses are economically dependent on them (or vice versa) or because they may have children who are dependent on both partners.

Take a woman who has two children with special needs, who has been out of the workforce for 15 years, and who is financially dependent on a husband who decided five years into their marriage that he was “done with sex” but refuses to allow her to have sex with anyone else. The marriage is good otherwise, she and her husband have an affectionate, low-conflict relationship, their kids are happy and well cared for, but sexual deprivation is driving her out of her mind and threatening both her marriage and her children’s health and security. What would you advise this woman—whose letter, coincidentally enough, came in today’s pile of e-mail—to do? I would advise her to do what she needs to do to stay married and stay sane. (And until this morning I might have advised her to join Ashley Madison.)

Or say you’re a gay man or lesbian forced through societal or religious pressure into a heterosexual marriage, and “cheating” is your only form of sexual fulfillment: Is that clearly morally wrong? If you’re a minister in Puritanical Boston, or Queen Victoria, bitter condemnation of adulterers in all cases may come easy. But if you’re a rational person living in the 21st century, aware of all the complexities of adult sexuality and marital arrangements, the picture is far murkier.

But whatever else is true, adultery is a private matter between the adulterer and his or her spouse. Except in the most unusual cases — such as a politician hypocritically launching morality crusades against others — it’s most definitely not any of your business. None of us should want (ironically) anonymous hackers serving as vigilante morality police by exposing the private sexual acts of other adults. Nor should any of us cheer when the private lives of ordinary people are indiscriminately invaded, no matter how much voyeuristic arousal or feelings of moral superiority it provides. We love to think of ourselves as so progressive and advanced, yet so often leap at the opportunity to intervene and wallow around in, and sternly pass judgment on, the private sexual choices of other adults.

UPDATE: In response to a moralizing commenter, an Ashley Madison user tells his/her story in the comments section, and it’s well worth reading. 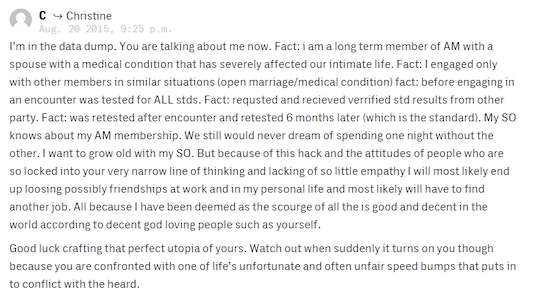