A lawsuit says Wells Fargo contractors illegally broke into David Adier’s family home and stole treasured family belongings that his father had spirited out of Nazi-occupied France in 1940. The few remaining defenders of the Obama administration’s failure to prosecute the executives who helped cause the 2008 financial crisis argue that the bankers’ actions were unethical but not criminal. President Obama himself has made this claim: “Some of the most damaging behavior on Wall Street … wasn’t illegal,” he told Steve Kroft on 60 Minutes in December 2011.

The president might want to take this up with David Adier, who says he was victimized by Wells Fargo breaking and entering into his family’s home in Morris Township, New Jersey, and then committing property damage and theft. Burglary is a felony subject to prison time — if anybody but a bank does it.

Adier’s case is doubly disturbing because of what was taken: items his father retrieved from his family’s apartment in France before fleeing the Nazis in 1940, including a Kiddush cup, a Seder plate and a sewing machine used by his grandmother.

Adier has since filed suit against Wells Fargo. According to the complaint, Wells Fargo’s contractors deemed the house abandoned, despite explicit instructions that it was not. The house had been in Adier’s family for 40 years, Adier and his sister had grown up there, and Adier’s father had lived there until his death in August 2012. According to Adier, who lives 30 miles away in Bayonne, he missed two payments on the home’s mortgage over the next several months due to troubles with his small business. On November 29, 2012, Wells Fargo’s contractors illegally broke in for the first time.

“I feel like they ripped my family history from me,” said Adier. “This was the house I grew up in, where I had nothing but great family memories. They’ve taken away my life, my childhood, my sense of security.” Adier is not alone. Since the beginning of the foreclosure crisis in 2007, banks have hired contractors to inspect properties in foreclosure and determine whether they are abandoned. If they make that subjective determination — based on overgrown grass, or a broken window — they are authorized to enter the home, change the locks, and “trash-out” the property by removing all belongings.

Homeowners have been complaining for years about coming home to find that their keys no longer work. Contractors took the remains of Mimi Ash’s late husband. They took Angela Iannelli’s pet parrot, Luke. They took the American flag off a house belonging to Rick and Sherry Rought, who had bought it entirely in cash from Deutsche Bank after the bank had foreclosed on its previous owners. Nilly Mauck’s condo was trashed because contractors mixed up the number of the property they were supposed to inspect. Nancy Jacobini’s home was broken into while she sat on her couch; she locked herself in the bathroom and called 911. A year later, the same contractor broke in again.

“I’ve got this client, they are away from their home,” said Matt Weidner, a foreclosure defense attorney in St. Petersburg, Florida. “They come home to find a dude in there hacking their goddamn house apart. There’s a hammer sitting in the wall, like they said fuck it, we’re done for the day, we’ll just shove this in here.” The partially demolished home has sat that way for three years, amid litigation.

Denbeaux blames the business model. According to contracts he has acquired in discovery, banks pay contractors a small fee to do the drive-by inspection, but several hundred dollars to padlock the doors, and hundreds more for a trash-out. “Whether they do a lock-out or a trash-out is based on a report by day laborers,” Denbeaux said. “They know how to say the property is abandoned and make money.”

“I’ve had cases in which people had summer homes ransacked because they were ‘abandoned’ in January,” Denbeaux continued. “Have you tried surfing on the Jersey shore in January?”

Adier believes this kind of calculation led to the trash-out of his family’s home. David’s father, Henri Adier, escaped occupied France in 1940. The Nazis had sealed off apartments belonging to Jewish residents, and Henri and his family snuck back in to retrieve items of personal significance. “They made pains to keep the seal on,” David said. “They took what they could get and fled into the night.”

Henri Adier eventually took those heirlooms to Morris Township after World War II, where he got married and taught French to students at Morristown High School. Later in life, David’s mother contracted diabetes and Henri contracted Parkinson’s disease. David cared for his parents for 15 years, with his father finally passing away in August 2012.

The mortgage on the house was current at the time of Henri Adier’s death, and David was the executor of the estate. His business was significantly damaged during Hurricane Sandy at the end of October 2012, making it difficult for him to catch up on the two payments then in arrears.

Soon afterward, David’s sister found stickers on the property from the mortgage services company LPS, saying that inspectors believed the house to be abandoned, and if they didn’t hear from the residents they would “protect their interest in the property.”

According to the Adier lawsuit, David’s sister called LPS and received assurances that nobody would take action. Nevertheless, LPS broke into the house on November 29, 2012, changed the locks and “winterized” the property. “I was shocked to find out they had ransacked the property,” David said. “They opened every cabinet, every box and helped themselves to whatever they wanted.” They even stole the brass door-knocker on the front of the house, David alleged, along with the relics his father had spirited out of France. The damage ruined any chance to rent out the property and generate income.

During this period, when David contacted Wells Fargo, he was told he “was not the person on the deed.” According to David, Wells Fargo asked for the death certificate, then paperwork affirming that he was the executor of the estate. He didn’t get the right to talk to the bank until March 2013.

Tom Goyda, a spokesperson for Wells Fargo, claims that “the home was unlocked and in disarray” when contractors came to secure it. He added that Wells Fargo was unaware of any items removed from the home until mid-2014.

Under New Jersey law, mortgage companies are responsible for securing abandoned properties and can be held liable for code violations. Goyda said contractors performed exterior maintenance on the property to keep it to code. “While we hold our property preservation vendors and our own team members to high standards of honesty and integrity, and we take any claims like those being made in this case very seriously, we have found nothing to support the allegations made in the lawsuit.”

Adier countered that the house was not even in foreclosure when contractors first broke in — in fact, the foreclosure process did not begin until March 2013 and is still not complete. Even if a property is in foreclosure, without a court order banks do not have the right to enter if they are informed it is not abandoned. “They either need to own the property as a result of a sale, or they need a judge to say, even though this is not your property, you can go in,” said Denbeaux, Adier’s lawyer. “Wells Fargo never sought a court order in this case.” 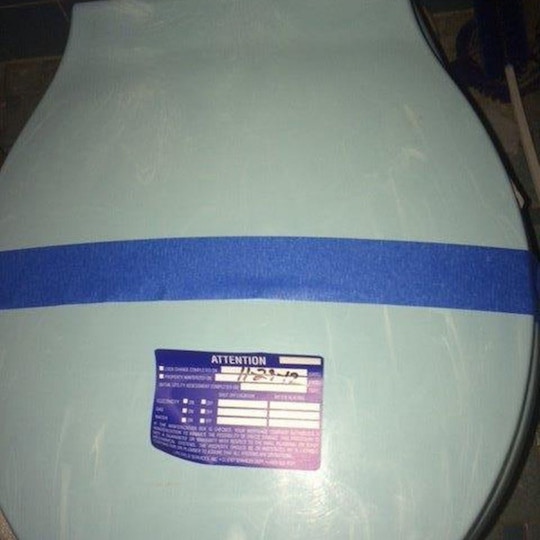 Last year, the inspector general for the Federal Housing Finance Agency accused contractors of routinely disregarding signs of habitation and illegally breaking into homes. The inspector general called the practice of property preservation “largely unregulated” and riddled with fraud. The banking industry responded by promising stronger background checks of contractors. But the complaints have continued.

Neighbors informed the Adiers each time contractors were on the property. Morris Township police refused to investigate, calling it a “civil matter.” After years of what David Adier called a “cat-and-mouse game,” he filed suit in New Jersey Superior Court last month, seeking compensation for trespassing and negligence.

“It was a complete and utter violation,” David Adier said. “I devoted 15 years of my life dealing with my parents’ health needs. I thought I’d be able to get some peace. I’ve had no peace.”