NYT Claims U.S. Abides by Cluster Bomb Treaty: The Exact Opposite of Reality

For the NYT to tell its readers that the U.S. — one of the leading cluster bomb states on the planet — is actually one of the countries that “have not yet joined the treaty but have abided by its provisions” is nationalistic propaganda of the most extreme kind.

The New York Times today has a truly bizarre article regarding the U.S. and cluster bombs. The advocacy group Cluster Munition Coalition just issued its annual report finding that cluster bombs had been used in five countries this year: Syria, Libya, Yemen, Ukraine and Sudan. This is what The Paper of Record, in its report by Rick Gladstone, said this morning about the international reaction to that report (emphasis added):

As Americans, we should feel proud that our government, though refusing to sign the cluster ban treaty, has nonetheless “abided by its provisions” — if not for the fact that this claim is totally false. The U.S. has long been and remains one of the world’s most aggressive suppliers of cluster munitions, and has used those banned weapons itself in devastating ways.

In December 2009 — just weeks after he was awarded the Nobel Peace Prize — President Obama ordered a cruise missile strike on al-Majala in southern Yemen. That strike “killed 35 women and children.” Among the munitions used in that strike were cluster bombs, including ones designed to scatter 166 “bomblets.”

Although the U.S. at first refused to confirm responsibility, a Yemeni journalist, Abdulelah Haider Shaye, visited the scene and found irrefutable proof that it was done by the U.S., a finding subsequently confirmed by Amnesty International as well as a cable released by WikiLeaks. As a result of Shaye’s reporting of U.S. responsibility, President Obama demanded that the Yemeni journalist be imprisoned and the Yemeni puppet regime complied; Amnesty’s Philip Luther said at the time that “there are strong indications that the charges against [Shaye] are trumped up and that he has been jailed solely for daring to speak out about U.S. collaboration in a cluster munitions attack which took place in Yemen.” So not only did Obama use cluster bombs against Yemeni civilians, but he then forced the imprisonment for years of the Yemeni journalist who reported it. 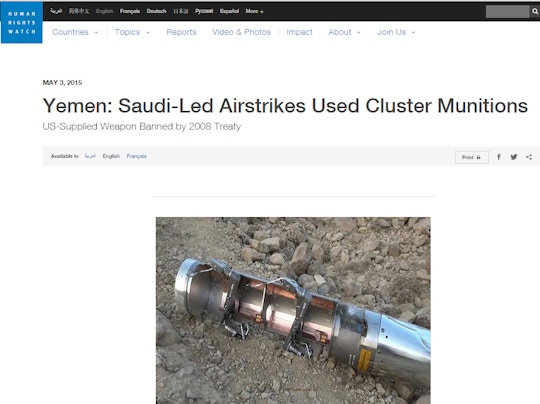 As Iona Craig reported for The Intercept this week from Yemen, “The American government has also supplied intelligence, in-flight refueling of fighter jets, and weapons [for the “Saudi-led” attack], including, according to rights organizations, banned U.S. cluster munitions.” Indeed, citing the Human Rights Watch findings, the New York Times itself reported in May that “the Saudi-led military coalition fighting a rebel group in Yemen has in the past few weeks used cluster munitions supplied by the United States.” The same article noted:

Both Saudi and American military forces have deployed cluster munitions in Yemen before the most recent conflict, according to human rights groups. In 2009, Saudi warplanes dropped cluster bombs during attacks on the Houthis in Saada, their home province.

Reporting from Yemen for Rolling Stone in May, Matthieu Aikins described the ample evidence that U.S.-supplied cluster bombs are being used indiscriminately against civilians. Last month, Mother Jones’ Bryan Schatz wrote an excellent summary of all the ways the U.S. has been central to the horrific Saudi slaughter of Yemeni civilians, including the supplying of cluster munitions. The U.S. has long been supplying cluster bombs to the Saudis. In August 2013, Foreign Policy noted a Defense Department press release proudly announcing that “the U.S. military [is] selling $640 million worth of American-made cluster bombs to Saudi Arabia, despite the near-universal revulsion at such weapons.” As the headline of a superb May 2014 Vice article succinctly put it: “U.S. Cluster Bombs Keep Killing Civilians in Yemen”; the on-the-scene reporters, Ben Anderson and Peter Salisbury, provided extensive video and first-hand witness evidence to prove the truth of that statement.

The U.S. use and supply of cluster bombs is long and ugly. In 2006, Israel used American-made cluster munitions to kill hundreds of civilians in Lebanon; Hezbollah reportedly fired them into Northern Israel. The NYT’s Gladstone himself, in a 2014 article, actually noted the massive Israeli usage, though omitted that the weapons came from the U.S.’s re-supplying of the Israeli stockpile (emphasis added):

Israel’s military was widely criticized at home and abroad for its heavy cluster-bomb use in Lebanon, dropping around 1,800 of them, containing more than 1.2 million bomblets, particularly in the final days of the 34-day conflict with Hezbollah. The Israeli newspaper Haaretz quoted a commander of the Israel Defense Forces as saying, “What we did was insane and monstrous, we covered entire towns in cluster bombs.”

In that article, designed to warn of the increasing usage of cluster bombs in Syria, Gladstone cryptically noted that “only three other countries have suffered cluster bomb casualties that exceed Syria’s: Laos at 4,837, Vietnam at 2,080, and Iraq at 2,989.” Gladstone coyly doesn’t say, but guess who dropped most of those?

In 2011, The Daily Beast’s Lionel Beehner was shocked by Hillary Clinton’s audacity in condemning Libyan leader Muammar Gaddafi for using cluster bombs. He noted that the U.S. is “one of the world’s largest manufacturers of cluster bombs”; is “one of the few states, along with Libya, not to sign the 2008 Convention on Cluster Munitions”; that “American manufacturers love cluster bombs”; and that just “last year, the U.S. Air Force reportedly spent billions of dollars to purchase a batch of 4,600 cluster bombs from Textron, a New England-based arms manufacturer that also supplies munitions to Turkey, Oman and the United Arab Emirates.”

In 2009 and 2010, the Obama administration promulgated guidelines ostensibly to make their usage safer, including banning their sale starting in 2018 unless they have a dud rate of less than 1 percent (unexploded bombs pose massive risk to civilians, particularly children). But as Schatz detailed in a separate article in June, “Activists have reported finding more duds than allowed under the one-percent failure rate rule.” Ample evidence demonstrates these failures. Moreover, as Schatz reports:

The recent HRW reports also call [Textron’s] CBU-105’s performance into question. “What we’re seeing in Yemen is that they’re having trouble meeting this one percent criteria,” says [HRW’s Steve] Goose. “We have a photo with one of the canisters sitting on the ground with four skeets just sitting there. They never deployed.”

All of this makes the New York Times’ cluster bomb exoneration of the U.S. today nothing short of inexcusable. Under the treaty which The Paper of Record today claimed the U.S. honors, “States Parties may not stockpile cluster munitions, and must also destroy their existing stocks within eight years of joining.” The very first article of the Treaty states (emphasis added):

The U.S. does not occasionally violate one of those provisions. It continually violates all of them, systematically and as a matter of policy doing exactly that which the treaty expressly bans. For the NYT to tell its readers that the U.S. — one of the leading cluster bomb states on the planet — is actually one of the countries that “have not yet joined the treaty but have abided by its provisions” is nationalistic propaganda of the most extreme kind.