How Putin Controls the Internet and Popular Opinion in Russia

A new book by Andrei Soldatov and Irina Borogan reveals the subtle as well as forceful pressures that persuade Russian technology companies to comply with government censorship. THE KEY PARAGRAPH in Andrei Soldatov and Irina Borogan’s new book, The Red Web, comes surprisingly late, after the authors have described the long and ambitious construction of a wide-ranging, all-penetrating Internet surveillance and censorship system in Russia.

“To make the system work across the country, the filtering system required a lot of people,” they write, pointing out that many hands were needed to keep track of the data passing through all of the thousands of Internet service providers in the country. “The specialists needed technical training, had to comply with orders, no questions asked, and they had to protect the secrecy of the operations. … Russia had plenty of such specialists.”

These “specialists” didn’t just understand the technology — they were willing to use their knowledge to serve the state’s repressive machine. Borogan and Soldatov show precisely how those who enable censorship and surveillance justify their participation. Among the many people interviewed for the book is a Russian engineer who developed speech-recognition technology used by a number of repressive regimes. “If governments listen in on people’s conversations, it’s not the microphone’s fault!” he says.

As Soldatov and Borogan explain,

“These exact words have been repeated over and over again by engineers who willingly served the Soviet state and then did the same thing in Russia. They believed it was not their fault. When Stalin’s security services in the 1930s and 1940s needed to conduct secret research in particular areas, they arrested scientists and engineers and sent them to special installations, the sharashkas, which were closed off from the outside and heavily guarded. The scientists and engineers were motivated to produce quick results under the threat of being sent to labor camps if they failed. But in the years after Stalin’s death in 1953 this system evolved into a far-reaching system of research institutes, not all of them closed.”

In other words, by the 1970s the system had determined the minimum amount of pressure required to turn these people into its willing executioners — and it was minimal indeed. A little bit of privilege, even a decent salary combined with the opportunity to practice one’s trade, was often enough. This knowledge persists to this day, and continues to serve the regime of President Vladimir Putin. Publishers, driven not by the threat of death but by the fear of losing profit, become the state’s equal partners in censoring the printed word. Media owners, fretting over other business interests, lead their own editors and reporters to the slaughterhouse of honesty and creativity. 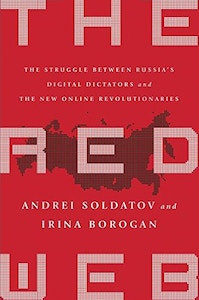 The main subjects of Soldatov and Borogan’s book, online service providers including ISPs, media outlets, aggregators, mail services and social networks, are constantly angling for a position from which it is safe to conduct business. To do this, they try to guess which way the wind is blowing and make adjustments before they are told to do so. Sometimes, they guess wrong and suffer the consequences. But usually, they guess right and succeed in helping the authorities constrict freedom of speech and information ever further — only to discover that they have to repeat the maneuver again and again, until they squeeze themselves out of existence.

Very rarely do they resist. Soldatov and Borogan describe one man who did. Pavel Durov, the founder and CEO of VKontakte, a Russian social network that has more users there than Facebook, twice resisted the authorities’ demands for user data. Last year, Durov was forced to give up his shares in the company, then his job at the helm, then his home in Russia altogether. Since going into exile he has poured his money and expertise into Telegram, a messaging service whose encryption and self-destruction features are designed to make it impervious to surveillance. Some of Russia’s few remaining anti-Putin activists have gained from Durov’s loss because they now use Telegram, but his story’s biggest impact has been on other tech entrepreneurs, who learned yet another lesson in the futility and danger of resistance.

For instance, one of the last scenes in the book is a 2014 meeting between Putin and the people who would conventionally be described as the country’s most powerful tech entrepreneurs — except in Russia they are powerless. Far from confronting the tyrant or pushing back, they use the hard-won meeting to try to ingratiate themselves with him, making a plea for “some sort of process that allows us not only to listen but also to be listened to” — and they walk away with nothing. Except, perhaps, vague relief that a mythical project called Cheburashka, which would create a perfectly isolated Internet system within Russia’s borders, wouldn’t be launched quite yet.

SOLDATOV AND BOROGAN BEGIN their story back in 1950, with the inventors of the Soviet Union’s first surveillance technologies, and they take more than a hundred pages to get to the current political era. They undertake the logical and necessary task of tracing the roots of Putin’s repression and censorship, pointing out various continuities between the spies and censors of the 20th century and today. They are working with several handicaps, however. Soldatov and Borogan are prominent investigative reporters who co-authored a previous book about the Russian security services, The New Nobility, but the pair are not particularly skilled storytellers, and a sloppy English translation renders their prose alternately inelegant and absurd. Their grasp of the history of the Soviet regime and dissident movements is approximate at best, and this helps make the book confusing and at times unconvincing. Their biggest handicap is no shortcoming of their own: They are trying to grasp the story of Russia’s shrinking space for talking, writing, and thinking from inside this space, which is closing on them even as they struggle to observe it.

In the absence of a big-picture understanding, Soldatov and Borogan fall back on facile narratives. In their view, information wants to be free so badly that it’s unstoppable, causing one Facebook revolution after another, ultimately overpowering reactionary systems of centralized control. Like many other writers, they describe the 2013-2014 Ukrainian revolution as having been sparked by a single Facebook post, and the protests in Russia in 2011 and 2012 as having been organized entirely on Facebook. These recycled myths betray incomplete knowledge about either revolution — the one that succeeded and the one that never took off — and fail to shed any light on the differences that may have determined the outcomes.

An example Soldatov and Borogan use to bolster their position is indeed striking. In 2014, even as Moscow was insisting that there were no Russian troops in Ukraine, Russian soldiers were posting boastful pictures from the war zone on their social network accounts. These posts confirmed the presence of Russian soldiers in Ukraine and led journalists to some of the most important stories of the war.

“Just as the invention of a printed page once enabled a free flow of ideas, so now simple tools like VKontakte and Facebook, widely used every day by average people in Russia, have created an environment in which information cannot be stopped,” declare Borogan and Soldatov.

Although the soldiers’ information wasn’t stopped, it didn’t accomplish much, alas. It was disseminated by foreign journalists and by a few tiny opposition media outlets in Russia. It will be invaluable to future historians. But it did not change the minds of the vast majority of Russians who get their news from state-dominated media and who support Putin’s every move. It didn’t even force President Obama to utter the word “war” when talking about Russia and Ukraine.

Masha Gessen is the author of Words Will Break Cement: The Passion of Pussy Riot.

Caption: Passengers look at their electronic devices inside the Moscow Metro on December 1, 2014.