The British outburst of denunciations of Corbyn has nothing to do with honest, consistent concern over anti-Semitism. For the past month Jeremy Corbyn, the British MP and democratic socialist who just won the election to lead the U.K.’s Labour Party in a landslide, has been vociferously accused across the British media of associating with political figures who are anti-Semitic.

“The problem,” according to the Community Security Trust, a U.K. Jewish organization, “is not that Corbyn is an anti-Semite or a Holocaust denier — he is neither. The problem is that he seems to gravitate towards people who are, if they come with an anti-Israel sticker on them.” Similarly, political journalist James Bloodworth wrote in the Guardian, “While I genuinely believe Corbyn does not have an anti-Semitic bone in his body, he does have a proclivity for sharing platforms with individuals who do.” The right-wing Telegraph got so excited it falsely claimed that another Labour MP had accused Corbyn himself of using “anti-Semitic rhetoric.”

Corbyn was forced to repeatedly respond in several venues. Beyond addressing the specific issues, he’s made several statements such as, “I’ve spent my life opposing racism. Until my dying day, I’ll be opposed to racism in any form. … Anti-Semitism, Islamophobia, far-right racism is totally wrong and absolutely obnoxious and I’ve made that absolutely clear to everybody who will listen to me on this subject.” And Corbyn’s spokesperson said that anyone found by the Labour Party’s procedures committee to be responsible for anti-Semitism should not be allowed to vote in the leadership election.

The most interesting part of the Corbyn fracas isn’t whether he’s “guilty” or not. It’s that the British media and politicians have created a guilt-by-association standard that appears to apply to Corbyn and Corbyn alone.

If the same standard were applied to establishment politicians, they’d all be far more guilty than Corbyn. Such politicians regularly meet with, praise and/or give enormous material support to people who’ve said or done things at least as bigoted or appalling as Corbyn’s associates — and there’s nowhere near the same sustained outcry. Why? What accounts for the different reactions?

To understand this, it’s useful to sort politicians’ associations into a few categories:

• Politicians meeting with horrendous people when the politicians aren’t heads of state. Heads of state have less flexibility about whom they meet — and in fact arguably must meet with horrendous people. Corbyn, since he’s not the British Prime Minister, has more flexibility, yet has associated with figures with grievous flaws. But so has every establishment politician you could name. David Cameron shakes hands with Palestinian President Mahmoud Abbas in the shadow cabinet rooms of the Houses of Parliament on February 22, 2007 in London.

For instance, here’s David Cameron — in 2007, before he became Britain’s Prime Minister — having a happy meeting with a Palestinian leader who’s referred to the Holocaust as “the Zionist fantasy, the fantastic lie that six million Jews were killed.”

That Palestinian leader, of course, is Mahmoud Abbas, president of the Palestinian Authority. Abbas later contradicted his earlier statements on the Holocaust, first calling it “a terrible thing” in 2003 (while being shifty about how many people died), and then in 2014 describing it as “the most heinous crime to have occurred against humanity in the modern era.” But Corbyn’s associate Raed Salah also repudiated his use of the notorious anti-Semitic blood libel, which has made no difference to those damning Corbyn. So if associating with Salah is wrong for Corbyn, associating with Abbas should have been just as wrong for Cameron (and dozens of other Western politicians). 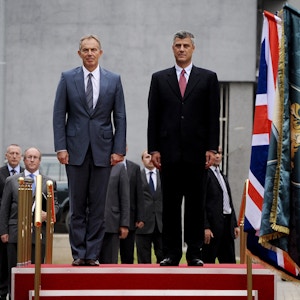 And here’s Tony Blair in 2010, three years after he stepped down as Prime Minster, receiving Kosovo’s “Golden Medal of Freedom.” The man standing next to him is Kosovo’s then-Prime Minister Hashim Thaci, whom the Council of Europe has accused of heading a crime ring that killed prisoners in order to sell their organs on the black market. (And here’s Thaci calling his friend Tony “a true hero.”) Since leaving office Blair also has reportedly been paid $13 million by Kazakhstan’s dictator Nursultan Nazarbayev, whose security forces have massacred and tortured regime opponents.

• Politicians giving material support to horrendous people when the politicians are heads of state. Perhaps heads of state have to meet with their awful counterparts, but they don’t have to sell them Typhoon fighter jets.

But that’s exactly what David Cameron has been anxious to do for Saudi Arabia and the United Arab Emirates. And Tony Blair killed an investigation into massive corruption involving the Saudi government and British arms manufacturer BAE.

Yet it hardly needs to be said that the Saudi government-controlled media has long been a sewer of anti-Semitism. Arab Radio and Television of Saudi Arabia notoriously produced “Horseman Without a Horse,” a multi-part series that treated The Protocols of the Elders of Zion as historical fact. Saudi censors have blocked the website of the Anne Frank House in Amsterdam. For its part, the UAE is (according to Anti-Defamation League polling) one of the 10 most anti-Semitic countries on earth. And here’s Condoleezza Rice having a friendly meeting in 2006 with Lebanese Druze leader Walid Jumblatt. George W. Bush and Dick Cheney met with him the next year, with Cheney saying, “I admire the courageous stand he’s taking for freedom and democracy.” During this period Jumblatt’s party was part of the Lebanese government, which was receiving hundreds of millions of dollars in military aid from the U.S. even as Jumblatt asked for more.

Yet Jumblatt had made shockingly anti-Semitic statements on many previous occasions. After Paul Wolfowitz survived a rocket attack in Baghdad in 2003, Jumblatt stated: “We hope that next time the rockets will be more accurate and effective in getting rid of this virus and his like, who wreak corruption in Arab lands.” He’s claimed that the real axis of evil is one of “oil and Jews.” And after a suicide bombing in Gaza in 2004 he declared that “the fall of one Jew, whether soldier or civilian, is a great accomplishment.”

• Politicians associating with people who aren’t generally recognized as horrendous enough to be shunned — but should be. In any rational world, it would be far more scandalous for any politician to cross paths with George W. Bush than the mostly powerless figures with whom Corbyn has shared a stage. Bush, after all, committed the “supreme international crime” of “initiating a war of aggression” and instituted a worldwide torture regime.

Yet Tony Blair traveled to Dallas in 2013 to celebrate the opening of the George W. Bush Library with Bush’s fellow war criminals. And here’s Bill Clinton in 2014 yukking it up with Bush — who’s now so close to Clinton that Bush calls him his “brother from another mother.”

So what accounts for the sudden depth and breadth of outrage over what was said years ago by Corbyn’s associates? It’s clearly not a genuine concern over actual anti-Semitism, or there would have been far, far more outrage at all the politicians who’ve given concrete, material support to very serious anti-Semites. Nor is it a principled objection to wrongdoing in general.

The answer is obvious: Corbyn’s casual ties to a small number of dodgy characters are simply a handy club with which to beat someone who defies the center-right consensus on U.K. domestic and foreign policy. It’s exactly analogous to constant U.S. and U.K. government and media “outrage” over human rights abuses carried out by our official enemies; i.e., totally insincere, given our government and media’s near-total silence about human rights abuses committed by our official friends. As a “senior U.S. official” told the Washington Post in 2013 about our real attitude toward human rights: “The countries that cooperate with us get at least a free pass … Whereas other countries that don’t cooperate, we ream them as best we can.” In precisely the same way, British politicians who cooperate with the U.K. establishment get a free pass; Corbyn does not, so he’s being “reamed” as best they can.

None of this is to say there are no legitimate grounds to criticize Corbyn. First, from a straightforward ethical standpoint, it may not be satisfying for Corbyn’s supporters to say that he is no worse than other politicians; they may want to demand that he be significantly, clearly better. And second, ethics aside, from the perspective of efficacy it would be preferable for Corbyn to be more careful. If he wants to have an impact on the world, and especially if he wants to improve the lives of Palestinians, he should be aware that the rules are different for anyone with his political positions, and act accordingly.

But there’s no question that the volume of current attacks on Corbyn have nothing to do with the facts about politics in Britain or the West generally. It’s just the machinery of power acting to protect itself — with all the gruesome hypocrisy that always involves.

An earlier version of this article stated that Kazakhstan’s dictator Nursultan Nazarbayev, rather than Uzbekistan’s dictator Islam Karimov, had boiled regime opponents alive. While in office Tony Blair also lent support to Karimov’s regime.
Wait! Before you go on about your day, ask yourself: How likely is it that the story you just read would have been produced by a different news outlet if The Intercept hadn’t done it? Consider what the world of media would look like without The Intercept. Who would hold party elites accountable to the values they proclaim to have? How many covert wars, miscarriages of justice, and dystopian technologies would remain hidden if our reporters weren’t on the beat? The kind of reporting we do is essential to democracy, but it is not easy, cheap, or profitable. The Intercept is an independent nonprofit news outlet. We don’t have ads, so we depend on our members — 35,000 and counting — to help us hold the powerful to account. Joining is simple and doesn’t need to cost a lot: You can become a sustaining member for as little as $3 or $5 a month. That’s all it takes to support the journalism you rely on.Become a Member