SEC Chair Mary Jo White is considering ousting James Doty as head of the Public Company Accounting Oversight Board, in favor of someone more amenable to corporate sensibilities. 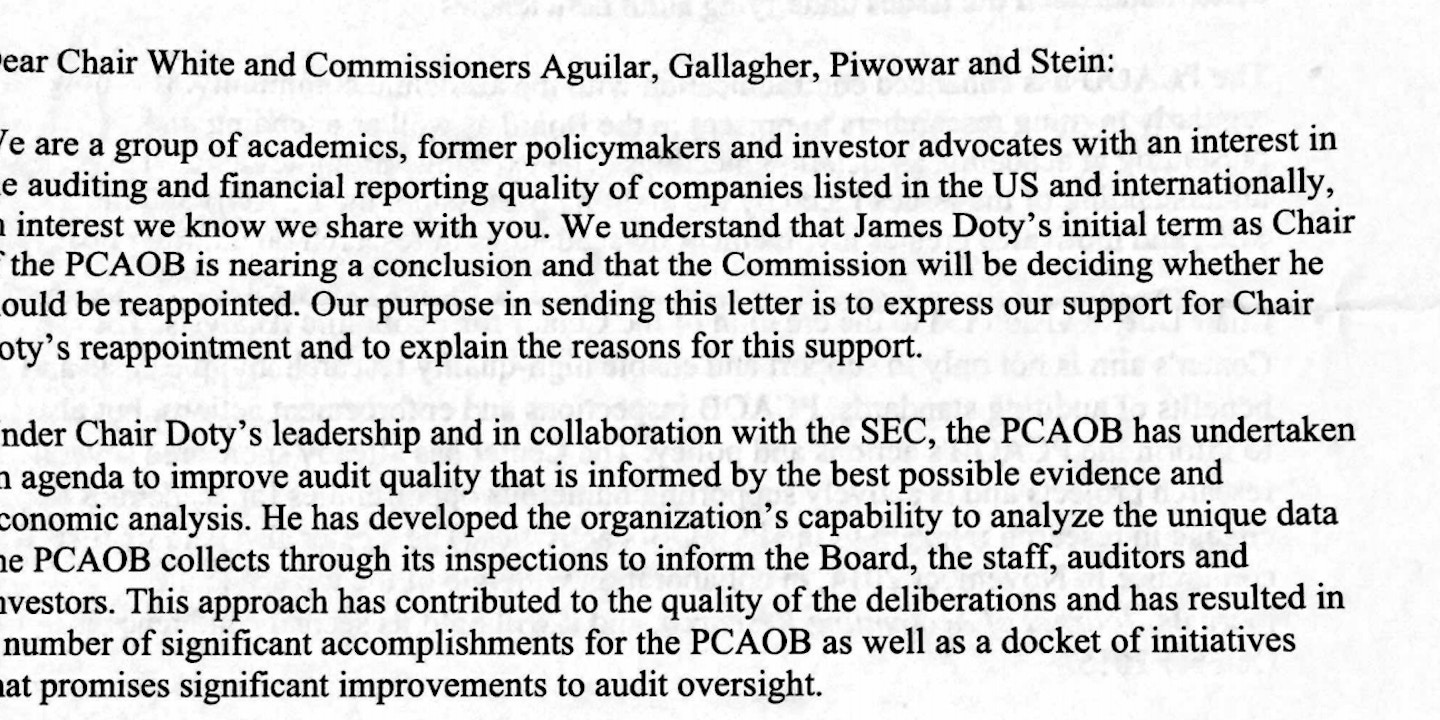 The battle over an obscure yet important regulatory agency heated up on Wednesday as the progressive activist organization Credo demanded that SEC Chair Mary Jo White recuse herself from selecting the next head of the Public Company Accounting Oversight Board (PCAOB).

The oversight board was created after the Enron debacle, and charged with policing the big accounting firms whose audits are supposed to keep public companies honest. Its current chair, James Doty, has turned into one of the most persistent regulatory reformers in Washington.

White is considering ousting Doty in favor of someone more amenable to corporate sensibilities. White’s husband, John White, a partner with the corporate law firm Cravath, Swaine & Moore, sits on the PCAOB’s Standing Advisory Group. And Credo says that he and his Wall Street clients may be influencing her decision-making.

The PCAOB regulates auditors, who are supposed to independently assess whether public companies are delivering accurate financial information to investors — or cooking their books. Timely auditing can ferret out financial fraud, protecting investors and the broader economy.

But just four firms — Deloitte, PricewaterhouseCoopers, Ernst & Young and KPMG — control virtually all the auditing of public companies in the United States. And they often have lucrative business consulting relationships with the firms they audit. With only self-policing, auditors have every incentive to put their future profits ahead of the truth.

After Enron — when its auditor, the now-defunct Arthur Andersen firm, was convicted and driven out of business for shredding audit documents — Congress believed that the watchmen had to be watched as well. They passed the Sarbanes-Oxley Act, which inaugurated the PCAOB, a non-profit corporation that sets auditing standards. Its five-member board gets appointed by the five SEC commissioners. James Doty, chair of the Public Company Accounting Oversight Board, poses in his office in Washington, D.C., on Thursday, Feb. 10, 2011.

Since January 2011, Doty, a former SEC general counsel under George H.W. Bush, has served as PCAOB chair. He has earned respect from both sides of the aisle, as evidenced by a letter recommending his re-appointment signed by numerous academics, former SEC chairs of both parties, Vanguard CEO John Bogle and Paul Volcker, the former chair of the Federal Reserve.

The letter’s signers commend Doty for negotiating agreements to oversee Chinese auditors of firms that trade in U.S. stock markets, improving the PCAOB’s ability to conduct auditing inspections and creating the Center for Economic Analysis, which uses high-quality research to inform the regulator’s actions.

His impact can also be seen in the U.S. Chamber of Commerce’s criticism that he has placed “new burdens” on its members.

Much of Doty’s best work has come outside the rule-making process, because the five-member board has been deadlocked on most key issues. While Doty and Steven Harris, a former aide to Sarbanes-Oxley author Paul Sarbanes, support stiffer rules, board members Jay Hanson and Jeanette Franzel have consistently opposed them. Lewis Ferguson, a Democrat and former corporate lawyer at Williams & Connolly, is the swing vote. That has put him in a position to prevent Doty’s reforms from seeing the light of day.

This has hampered Doty’s efforts to require individual auditors to sign their names to company audits, and to rotate auditing firms away from their clients every 10 years, so they don’t establish a cozy relationship with their employers.

Ferguson is a candidate to replace Doty as chair, according to Bloomberg; the other is William Duhnke, currently Republican staff director and general counsel for the Senate Banking Committee.

Both Democratic SEC commissioners, Kara Stein and Luis Aguilar, support reappointing Doty, whose term ends in October, and Doty has said he would like to be reappointed. But White told reporters earlier this month that she is “identifying interested and qualified candidates” for the job.

Liberal groups believe that White’s husband’s position presents a conflict of interest when it comes to choosing the next chair. John White’s law firm appears to be sensitive to these ties: After openly promoting his position on the PCAOB Standing Advisory Group, Cravath, Swaine & Moore deleted any mention of it on their website when a news story about the conflict was published.

Doty’s critics are not only on Wall Street, however. Some top SEC staffers are waging a turf war to neuter the upstart agency. As John Coffee of Columbia University put it in a blistering report in the New York Law Journal, “The more you succeed, the more you attract enemies.”

The SEC’s Office of the Chief Accountant used to have power over auditors, but lost prestige with the PCAOB’s emergence. “This has not gone unnoticed at the Chief Accountant’s office, which would like to view the PCAOB as merely a subordinate vassal agency,” writes Coffee.

Current chief accountant, James Schnurr, is a former vice chairman at Deloitte, one of the Big Four auditing firms. Since being hired last year, he has consistently criticized the PCAOB. Last December he said that its rule-making priorities “simply have been moving too slowly.” In February he said that Doty was “too focused on its disclosure efforts and not enough on enacting rules to govern the nuts and bolts of conducting audits.”

The SEC has modified or delayed PCAOB proposals, reported MarketWatch last week. In one case, they issued a competing proposal on individual auditors signing their name to audits.

“The only people who have openly criticized Doty have been SEC staffers,” Coffee wrote in the New York Law Journal. “Schnurr… seems to have taken the protection of the industry as his priority.”

An overthrow of Doty — stage-managed by SEC staff who influence the decisions of its commissioners — could send the signal that the PCAOB is a Potemkin regulator, unable to carry out its mission of ensuring that auditors do their job and report accounting malfeasance at public companies. Future chairs of PCAOB might not find it worth the effort to fight the Big Four on rule-making, or broker diplomatic deals to expand inspection and enforcement. “The implicit signal from Doty’s replacement,” Coffee says, “would be that the PCAOB should give up on its innovations and stick to its knitting.”

The need for upholding proper accounting standards is urgent. Financial adviser Eleanor Bloxham recently pointed out that Walmart and Toshiba had to retroactively correct their financial statements in the past year, while their auditor, Ernst & Young, did nothing to identify the problem. Unless PCAOB is unleashed to force auditors to maintain accounting standards, Bloxham writes, “financial statements won’t be worth the paper they are printed on.”

Caption: Screen grab of the letter sent to the Securities and Exchange Commission supporting the reappointment of James Doty as chair of the Public Company Accounting Oversight Board.