SEC Touts Inflated Numbers to Look Way Tougher Than It Is

The enforcement numbers the SEC cites are “deeply flawed,” according to a new study, which reveals double- and even triple-counting. Faced with unrelenting criticism from financial reform groups for failing to enforce the securities laws, SEC Chair Mary Jo White has defended herself with numbers.

The Securities and Exchange Commission recorded 755 different enforcement actions yielding $4.1 billion in monetary penalties in 2014, she boasted in a speech this February — “the highest number of cases in the history of the Commission.”

But the numbers she cited were “deeply flawed,” according to a study that will soon be published in the Cornell Law Review. The commission’s methodology allows for double- and even triple-counting some offenders — along with counting fines ordered by other agencies, and penalties that are never collected.

If you weed out the systematic over-counting and artificial boosts, the SEC’s enforcement levels have not significantly changed since 2002, despite the multitude of lawbreaking that led to the 2008 financial crisis, according to the study. “Inflated statistics … suggest that the SEC is a much more serious enforcer in the financial industry than it really is,” writes Urska Velikonja, an assistant professor at Emory University School of Law and the author of the report. Velikonja said that she is scheduled to meet with SEC Enforcement Director Andrew Ceresney this week.

“That a government agency charged with insuring the integrity of corporate reporting should fudge its own numbers is troubling,” said Bartlett Naylor, financial policy advocate for Public Citizen.

Velikonja reviewed 9,679 enforcement actions listed in SEC annual reports from 2000 to 2014, a near-equal split between Democratic and Republican control. And the same tricks were used year after year to show more enforcement, against more defendants, ordering larger monetary penalties.

For example, the SEC includes in its enforcement statistics what Velikonja calls “follow-on” actions, such as barring offenders from various professional associations, or revoking registrations of broker-dealers or investment advisers, or preventing individuals from appearing as an attorney or auditor before the SEC. These follow-on actions are all based on a “primary enforcement action against the same offender based on the same set of facts,” Velikonja writes. Yet they are counted separately.

The SEC, for instance, followed a civil action against Robert A. Gist in 2013 for defrauding clients of $5.4 million with an associational bar and a suspension of Gist’s ability to practice law before the SEC. All three of these actions are counted in the SEC’s 2013 tally.

This double- and triple-counting boosts the overall enforcement total from 2000 to 2014 by 23 to 34 percent.

Similarly, when the SEC brings the same action before a federal court and an internal administrative law judge, it counts both actions. When an initial proceeding is discontinued for the failure to serve the complaint, it’s still counted. When the SEC brings contempt proceedings against individuals for failing to comply with prior enforcement actions, like failing to pay fines, they are also counted separately.

Velikonja also criticizes the inclusion of delinquent filing cases in the enforcement numbers. When a public company misses a deadline to supply the SEC with financial statements, that can lead to “pump-and-dump” schemes, where investors hype up worthless investments to make a profit. But these are easy cases to bring, usually resolved by default. They are not an indicator of heightened enforcement.

If follow-on, contempt proceedings and delinquent filing cases are subtracted, the overall tallies show that enforcement is at about 2002 levels, Velikonja said. 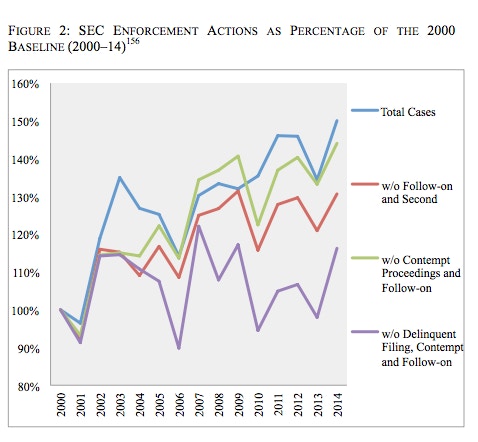 Kurt Walters of the progressive group Rootstrikers, which has been at the vanguard of the movement confronting the SEC, condemned the commission’s effort to use misleading enforcement statistics as evidence of its untrustworthiness. “The next time we hear them tout a record number of cases, we should all have an eyebrow raised.”

The monetary penalties the SEC touts are similarly flawed, Velikonja found. The commission sometimes includes civil fines ordered by other agencies, like the Department of Justice, if they’re based off an enforcement order the SEC brought. They include monies waived due to the inability to pay, or rescinded in light of criminal penalties that take precedence. The SEC also routinely fails to collect its monetary penalties: In 2014 it levied $4.17 billion in penalties, but only collected $2.1 billion.

A 1993 law, the Government Performance & Results Act, requires federal agencies to set performance goals, like a private-sector business. While ensuring efficiency and eliminating government waste is a noble goal, this puts agencies under considerable pressure to fudge numbers every year, under threat of losing funds.

“We don’t have good metrics” to judge the actual work of federal agencies, Velikonja said in an interview. “One of the performance indicators is how many seminars did the SEC hold in the last year. Is this telling us something useful?”

Velikonja recommended decoupling performance metrics from the budgeting process, standardizing reporting across all agencies, and giving the public access to information so more studies like hers can be conducted. Most of all, she said, she thinks the SEC shouldn’t measure its own performance.

In a statement to Reuters, SEC enforcement chief Ceresney said, “We have consistently and transparently reported our enforcement numbers for years, but as we have emphasized, first and foremost is the quality of our cases, which span the securities industry, include first-of-their kind actions, aggressive use of industry and other types of bars, and demonstrate successful pursuit of wrongdoers.” The SEC’s next enforcement statistics report, timed with the end of the fiscal year, will be released sometime in October.

Velikonja sent copies of the report to all five SEC commissioners, but the only two who responded substantively were Daniel Gallagher and Luis Aguilar, who both thanked her for raising important issues and promised to get back to her with detailed comments. But this isn’t likely to have much of an effect; Gallagher and Aguilar have announced their resignation from the agency.