A Short History of U.S. Bombing of Civilian Facilities

What’s unusual about the Kunduz hospital bombing is not that it happened but that it happened to a prominent European organization. In recent times, the U.S. military has bombed a number of civilian facilities. On October 3, a U.S. AC-130 gunship attacked a hospital run by Médecins Sans Frontières in Kunduz, Afghanistan, partially destroying it. Twelve staff members and 10 patients, including three children, were killed, and 37 people were injured. According to MSF, the U.S. had previously been informed of the hospital’s precise location, and the attack continued for 30 minutes after staff members desperately called the U.S. military.

The U.S. first claimed the hospital had been “collateral damage” in an airstrike aimed at “individuals” elsewhere who were “threatening the force.” Since then, various vague and contradictory explanations have been offered by the U.S. and Afghan governments, both of which promise to investigate the bombing. MSF has called the attack a war crime and demanded an independent investigation by a commission set up under the Geneva Conventions.

While the international outcry has been significant, history suggests this is less because of what happened and more because of whom it happened to. The U.S. has repeatedly attacked civilian facilities in the past but the targets have generally not been affiliated with a European, Nobel Peace Prize-winning humanitarian organization such as MSF.

Below is a sampling of such incidents since the 1991 Gulf War. If you believe some significant examples are missing, please send them our way. To be clear, we’re looking for U.S. attacks on specifically civilian facilities, such as hospitals or schools. 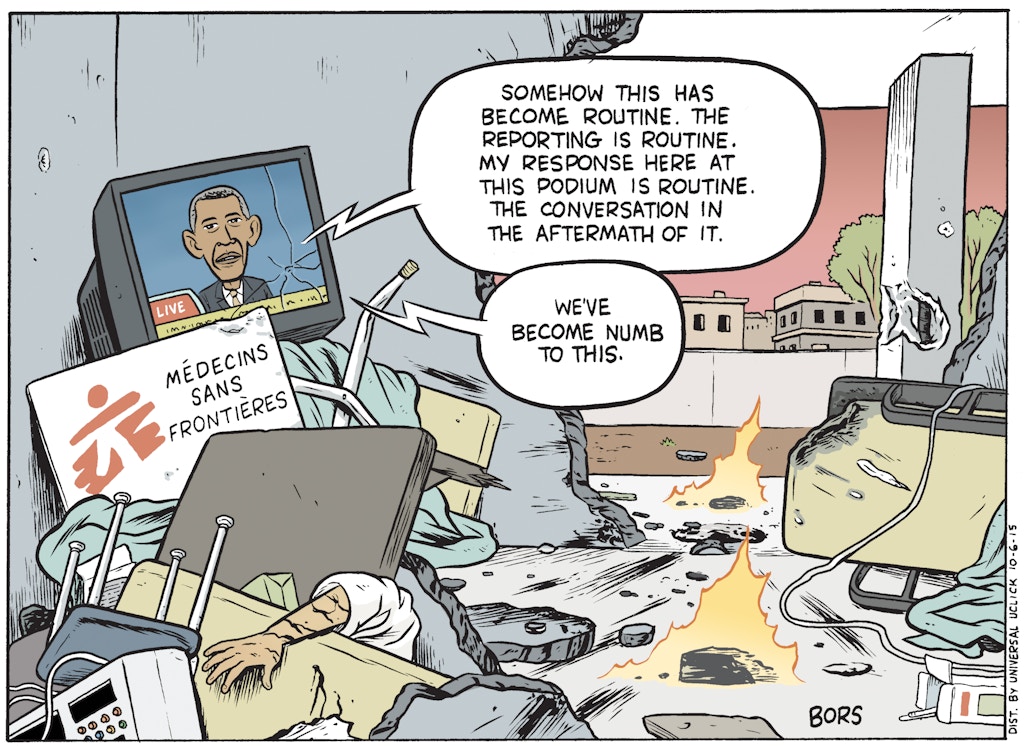 On the seventh day of Operation Desert Storm, aimed at evicting Iraq military forces from Kuwait, the U.S.-led coalition bombed the Infant Formula Production Plant in the Abu Ghraib suburb of Baghdad. Iraq declared that the factory was exactly what its name said, but the administration of President George H.W. Bush claimed it was “a production facility for biological weapons.” Colin Powell, then chairman of the Joint Chiefs of Staff, chimed in to say, “It is not an infant formula factory. It was a biological weapons facility — of that we are sure.” The U.S. media chortled about Iraq’s clumsy, transparent propaganda, and CNN’s Peter Arnett was attacked by U.S. politicians for touring the damaged factory and reporting that “whatever else it did, it did produce infant formula.”

Iraq was telling the truth. When Saddam Hussein’s son-in-law, Hussein Kamel, defected to Jordan in 1995, he had every incentive to undermine Saddam, since he hoped the U.S. would help install him as his father-in-law’s successor — but he told CNN “there is nothing military about that place. … It only produced baby milk.” The CIA’s own investigation later concluded the site had been bombed “in the mistaken belief that it was a key BW [Biological Weapon] facility.” The original U.S. claims have nevertheless proven impossible to stamp out. The George W. Bush administration, making the case for invading Iraq in 2003, portrayed the factory as a symbol of Iraqi deceit. When the Newseum opened in 2008, it included Arnett’s 1991 reporting in a section devoted to — in the New York Times’ description — “examples of distortions that mar the profession.”

The U.S. purposefully targeted an air raid shelter near the Baghdad airport with two 2,000-pound laser-guided bombs, which punched through 10 feet of concrete and killed at least 408 Iraqi civilians. A BBC journalist reported that “we saw the charred and mutilated remains. … They were piled onto the back of a truck; many were barely recognizable as human.” Meanwhile, Army Lt. Gen. Thomas Kelly of the U.S. Joint Chiefs of Staff said: “We are chagrined if [civilian] people were hurt, but the only information we have about people being hurt is coming out of the controlled press in Baghdad.” Another U.S. general claimed the shelter was “an active command-and-control structure,” while anonymous officials said military trucks and limousines for Iraq’s senior leadership had been seen at the building.

In his 1995 CNN interview, Hussein Kamel said, “There was no leadership there. There was a transmission apparatus for the Iraqi intelligence, but the allies had the ability to monitor that apparatus and knew that it was not important.” The Iraqi blogger Riverbend later wrote that several years after the attack, she went to the shelter and met a “small, slight woman” who now lived in the shelter and gave visitors unofficial tours. Eight of her nine children had been killed in the bombing.

After al Qaeda attacks on U.S. embassies in Kenya and Tanzania in 1998, the Clinton administration targeted the Al Shifa factory with 13 cruise missiles, killing one person and wounding 11. According to President Bill Clinton, the plant was “associated with the bin Laden network” and was “involved in the production of materials for chemical weapons.”

The Clinton administration never produced any convincing evidence that this was true. By 2005, the best the U.S. could do was say, as the New York Times characterized it, that it had not “ruled out the possibility” that the original claims were right. The long-term damage to Sudan was enormous. Jonathan Belke of the Near East Foundation pointed out a year after the bombing that the plant had produced “90 percent of Sudan’s major pharmaceutical products” and contended that due to its destruction “tens of thousands of people — many of them children — have suffered and died from malaria, tuberculosis, and other treatable diseases.” Sudan has repeatedly requested a U.N. investigation of the bombing, with no success.

During the U.S.-led bombing of Serbia during the Kosovo war, an F-15E fighter jet fired two remotely-guided missiles that hit a train crossing a bridge near Grdelica, killing at least 14 civilians. Gen. Wesley Clark, then Supreme Allied Commander Europe, called it “an unfortunate incident we all regret.” While the F-15 crew was able to control the missiles after they were launched, NATO released footage taken from the plane to demonstrate how quickly the train was moving and how little time the jet’s crew had to react. The German newspaper Frankfurter Rundschau later reported that the video had been sped up three times. The paper quoted a U.S. Air Force spokesperson who said this was accidental, and they had not noticed this until months later — by which point “we did not deem it useful to go public with this.”

Sixteen employees of Serbia’s state broadcasting system were killed during the Kosovo War when NATO intentionally targeted its headquarters in Belgrade. President Clinton gave an underwhelming defense of the bombing: “Our military leaders at NATO believe … that the Serb television is an essential instrument of Mr. Milosevic’s command and control. … It is not, in a conventional sense, therefore, a media outlet. That was a decision they made, and I did not reverse it.” U.S. envoy Richard Holbrooke told the Overseas Press Club immediately after the attack that it was “an enormously important and, I think, positive development.” Amnesty International later stated it was “a deliberate attack on a civilian object and as such constitutes a war crime.”

Also during the Kosovo war, the U.S. bombed the Chinese embassy in Serbia’s capital, killing three staff and wounding more than 20. The defense secretary at the time, William Cohen, said it was a terrible mistake: “One of our planes attacked the wrong target because the bombing instructions were based on an outdated map.” The Observer newspaper in the U.K. later reported the U.S. had in fact deliberately targeted the embassy “after discovering it was being used to transmit Yugoslav army communications.” The Observer quoted “a source in the U.S. National Imagery and Mapping Agency” calling Cohen’s version of events “a damned lie.” Prodded by the media watchdog organization Fairness and Accuracy in Reporting, the New York Times produced its own investigation finding “no evidence that the bombing of the embassy had been a deliberate act,” but rather that it had been caused by a “bizarre chain of missteps.” The article concluded by quoting Porter Goss, then chairman of the House Intelligence Committee, as saying he believed the bombing was not deliberate – “unless some people are lying to me.”

At the beginning of the U.S-led invasion of Afghanistan, the U.S. attacked the complex housing the International Committee of the Red Cross in Kabul. In an attempt to prevent such incidents in the future, the U.S. conducted detailed discussions with the Red Cross about the location of all of its installations in the country. Then the U.S. bombed the same complex again. The second attack destroyed warehouses containing tons of food and supplies for refugees. “Whoever is responsible will have to come to Geneva for a formal explanation,” said a Red Cross spokesperson. “Firing, shooting, bombing, a warehouse clearly marked with the Red Cross emblem is a very serious incident. … Now we’ve got 55,000 people without that food or blankets, with nothing at all.”

Several weeks after the Red Cross attacks, the U.S. bombed the Kabul bureau of Al Jazeera, destroying it and damaging the nearby office of the BBC. Al Jazeera’s managing director said the channel had repeatedly informed the U.S. military of its office’s location.

Soon after the start of the U.S.-led invasion of Iraq, the U.S. bombed the Baghdad office of Al Jazeera, killing reporter Tarek Ayoub and injuring another journalist. David Blunkett, the British home secretary at the time, subsequently revealed that a few weeks before the attack he had urged Prime Minister Tony Blair to bomb Al Jazeera’s transmitter in Baghdad. Blunkett argued, “I don’t think that there are targets in a war that you can rule out because you don’t actually have military personnel inside them if they are attempting to win a propaganda battle on behalf of your enemy.”

In 2005, the British newspaper The Mirror reported on a British government memorandum recording an April 16, 2004, conversation between Blair and President Bush at the height of the U.S. assault on Fallujah in Iraq. The Bush administration was infuriated by Al Jazeera’s coverage of Fallujah, and according to The Mirror, Bush had wanted to bomb the channel at its Qatar headquarters and elsewhere. However, the article says, Blair argued him out of it. Blair subsequently called The Mirror’s claims a “conspiracy theory.” Meanwhile, his attorney general threatened to use the Official Secrets Act to prosecute any news outlet that published further information about the memo, and, in a secret trial, did in fact prosecute and send to jail a civil servant for leaking it.

The same day as the 2003 bombing of the Al Jazeera office in Baghdad, a U.S. tank fired a shell at the 15th floor of the Palestine Hotel, where most foreign journalists were then staying. Two reporters were killed: Taras Protsyuk, a cameraman for Reuters, and Jose Couso, a cameraman for the Spanish network Telecinco. An investigation by the Committee to Protect Journalists concluded that the attack, “while not deliberate, was avoidable.”

This story has been updated to include the April 8, 2003, attack on the Palestine Hotel in Baghdad.