Aamer’s release concludes a long legal ordeal that raised the ire of human rights groups around the world. Despite spending nearly a decade and a half in U.S. custody, Aamer was never charged with any crime, and was cleared for release on separate occasions in both 2007 and 2009. 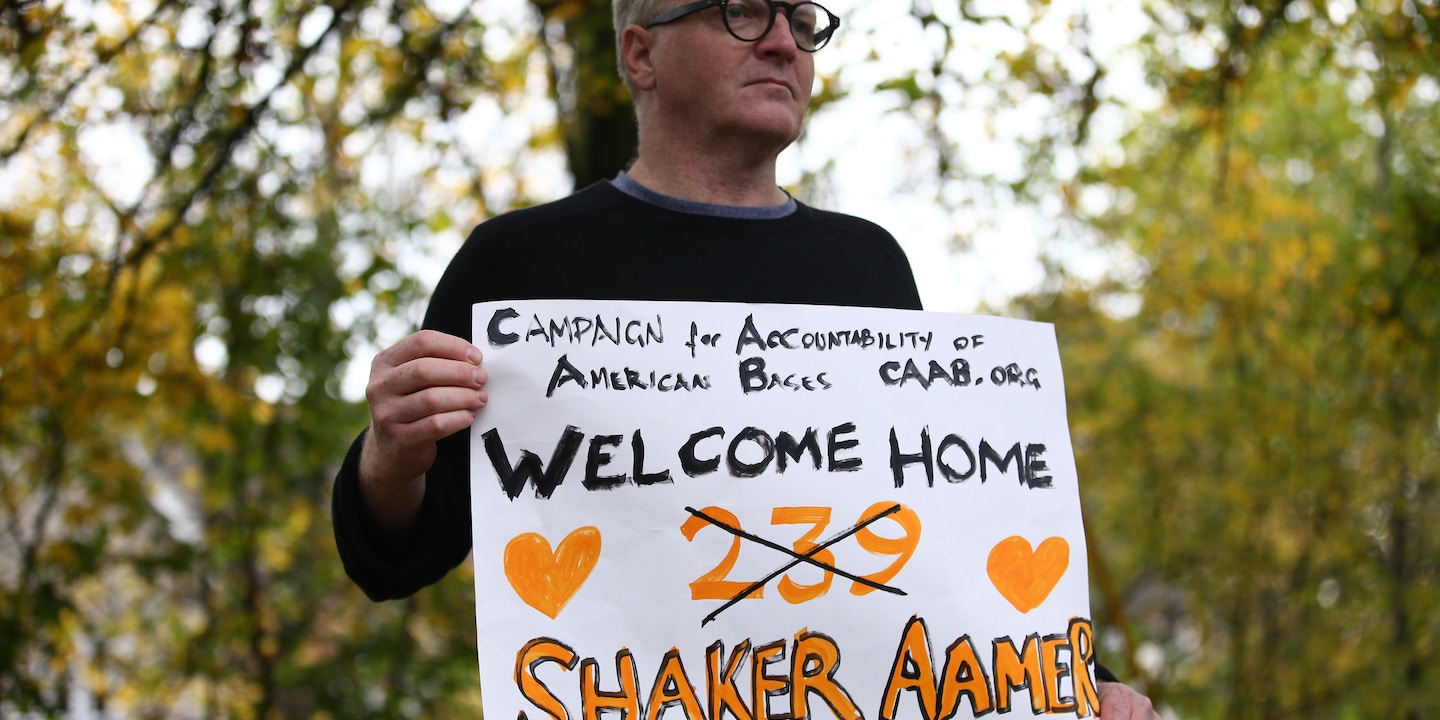 ALMOST 14 YEARS after he was first detained by U.S. forces in Afghanistan, Shaker Aamer, the last British detainee held at Guantánamo Bay, was released from the prison today and repatriated back to his home in England. In a statement issued by a spokesperson for British Prime Minister David Cameron, the government indicated that it had no plans to detain him upon his release, and that “he is free to be reunited with his family.”

Aamer’s release today concludes a long legal ordeal that had raised the ire of human rights groups around the world. Despite spending nearly a decade and a half in U.S. custody, Aamer was never charged with any crime, and was cleared for release from the prison on separate occasions in both 2007 and 2009. In a statement issued today through the prisoner advocacy organization CAGE, Moazzam Begg, another former British detainee at Guantánamo and a longtime friend of Aamer, said, “The day has finally arrived. … [Aamer’s] family, friends, lawyers, campaigners and well-wishers have fought a battle to free an innocent man and finally, that battle has been won.”

Aamer, 48, is a Saudi citizen and resident of the United Kingdom, whose British-born wife and four children, the youngest of whom he has never met, still live today in London. In 2001, he was among the many Arabs detained in Afghanistan by local bounty hunters following the American invasion of the country, before being rendered into the custody of U.S. troops. The bounty system set up by the American occupation would later be criticized by Amnesty International for effectively creating a market for local opportunists to capture people of Arab descent, brand them as terrorists, and sell them to American forces in exchange for lucrative cash rewards. This system would later be blamed for helping contribute to the imprisonment of hundreds, perhaps thousands, of innocent people who would later be transferred to Guantánamo Bay and other detention sites around the world.

Following his capture in late 2001, Aamer himself would be held for two months at the prison facility at Bagram Air Field, before being transported to Guantánamo Bay. At both sites he alleges that he was subject to torture by American military personnel. In some instances, Aamer has also said that this torture occurred in the presence of agents of the British intelligence service MI5, a politically explosive allegation about the extent of that agency’s complicity in post-9/11 torture.

During the years of his detention, Aamer’s case has become a minor cause célèbre in England, with politicians, celebrities and prominent civil society figures advocating publicly for his release and repatriation. Earlier this month, many such public figures even held a hunger strike on his behalf to help build pressure for his release.

Aamer, who emerged as something of a leader among Guantánamo prisoners during his incarceration, had frequently taken part in such strikes at the prison, despite the deleterious impact it had on his health and mental state. In the midst of one such strike in 2013, Aamer would tell the legal advocacy organization Reprieve, “I am losing my mind, I am losing my health, I am losing my life. They are trying to do as much damage to us as they can before we leave here,” adding that “this is a living death here in Guantánamo, so if I have to risk death for a principle, that is what I want to do.”

Through his lawyers and sympathetic human rights organizations, Aamer, a fluent English speaker, has managed to give eloquent and emotional testimony about the various episodes of mistreatment he has been subject to over the years of his incarceration, including constant beatings and humiliations by prison guards and interrogators, sleep deprivation, exposure to extreme temperatures, shackling in stress positions, and threats to sexually assault his young daughter.

In a 2014 report issued by an independent psychologist who met with Aamer at Guantánamo, he described the effect of some of this mistreatment, saying, “I was not a human being anymore. I meant nothing to them. I lost my dignity, my pride. I had to take off my underwear and hand it to them. I had sleep deprivation for 11 days. That made me crazy. They poured cold water over me. They kept me standing for 20 hours a day. I had to hold my hands and arms out.” In another letter published in part by British newspaper The Independent in 2012, Aamer would plead with captors to “torture me in the old way,” adding that “here they destroy people mentally and physically without leaving marks.”

Among many of his supporters, a widespread belief lingers that part the reason Aamer has remained behind bars so long after being cleared for release is that as an English-speaking resident of a Western country, he would serve as an effective public witness against those responsible for human rights abuses in U.S. detention facilities. In his statement issued today through CAGE, Moazzam Begg alluded to this, saying, “His qualities have been acknowledged by his tormentors, and I’m certain he won’t disappoint when he’s ready to tell his side of the story.”