Netanyahu Has Never Actually Supported a Palestinian State, Despite What He Told Obama

Contrary to statements he made this week in Washington, D.C. to President Obama, Israeli Prime Minister Benjamin Netanyahu has always effectively opposed the creation of a Palestinian state. 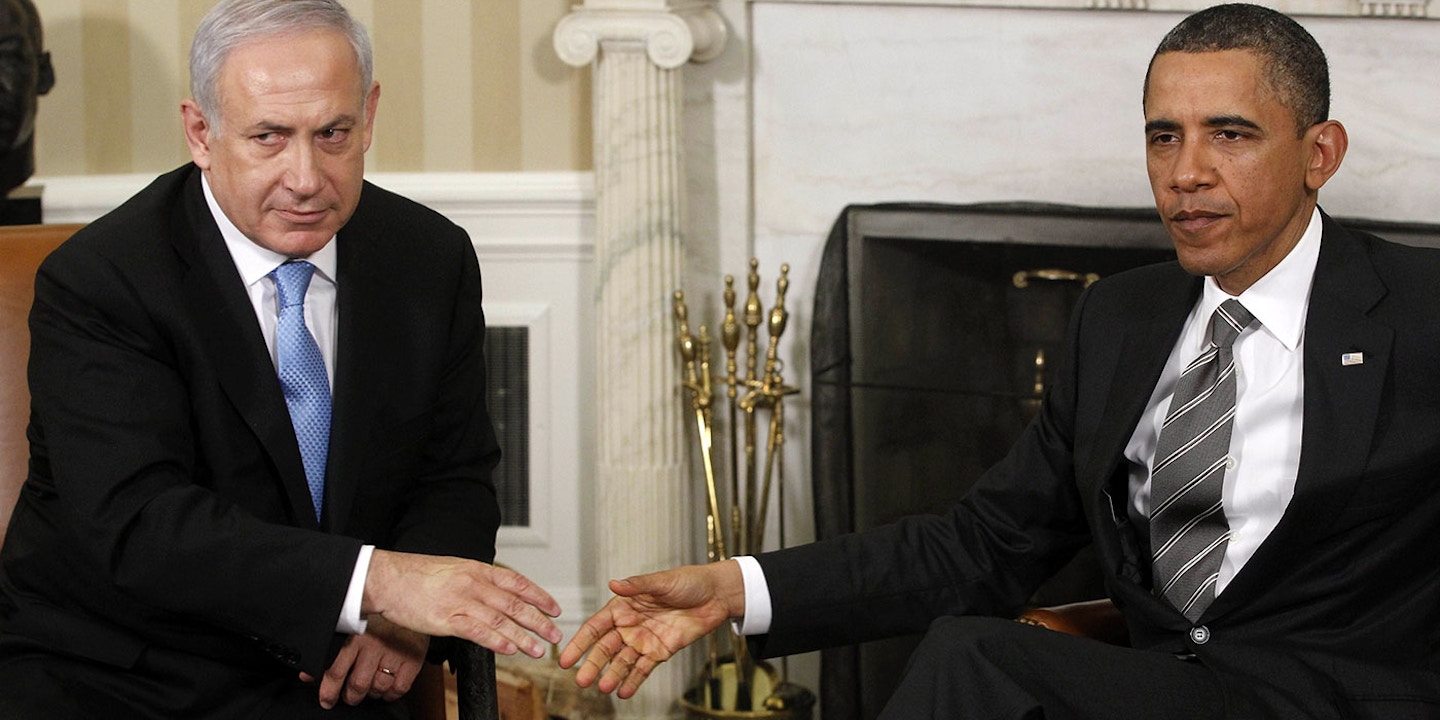 IN A MEETING with President Obama today, Benjamin Netanyahu went through the familiar motions of expressing rhetorical support for a two-state solution to the Israel-Palestine conflict. Stating, “I remain committed to a vision of peace of two states for two peoples,” Netanyahu said that he wanted “make it clear that we have not given up our hope,” for achieving a two-state solution to the conflict. Just a day before this statement, however, the Israeli government took steps to ensure such a vision could never become reality, moving to authorize the construction of an additional 2,200 housing units in the occupied territories in the face of Palestinian opposition.

The reason behind this apparent discrepancy between word and deed is that Netanyahu does not, and has essentially never, supported the creation of an actual Palestinian state. Last year, during the Israeli election, Netanyahu briefly acknowledged this fact himself, explicitly stating to voters that there would not be a Palestinian state during his tenure as prime minister if he was reelected. Despite this, the convenient fiction that the Israeli prime minister supports a “two-state solution” continues to linger in the United States. Why?

In his 2000 book, A Durable Peace, Netanyahu outlined his vision for any future self-governing Palestinian territory, one that bore little resemblance to actual statehood. “Many in the world have blithely accepted the notion that the Palestinians must have their own independent state,” Netanyahu wrote. “When I am asked about a Palestinian state, I answer in the negative.” Instead of statehood, Netanyahu proposed the creation of a “Palestinian entity,” a governing body with some rights of limited self-governance but not full independence.

In a video recorded the year following the release of the book, Netanyahu bragged that during his first term as prime minister, from 1996 to 1999, he had “de facto put an end to the Oslo Accords,” the agreement that had been negotiated with the Palestinians by his predecessor, and which intended to create a Palestinian state alongside Israel.

For many years, this brazen opposition to Palestinian statehood remained Netanyahu’s public position. While he moved on to other pursuits, including helping pitch the Iraq War to the U.S. Congress, his stance on Palestinian self-governance remained more or less static. Indeed, in the absence of any American pressure, a public evolution on this issue was not even necessary.

In 2009, however, that began to change. In June of that year, newly elected President Barack Obama, who had made rebuilding ties with the Muslim world a part of his foreign policy platform, gave a landmark speech in Cairo in which he said the United States “does not accept the legitimacy of continued Israeli settlements,” going on to describe them as contrary to previous agreements and an impediment to peace in the region.

Israeli media would report at the time that Obama’s words “resonated through Jerusalem’s corridors.” In seeming recognition of shifting American sentiments on this issue, 10 days later Netanyahu gave what was billed as a landmark speech at Bar-Ilan University near Tel-Aviv, dealing in part with the subject of Palestinian statehood.

In his address, hailed by the White House as an “important step forward,” Netanyahu endorsed for the first time the creation of what he called “a demilitarized Palestinian state” in the occupied territories. But the same speech added stipulations that, in sum, turned this so-called state into a rebranded version of Netanyahu’s 2000 “Palestinian entity,” with only limited autonomy. In private, just three months before the speech, Netanyahu was even more blunt about the limits he required for a more independent Palestinian territory, stipulating he could only support one “without an army or control over air space and borders,” according to diplomatic cables later released by WikiLeaks.

In a speech two years later to Congress, Netanyahu would go into more detail about the ridiculous conception of Palestinian “statehood” he was imagining, one in which the West Bank would be essentially bifurcated by massive Israeli settlement blocs, the prospective Palestinian capital of East Jerusalem would be surrounded by settlements, and the Israeli Defense Forces would continue to have “a long-term military presence” inside the newly independent “state.” Needless to say, such a proposal was unlikely ever to be accepted by the Palestinians, nor did it bear much resemblance to the independent statehood they had actually been seeking.

Netanyahu let the mask drop even further in July 2014, when he stated in a press conference that “there cannot be a situation, under any agreement, in which we relinquish security control of the territory west of the River Jordan,” essentially outlining a position of permanent military occupation of Palestinian territories. In the run-up to the 2015 election, when he publicly disowned the idea of Palestinian statehood, Netanyahu would specifically repudiate his 2009 Bar-Ilan speech, stating that “there will be no withdrawals and no concessions,” and that the speech was “not relevant.” As recently as last week, Netanyahu told the Knesset Foreign Affairs and Defense Committee that “we need to control all of the territory for the foreseeable future,” before adding darkly that Israel “will forever live by the sword.”

In light of all this, it’s difficult to take seriously Netanyahu’s most recent claim that he supports the creation of a Palestinian state. At best, he has in the past expressed support for a Palestinian “entity” with some features of self-governance (an idea that has well-known historical precedents), but certainly not one that affords genuine independence, freedom or statehood to its inhabitants. At his most brazen, he has denied the possibility of even that limited form of self-determination, stating bluntly that Israel will control the entire West Bank and keep its inhabitants under indefinite military subjugation.

Netanyahu has nonetheless been allowed to maintain a convenient fiction that he supports the negotiated goal of Palestinian self-determination. In reality, he has never really supported it. Thanks in large part to Netanyahu’s leadership, a Palestinian state will likely never emerge. Due to his own obstinance, as well as American indulgence, a binational state or a formalized Apartheid regime have now become the most probable remaining outcomes to this disastrous, decadeslong conflict.