The private-sector industrial prong of the Military and Surveillance State always wins, but especially when the media’s war juices start flowing.

The Paris attacks took place on Friday night. Since then, France’s president has vowed “war” on ISIS and today significantly escalated the country’s bombing campaign in Syria (France has been bombing ISIS in Iraq since last January, and began bombing the group in Syria in September).

Already this morning, as Aaron Cantú noticed, the stocks of the leading weapons manufacturers — what is usually referred to as the “defense industry” — have soared: Also enjoying a fantastic day so far is one of the leading Surveillance State profiteers: 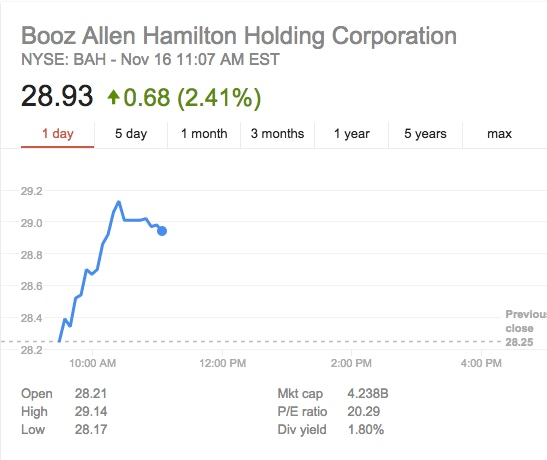 France’s largest arms manufacturer, Thales, is also having an outstanding day, up almost 3 percent, even as the leading French index is down: Note how immediate the increases are: The markets could barely wait to start buying. The Dow overall is up today only .12 percent, making these leaps quite pronounced. Reuters, as published on Fox Business, starkly noted the causal connection: “Shares of aerospace and defense rose sharply on Monday in reaction to the attacks in France.” The private-sector industrial prong of the Military and Surveillance State always wins, but especially when the media’s war juices start flowing.