Why do U.S. officials believe they can get away with blatantly evidence-free assertions to demonize privacy and demand still-greater surveillance?

A truly superb New York Times editorial this morning mercilessly shames the despicable effort by U.S. government officials to shamelessly exploit the Paris attacks to advance long-standing agendas. Focused on the public campaign of the CIA to manipulate post-Paris public emotions to demonize transparency and privacy and to demand still-greater surveillance powers for themselves, the NYT editors begin:

It’s a wretched yet predictable ritual after each new terrorist attack: Certain politicians and government officials waste no time exploiting the tragedy for their own ends. The remarks on Monday by John Brennan, the director of the Central Intelligence Agency, took that to a new and disgraceful low.

The editorial, which you should really read in its entirety, destroys most of the false, exploitative, blame-shifting claims uttered by U.S. officials about these issues. Because intelligence agencies knew of the attackers and received warnings, the NYT editors explain that “the problem in [stopping the Paris attacks] was not a lack of data, but a failure to act on information authorities already had.” They point out that the NSA’s mass surveillance powers to be mildly curbed by post-Snowden reforms are ineffective and, in any event, have not yet stopped. And most importantly, they document that the leader of this lowly campaign, CIA chief John Brennan, has been proven to be an inveterate liar:

It is hard to believe anything Mr. Brennan says. Last year, he bluntly denied that the CIA had illegally hacked into the computers of Senate staff members conducting an investigation into the agency’s detention and torture programs when, in fact, it did. In 2011, when he was President Obama’s top counterterrorism adviser, he claimed that American drone strikes had not killed any civilians, despite clear evidence that they had. And his boss, James Clapper Jr., the director of national intelligence, has admitted lying to the Senate on the NSA’s bulk collection of data. Even putting this lack of credibility aside, it’s not clear what extra powers Mr. Brennan is seeking.

Indeed, what more powers could agencies like the CIA, NSA, MI6 and GCHQ get? They’ve been given everything they’ve demanded for years, no questions asked. They have virtually no limits. Of course it’s “not clear what extra powers Mr. Brennan is seeking.” It’s like trying to buy a Christmas gift for Paris Hilton: what do you give to an omnipotent, terrorism-exploiting agency that already has everything it could ever dream of having?

Space constraints likely required the NYT editors to leave several specific CIA lines of deceit unmentioned. To begin with, there’s literally zero evidence that the Paris attackers used encryption. There are reasons to believe they may not have (siblings and people who live near each other have things called “face-to-face communications”).

Even if they had used encryption (which, just by the way, the U.S. government funds and the GOP protected in the 1990s), that would not mean we should abolish it or give the U.S. government full backdoor access to it — any more than face-to-face plotting means we should allow the government to put monitors in everyone’s homes to prevent this type of “going dark.” Silicon Valley has repeatedly said there’s no way to build the U.S. government a “backdoor” that couldn’t also be used by any other state or stateless organization to invade. And that’s to say nothing of all the lies and false claims that I documented several days ago embedded in the Snowden-is-to-blame-for-Paris trash — a low-life propaganda campaign that is not principally about Snowden but really about scaring Silicon Valley out of offering encryption lest they be viewed as ISIS-helpers.

But there’s one vital question the NYT editors do not address: Why do the CIA and other U.S. government factions believe — accurately — that they can get away with such blatant misleading and lying? The answer is clear: because, particularly after a terror attack, large parts of the U.S. media treat U.S. intelligence and military officials with the reverence usually reserved for cult leaders, whereby their every utterance is treated as Gospel, no dissent or contradiction is aired, zero evidence is required to mindlessly swallow their decrees, anonymity is often provided to shield them from accountability, and every official assertion is equated with Truth, no matter how dubious, speculative, evidence-free, or self-serving.

Like many people, I’ve spent years writing about the damage done by how subservient and reverent many U.S. media outlets are toward the government officials they pretend to scrutinize. But not since 2003 have I witnessed anything as supine and uncritical as the CIA-worshipping stenography that has been puked forward this week. Even before the Paris attacks were concluded, a huge portion of the press corps knelt in front of the nearest official with medals on their chest or who flashes covert status, and they’ve stayed in that pitiful position ever since.

The leading cable news networks, when they haven’t been spewing outright bigotry and fearmongering, have hosted one general and CIA official after the next to say whatever they want without the slightest challenge. Print journalists, without the excuse of the pressures of live TV, have been even worse: Article after article after article does literally nothing other than uncritically print the extremely dubious claims of military and intelligence officials without including any questioning, contradiction, dissenters, or evidence that negates those claims. 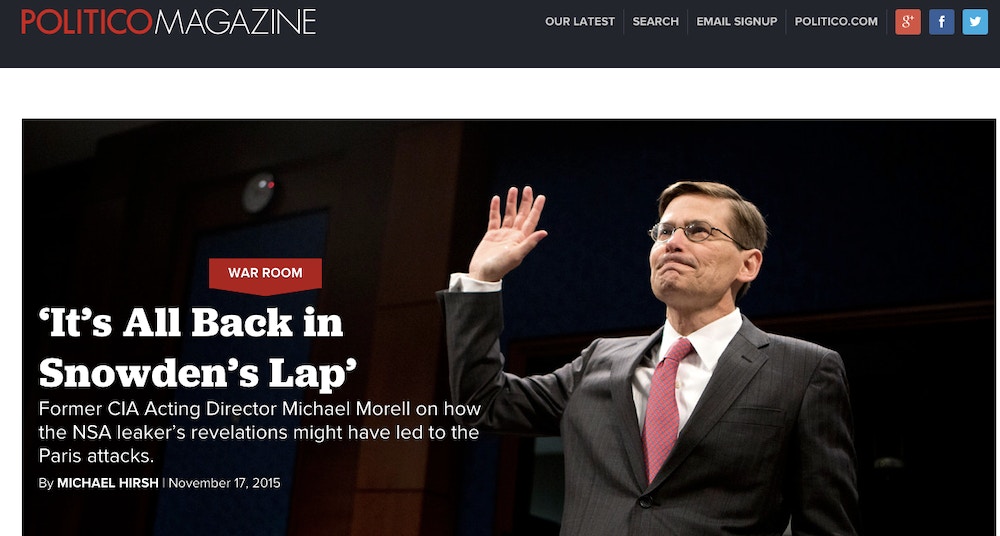 None of the facts the NYT pointed to this morning to show Brennan is lying and misleading are esoteric or obscure. They’re all right out in the public domain. Countless other people have raised them. But so many journalists steadfastly exclude all of that from their “reporting.” Especially after a terror attack, the already sky-high journalistic worship of security officials skyrockets. Many journalists are in pure servant-stenography mode, not reporting and definitely not questioning claims that emanate from the sacred mouths of these Pentagon and CIA priests. Just look at the reports I cited to see how extreme this obsequious behavior is. What can excuse “reporting” like this?

This, of course, is how propaganda is cemented: not by government officials making dubious, self-serving claims (they’ll always be motivated to do that), but by people who play the role of “journalist” on TV and in print acting as their spokespeople, literally suppressing all the reasons why the officials’ claims are so questionable if not outright false.

Kudos to the NYT editors for pulling no punches this morning in making all this deceit manifest. But the real culprits aren’t the government officials spewing this manipulative tripe but the journalists who not only let them get away with it but, so much worse, eagerly help.