With Joe Biden’s praise for Dick Cheney at the unveiling of his Capitol “bust,” the U.S. government signals to the world that it regards itself as exempt from the laws of wars, the Nuremberg prohibition against aggressive invasions, and global prohibitions on torture.

As vice president, Dick Cheney was a prime architect of the worldwide torture regime implemented by the U.S. government (which extended far beyond waterboarding), as well as the invasion and destruction of Iraq, which caused the deaths of at least 500,000 people and more likely over a million. As such, he is one of the planet’s most notorious war criminals.

President Obama made the decision in early 2009 to block the Justice Department from criminally investigating and prosecuting Cheney and his fellow torturers, as well as to protect them from foreign investigations and even civil liability sought by torture victims. Obama did that notwithstanding a campaign decree that even top Bush officials are subject to the rule of law and, more importantly, notwithstanding a treaty signed in 1984 by Ronald Reagan requiring that all signatory states criminally prosecute their own torturers. Obama’s immunizing Bush-era torturers converted torture from a global taboo and decades-old crime into a reasonable, debatable policy question, which is why so many GOP candidates are now openly suggesting its use. 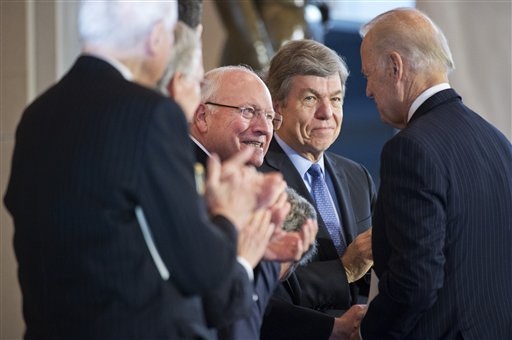 But now, the Obama administration has moved from legally protecting Bush-era war criminals to honoring and gushing over them in public. Yesterday, the House of Representatives unveiled a marble bust of former Vice President Cheney, which — until a person of conscience vandalizes or destroys it — will reside in Emancipation Hall of the U.S. Capitol.

At the unveiling ceremony, Cheney was, in the playful words of NPR, “lightly roasted” — as though he’s some sort of grumpy though beloved avuncular stand-up comic. Along with George W. Bush, one of the speakers in attendance was Vice President Joe Biden, who spoke movingly of Cheney’s kind and generous soul:

As I look around this room and up on the platform, I want to say thank you for letting me crash your family reunion. I’m afraid I’ve blown his cover. I actually like Dick Cheney. … I can say without fear of contradiction, there’s never one single time been a harsh word, not one single time in our entire relationship.

Leading American news outlets got in on the fun, as they always do, using the joviality of the event to promote their news accounts and generate visits to their sites:

As NPR put it, “This was not an event for Cheney critics — on the war or torture or related topics.” Totally: why let some unpleasant war criminality ruin a perfectly uplifting ceremony?

It is a long-standing trope among self-flattering Westerners and their allies that a key difference between “us” and “them” (Muslim radicals) is that “they” honor and memorialize their terrorists and celebrate them as “martyrs” while we scorn and prosecute our own.

Yesterday, the U.S. government unambiguously signaled to the world that not only does it regard itself as entirely exempt from the laws of wars, the principal Nuremberg prohibition against aggressive invasions, and global prohibitions on torture (something that has been self-evident for many years), but believes that the official perpetrators should be honored and memorialized provided they engage in these crimes on behalf of the U.S. government. That’s a message that most of the U.S. media and thus large parts of the American population will not hear, but much of the world will hear it quite loudly and clearly. How could they not?

In other news, U.S. officials this week conceded that a man kept in a cage for 13 years at Guantánamo, the now 37-year-old Mustafa al-Aziz al-Shamiri, was there due to “mistaken identity.” As Joe Biden said yesterday, “I actually like Dick Cheney.”