Amid outcry over police brutality and the announcement of a DOJ probe into officers’ use of force, Chicago officials released two more videos showing the killing or mistreatment of black men by law enforcement. 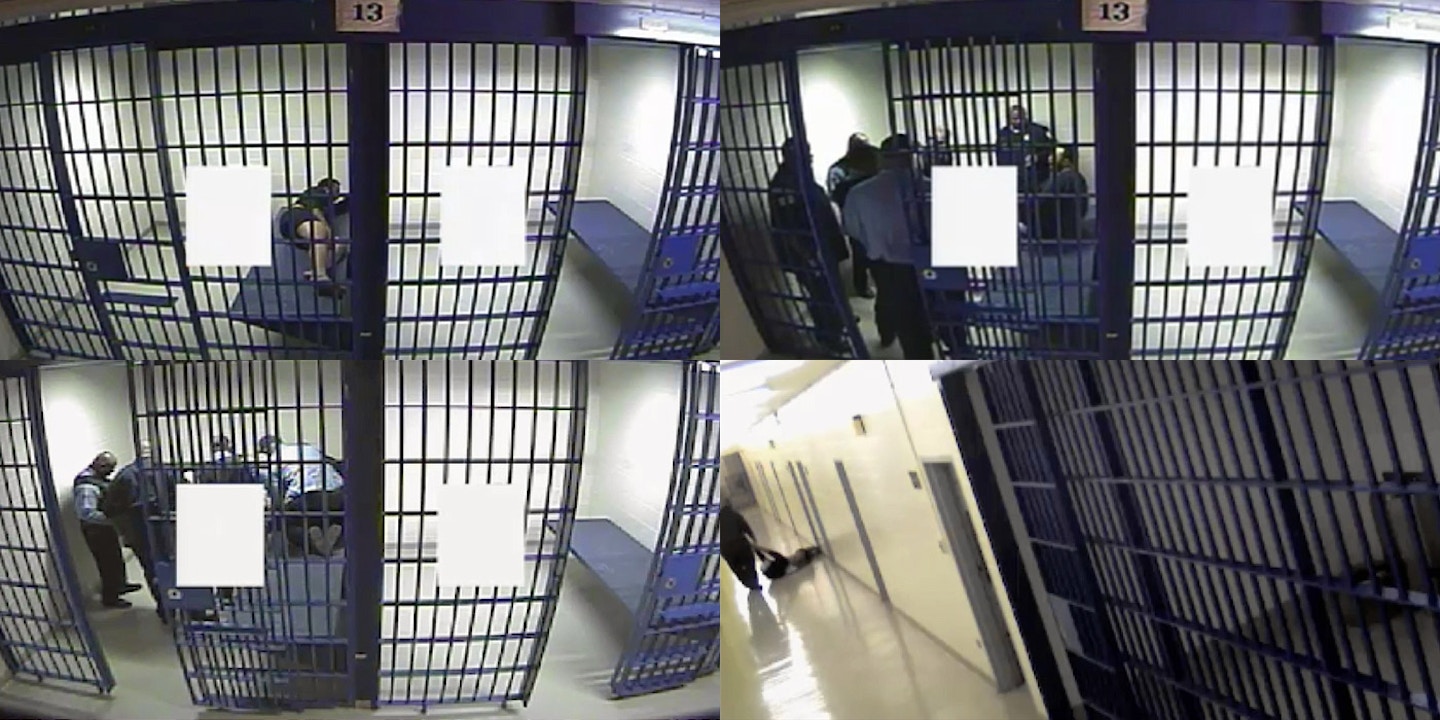 Correction: February 2, 2016
An earlier version of this story included a quote attributed to a Chicago-based activist named Jasson Perez. It read, “If people thought the Ferguson municipality was corrupt, wait until they see Chicago.” Perez told The Intercept that he had never been interviewed by our reporter.

The Intercept could not confirm whether or not the reporter spoke with Percy Coleman, who was misidentified as a former Chicago Housing Authority police chief; he was actually a Chicago Housing Authority community police commander. Coleman said he spoke to a number of reporters at the time this story was published. He does not specifically recall being interviewed by our reporter, but he requested some changes to the wording of his quotes, which have been made.

The problems with this story reflect a pattern of misattributed quotes that The Intercept uncovered in stories written by Juan Thompson, a former staff reporter. The rest of the quotes were confirmed. We apologize to our readers.

ON MONDAY, AMID PUBLIC OUTCRY in Chicago over police brutality and the announcement of a Justice Department probe into officers’ use of force, city officials released two more videos showing the killing or mistreatment of black men by law enforcement.

The latest footage, from 2012, shows officers in a Chicago jail using a Taser against 38-year-old Philip Coleman, then dragging his limp body out of his cell and down the hallway. Coleman later died in police custody.

According to Coleman’s father, Percy, his son experienced a mental health crisis when he visited his parents’ home on Chicago’s Far South Side in December 2012. Coleman, a graduate of the University of Chicago, was seeking his parents’ advice, his father said. Percy confirmed reports in the Chicago Tribune that the younger Coleman was “upset about losing out on a job opportunity and mounting financial pressure,” and “prayed together for hours” with his mother before he “suddenly snapped.”

When officers arrived, they transported Coleman to a jail in the city’s Calumet District. “I was expecting the police to help him, not kill him,” said Percy, himself a former Chicago Housing Authority community police commander.

The newly released video shows Coleman alone on a bed in jail cell. Six officers enter, and a conversation ensues. Coleman appears to stand, and then is shocked with a Taser and overcome by officers, who pull his body across the floor out of the cell. Police claimed Coleman was being combative, but the footage challenges that assertion.

Coleman was taken to the hospital, where he was shocked again, officers claimed, because he was threatening and they feared for their physical safety. Coleman died at the hospital later that night.

According to the Chicago Sun-Times, “The Cook County medical examiner’s office determined he died accidentally after the hospital gave him a sedative.” But as the Tribune noted, “An autopsy showed that Coleman had experienced severe trauma, including more than 50 bruises and scrapes on his body from the top of his head to his lower legs.” Percy Coleman says the family has filed a lawsuit against the city for the death of their son. “I’m a former law enforcement official, and I know what happened to my son is wrong,” he told me. “I will get justice. The gangs here on the South Side are no different from the police. They both think they can kill anybody anytime.”

The video Coleman’s treatment, released late in the day on Monday, has intensified scrutiny of the city’s handling of excessive violence by police. Since the release in late November of dashcam footage showing the killing of 17-year-old Laquan McDonald, shot 16 times by police officer Jason Van Dyke, activists have staged persistent demonstrations to call attention to what they see as a uniquely corrupt political and law enforcement establishment.

The Justice Department investigation announced Monday will examine the Chicago Police Department’s use of deadly force, allegations of racism against the department, and procedures for police accountability. Chicago’s embattled mayor, Rahm Emanuel, who initially opposed the federal inquiry, now says he welcomes it.

Last week, Emanuel fired Police Superintendent Garry McCarthy, who served for four years as the windy city’s top cop, and on Sunday, the head of Chicago’s Independent Police Review Authority resigned. Many see the changes as an effort to stem public criticism of the city’s management of police killing cases, especially in the run-up to Emanuel’s reelection. For months, the city refused to release the video of McDonald’s October 2014 shooting, captured by a police cruiser’s dashcam. But two weeks ago, under court order, Emanuel’s office finally relented and made the graphic video public.

In the video, Officer Van Dyke, who was on the scene for less than 30 seconds before he began firing, can be seen unloading his pistol in McDonald’s body. Officers claimed that McDonald, who was carrying a knife, had lunged in a threatening manner, but the video shows no such thing.

Just hours before the McDonald video was released, Cook County State’s Attorney Anita Alvarez charged Van Dyke with first-degree murder. It was the first time in over three decades that a Chicago police officer had received such a charge for an act carried out while on duty.

“It isn’t a matter of tension between poor black people and police,” said Veronica Morris-Moore, an activist and organizer with the community group Fearless Leading by the Youth, or FLY. “It’s that slave patrol legacy of brutality and terror that defines the relationship between modern day cops and black communities.”

The Chicago Police Department has an extensive and troubling legacy of violence. Over the last five years, Chicago officers have fatally shot 70 people, more than any other big-city police department in the U.S., according to the Better Government Association, a watchdog group in Illinois. “The Chicago victims were nearly all male,” wrote the BGA’s Andrew Schroedter. “Most were black. More than half of the killings occurred in six South Side police districts.”

Earlier this year, an investigation by The Guardian uncovered a so-called black site, Homan Square, where police tortured multiple black Chicagoans. And in May, Chicago became the first city in the country  to create a reparations fund for victims of police torture, earmarking $5.5 million for victims of former police commander Jon Burge, who ran a gang within the department that inflicted tactics including electrocuting the testicles of men in custody, and cutting off their oxygen flow with plastic bags.

Considering the overwhelming record of abuse, many protestors remain dissatisfied with the dismissal of a few figures within the law enforcement apparatus, and are pushing for the resignation of Alvarez, the city’s top prosecutor. On Monday, Alvarez announced that her office would not press charges in the fatal shooting of 25-year-old Ronald Johnson, who was killed by police officer George Hernandez in October 2014, eight days before McDonald’s death. Airing footage the city also fought to keep under wraps, prior to the court order in the McDonald case, Alvarez said the shooting was justified because Johnson had been armed with a gun and matched the description of a suspect. The lawyer for Johnson’s family has disputed the weapons claim. “The dashcam video of Johnson’s shooting does not conclusively show him holding a pistol,” the Tribune reported, “but Alvarez said she believes an object in his hand appears to be a gun.”

Alvarez has been defensive of police conduct in the past. During a cringeworthy 2012 interview on 60 Minutes — the segment was titled “Chicago: The false confession capital” — Alvarez stood by police in two infamous cases in which black men were coerced into giving false testimony and convicted of crimes they didn’t commit.

In one case, Chicago prosecutors charged five black men, known as the Dixmoor Five, for the sexual assault and murder of a young girl. In 2011, a DNA test confirmed that semen on the victim matched a separate man — a convicted rapist. The men were eventually freed and received a $40 million settlement, the largest in Illinois history. But on 60 Minutes, Alvarez seemed convinced of their guilt; when asked to account for the DNA evidence, she implied that necrophilia might be one explanation. “It’s possible. We have seen cases like that,” Alvarez said.

Along with protestors, some political figures have joined in questioning Alvarez’s ability to hold law enforcement accountable.

Cook County Board President Toni Preckwinkle, Commissioner Jesus Garcia, and U.S. Congressman Luis Gutierrez — who recently endorsed Alvarez for reelection — have all turned against her. Preckwinkle and Garcia explicitly called for her resignation, while Gutierrez withdrew his support.

In a letter to Alvarez obtained by the Sun-Times, Gutierrez wrote, “Laquan McDonald deserved justice: not last week, but 13 months ago. You failed in this regard. The delay was inexcusable. I am not calling for your resignation. An election will be held soon enough. I will not be voting for you next March.”

Morris-Moore, the FLY activist and organizer — who successfully fought for an adult hospital trauma center on Chicago’s majority black South Side, which has the city’s highest homicide rates — is seeking an even more groundbreaking overhaul.

“Rahm Emanuel,” Morris-Moore said, “continues to privatize public mental health services, public education, and more significant resources for black communities, all while dishing out millions in police-related settlements and consistently increasing the police budget that currently makes up 40 percent of the city’s budget.”

“That is why black lives matter,” Morris-Moore said. “Because black people deserve policies and decision-making that respect our dignity and humanity.”