Civil rights organizations say this is the latest in a long string of incidents targeting pro-Palestinian speech on college campuses across the U.S. 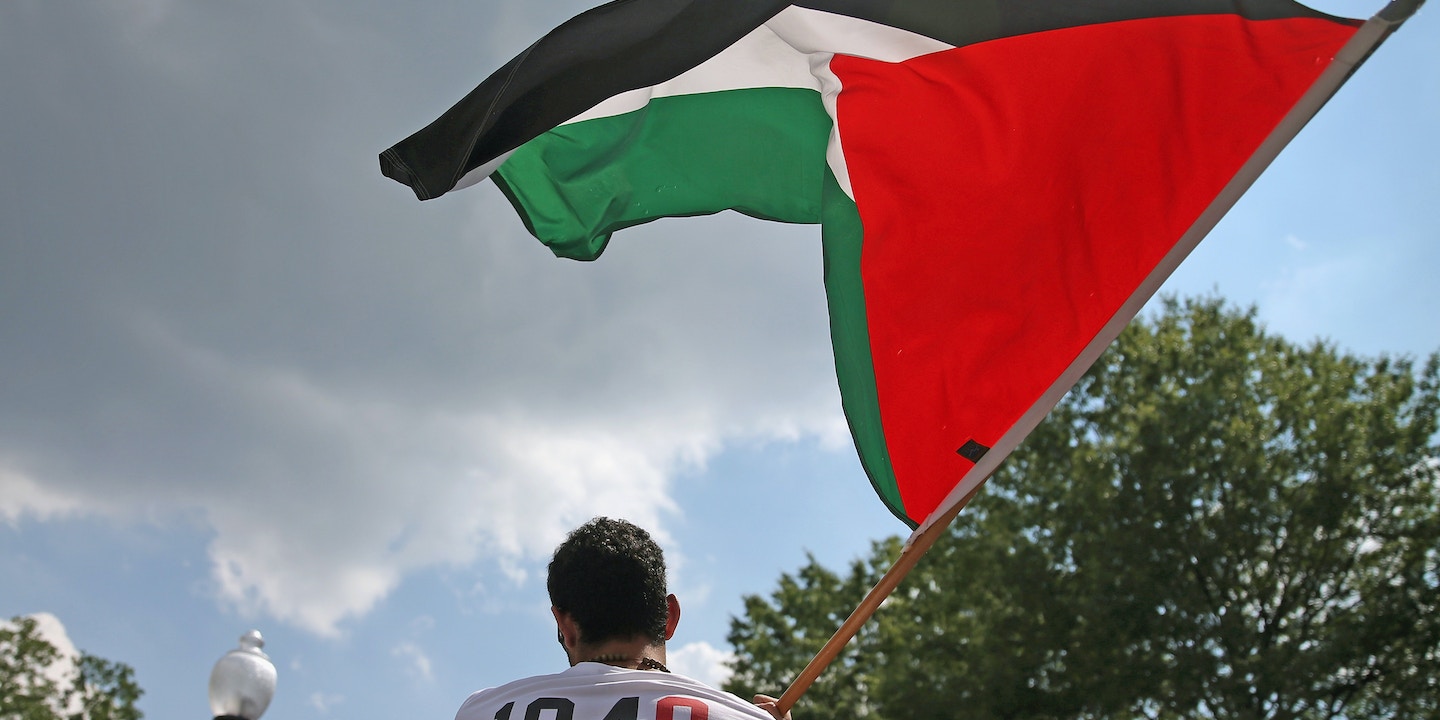 GEORGE WASHINGTON UNIVERSITY police ordered a student to remove a Palestinian flag from his dorm window, with administrators claiming the flag violated their housing code. But a visit to the university Tuesday confirmed countless other national flags hang from dorm rooms there.

The student, 20-year-old pre-med Ramie Abounaja, was threatened by university administrators with future disciplinary action even though he complied with the police order. Civil rights organizations have characterized the flag-removal order as a violation of free speech principles, underscoring the growing attempt to outlaw and punish pro-Palestinian speech on the nation’s campuses.

Abounaja’s ordeal began on October 26, when a university police officer entered his dorm room at GW in Washington, D.C. According to Abounaja, the officer said the department had received “multiple complaints” about a Palestinian flag hanging from his window, and that he would not leave until the flag was removed. Abounaja quickly complied without incident.

A week later, Abounaja received a letter from GW’s Office of Student Rights and Responsibilities, which oversees disciplinary issues. “This letter serves as a warning that this behavior is a violation of the ‘Code of Student Conduct’ and/or the Resident Community Conduct Guidelines,” it stated.

The letter continued: “As a member of the larger residential community we hope that you will be respectful of your peers and be aware of your behavior. The act of an individual has a profound impact on the community. … Subsequent reports naming you as a subject may result in disciplinary action taken by the university.” An Argentine flag hangs out of a window of Sigma Chi fraternity house at George Washington University on Dec. 8, 2015.

Citing the other flags that have long freely hung from GW housing, Abounaja and others are convinced that he was subject to viewpoint-based punishment and selective and discriminatory application of the housing code.

“I felt like I was being singled out, because of my heritage and the viewpoint of my speech, for something I’ve seen dozens of students, fraternities and other student groups do in my three years at GW,” Abounaja wrote in a letter to administrators.

The case is the latest in a long string of incidents targeting pro-Palestinian speech on college campuses across the country. This suppression campaign has intensified in response to growing support on the nation’s campuses for the Boycott, Divestment and Sanctions movement (BDS) against Israel, designed to end the country’s decadeslong, illegal occupation of the West Bank territories.

In an email to The Intercept, Abounaja wrote, “My flag was taken down not because it broke university policy, but because of the numerous complaints people have sent to the department.” He added, “I do believe that the students at GW are very much open minded. … However, a large percentage of students condemn Palestine (and anything related), so I would say that expression is difficult.”

Campus free speech and so-called political correctness censorship have been vigorously debated over the last two decades. That topic received particularly intense attention from journalists and pundits this year in response to controversies at the University of Missouri, Yale and other campuses.

But notably, many of the loudest “anti-PC” voices are silent about threats to pro-Palestinian speech, even though that is the speech that is arguably the greatest and most common target for official campus suppression. Palestine Legal, a U.S. civil rights advocacy organization, reports 140 instances of suppression of Palestine advocacy in the first six months of 2015, 80 percent of which were on college campuses.

Earlier this year, the group issued a report titled “The Palestinian Exception to Free Speech.” It documents how pro-Israel campus groups and alumni “have intensified their efforts to stifle criticism of Israeli government policies. Rather than engage such criticism on its merits, these groups leverage their significant resources and lobbying power to pressure universities, government actors, and other institutions to censor or punish advocacy in support of Palestinian rights.”

In September, the University of California Board of Regents, with prominent political backing, debated a resolution that would label students supportive of BDS or critical of Israel as “anti-Semitic” and subject them to possible suspension or even expulsion.

Steven Salaita, a tenure-tracked professor, was fired by the University of Illinois-Urbana Champaign last year over strongly worded tweets critical of Israel’s invasion of Gaza in which 2,131 Palestinians and 71 Israelis were killed, after which the university paid him $875,000 to settle a lawsuit he brought alleging violation of his free speech rights. Photo: Aidan Adams/Courtesy of Students for Justice in Palestine at GW

In the GW case, officers and officials seem to have been aware from the start that their flag-removal order was likely to prove controversial. After Abounaja complied with the order to remove his Palestinian flag, the officer left but returned minutes later, claiming that his supervisor had insisted on an official report on the incident, which he commented was highly unusual in his long career as a police officer.

The Palestinian-American student wrote that the incident was “humiliating.” “To be criminalized in front of my roommate and have others around the hall open their doors to see what was happening was uncalled for and unexpected.”

The letter from the GW administration threatening Abounaja with future disciplinary action did not specify what rule he had allegedly broken. To this day, more than a month after the flag-removal order, Abounaja still has not been informed of the exact violation, despite inquiries to multiple offices. A banner hangs under a window at the George Washington Williams House on Dec. 8, 2015.

On Monday, after Palestine Legal published an open letter to GW President Steven Knapp requesting an explanation, an apology, and the withdrawal of the disciplinary notice, the university’s Office of Media Relations issued a brief statement:

The George Washington University is committed to fostering a welcoming and safe environment for every member of the GW community, and we encourage students to share their rich diversity of backgrounds, experiences and views with their peers. GW has not banned any flags from its campus; however, the university’s Residential Community Conduct Guidelines prohibit the hanging of any object outside of a residence hall window (Section III. 7). These guidelines apply to all on-campus housing residents.

Section III. 7 states that the “intentional or unintentional throwing, dropping, allowing to fall, lowering of or in any way putting any object, solid or liquid, out of a window or from a balcony or rooftop deck of a residential facility is strictly prohibited.”

In a statement released today, Students for Justice in Palestine at GW said that “these actions point to anti-Palestinian sentiment.” Citing the fact that “flags of other countries hang out of dorm windows with no disciplinary consequence,” the group argued, “selective reinforcement of these rules is discrimination. In this moment of rising Islamophobia in the United States, it is contradictory that a university that advertises inclusivity and diversity would act like this.”

On Monday, Republican presidential frontrunner Donald Trump called for a “total and complete shutdown of Muslims entering the United States until our country’s representatives can figure out what the hell is going on.” Last month, Democratic presidential frontrunner Hillary Clinton reaffirmed her opposition to the pro-Palestinian solidarity movement in an op-ed published in The Forward, vowing to “combat growing efforts to isolate Israel internationally and to undermine its future as a Jewish state, including the Boycott, Divestment and Sanctions movement. I’ve spoken out against BDS in the United States and at the U.N., and will continue to do so.” A pirate flag hangs off of a balcony at the City Hall dormitory on Dec. 8, 2015.

Photo: Josh Serchen/Courtesy of Students for Justice in Palestine at GW

The University Police Department, Office of the President, and Office of Student Rights and Responsibilities did not respond to interview requests from The Intercept. The Office of Media Relations pointed us to its official statement.

GW students contacted by The Intercept confirm that hanging flags from dorm windows and balconies is common on campus and sent photos of multiple current examples, which we are republishing with permission.

“I remember having seen a California state flag, an American flag … a Star Trek flag for the federation, and a couple of countries here and there,” wrote GW student Mikayla Kurland in an email to The Intercept. 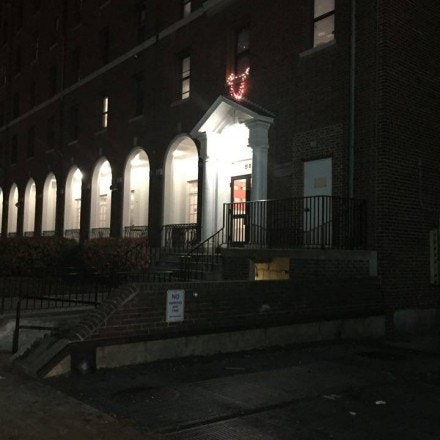 Christmas lights hang out of a window at the Mitchel Hall dormitory on Dec. 7, 2015.

Photo: Priyanka Walimbe/Courtesy of Students for Justice in Palestine at GW

GW is listed by Hillel as having the fifth highest Jewish population of any private school. Almost 30 percent of the student body is Jewish.

The case has elicited mixed responses from students and alumni on the “Overheard at GW” Facebook group. Some felt Abounaja had been wronged by the school and the GW community, while others wrote that the officer was merely responding to an infraction that had been brought to the police department’s attention.

GW has rescinded the warning letter to Abounaja and expunged the
incident from his file. According to a statement from Palestine Legal released on Thursday, “Mr. Abounaja is still seeking clarification that GW will apply its policies equally, along with a written apology from GW for its discriminatory removal of his Palestinian flag, police investigation and reprimand.”

The George Washington University updated their public statement on Wednesday:

GW has responded to the student and Palestine Legal correspondence, and we believe we have addressed the concerns that were raised. Members of the Division of Student Affairs also met with the student. While we believe the university has been responsive, because of federal privacy laws, we are unable to provide additional information about the discussion or the outcome of the meeting.

In a statement posted on Thursday evening, University President Steven Knapp said he has apologized to Abounaja and that the student had been subjected to a flawed process:

At the same time, I have personally apologized to the student for this unfortunate incident and assured him that the university’s actions were in no way a response to his expression of his beliefs or opinions.