Saudi Coalition Just Bombed a Center for the Blind in Yemen

On Tuesday, the Saudi-led and U.S.-backed coalition bombed a center for the blind in Yemen’s capital city of Sanaa, as well as the city’s chamber of commerce, a wedding hall, and at least one residential area. 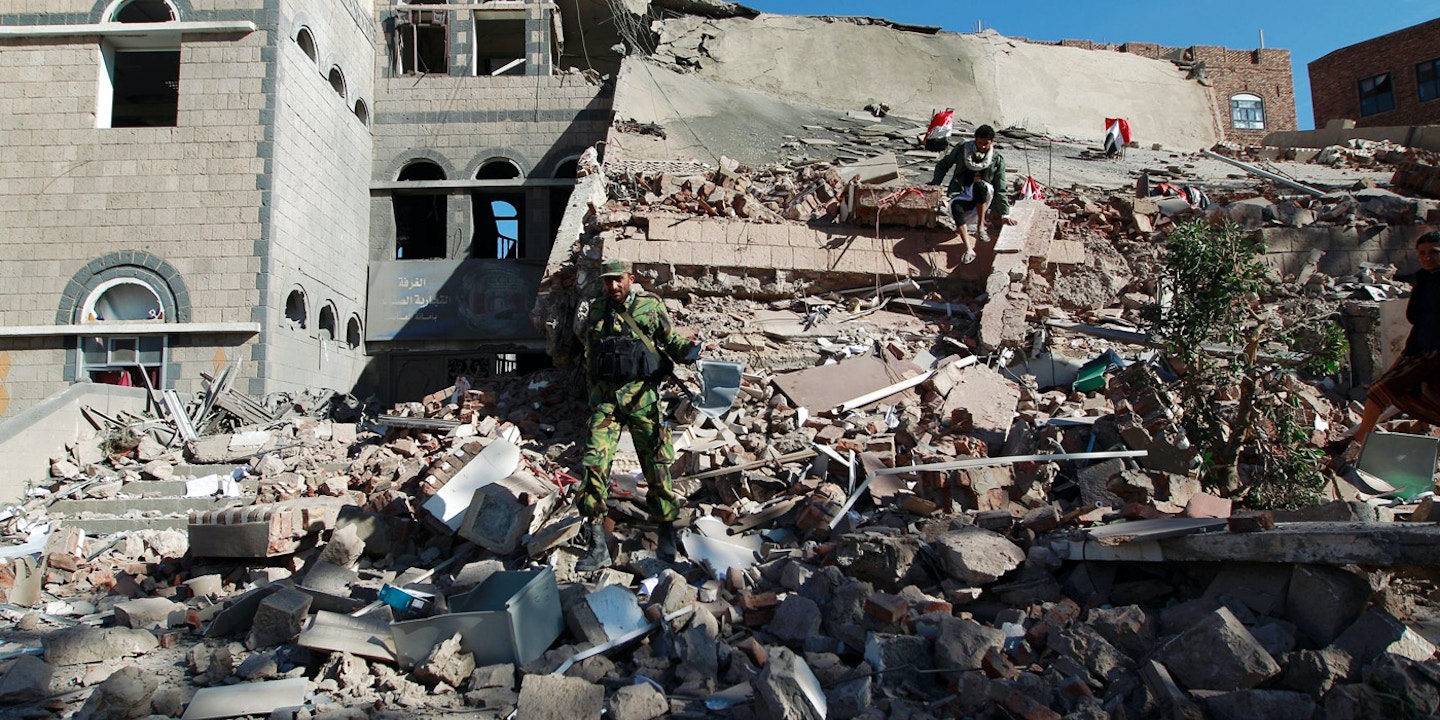 THE NEW YEAR seems to have brought little change for civilians living under bombs in Yemen. Early Tuesday morning, missiles reportedly fired by aircraft supporting the Saudi-led and U.S.-backed coalition damaged a center for the blind in the capital city of Sanaa, as well as the city’s chamber of commerce, a wedding hall, and at least one residential area.

Multiple outlets reported that the attacks caused no casualties, though one local report, citing an unidentified security official, claimed “at least three people” were wounded at the al Noor Center for Care and Rehabilitation of the Blind in Sanaa. Footage from the capital, published by the International Business Times, showed images of crumbled buildings, collapsed rooftops, and a young man weeping in the street. A spokesperson for UNICEF in Sanaa told Vice News that the al Noor Center offers classes for visually impaired students.

In an email to The Intercept Tuesday, Rupert Colville, spokesperson for the United Nations High Commissioner for Human Rights, confirmed that his office had received reports of airstrikes in Yemen indeed hitting the al Noor Center, as well as the other reported sites. The Saudi Embassy in Washington, D.C. and the U.S. Central Command, which oversees operations in the region, did not respond to requests for comment.

Earlier in the day, as reports of the latest round of strikes in Yemen first began to emerge, Colville addressed reporters in Geneva on the “terrible toll” the conflict in Yemen has exacted on the nation’s civilian population, reporting that at least 81 civilians had been killed in Yemen and another 109 injured in December 2015 as result of the ongoing conflict.

These latest figures, Colville pointed out, brought the total number of civilians recorded killed over nine months of fighting to 2,795, with an additional 5,324 civilians recorded wounded, raising the total number of recorded civilian casualties in the conflict to 8,119. According to Colville, the U.N. documented “at least 11 civilians” reportedly killed by Houthi shelling in December — “a significant decrease compared to the 32 civilians who were reported killed by them in November” — while the deaths of 62 of the civilians reported killed last month were attributed to coalition airstrikes.

“This is more than twice the number of civilians reported killed in November,” Colville said. Additionally, the U.N. spokesperson added, “We have also received alarming information on the alleged use of cluster bombs by coalition forces in Hajjah Governorate.” According to Colville, the U.N. documented the presence of cluster munitions in “several” Yemeni villages and two separate incidents of unexploded ordinance injuring people.

Condemned by international groups for the risks they pose to civilians, cluster bombs are banned in a 2008 treaty signed by 117 nations around the world. Saudi Arabia and the United States, however, are not on that list. Last year, Human Rights Watch presented evidence that Saudi Arabia had used U.S.-supplied cluster bombs in its war against the Houthis. At the time, the Saudi government — which in 2015 replenished its arsenal with 22,000 bombs purchased in a $1.2 billion, U.S. State Department-approved deal — insisted that it uses cluster bombs only on legitimate targets.

Journalists and human rights groups have repeatedly exposed the tremendous humanitarian costs associated with the continued bloodshed in Yemen, particularly those associated with coalition airstrikes (see here, here and here). For the time being, however, the conflict shows no sign of letting up. Indeed, the latest rounds of strikes follow the breakdown of a tenuous ceasefire agreed upon last month.

For those on the ground, the sheer scale of violence associated with the ongoing airstrikes continues to boggle the mind. “People with disabilities are being struck in their residence,” Abdullah Ahmed Banyan, a patient at the al Noor Center, told IBT Tuesday. “What is this criminality?” asked Bayan, who described two missiles striking the “live-in quarters” of the building. “Is it the blind that are fighting the war?”

Top photo: Yemenis check the rubble of Sanaa’s chamber of commerce, which was destroyed by airstrikes on the capital, Jan. 5, 2016.