According to public disclosures, by giving just 12 speeches to Wall Street banks, private equity firms, and other financial corporations, Clinton made $2,935,000 from 2013 to 2015: 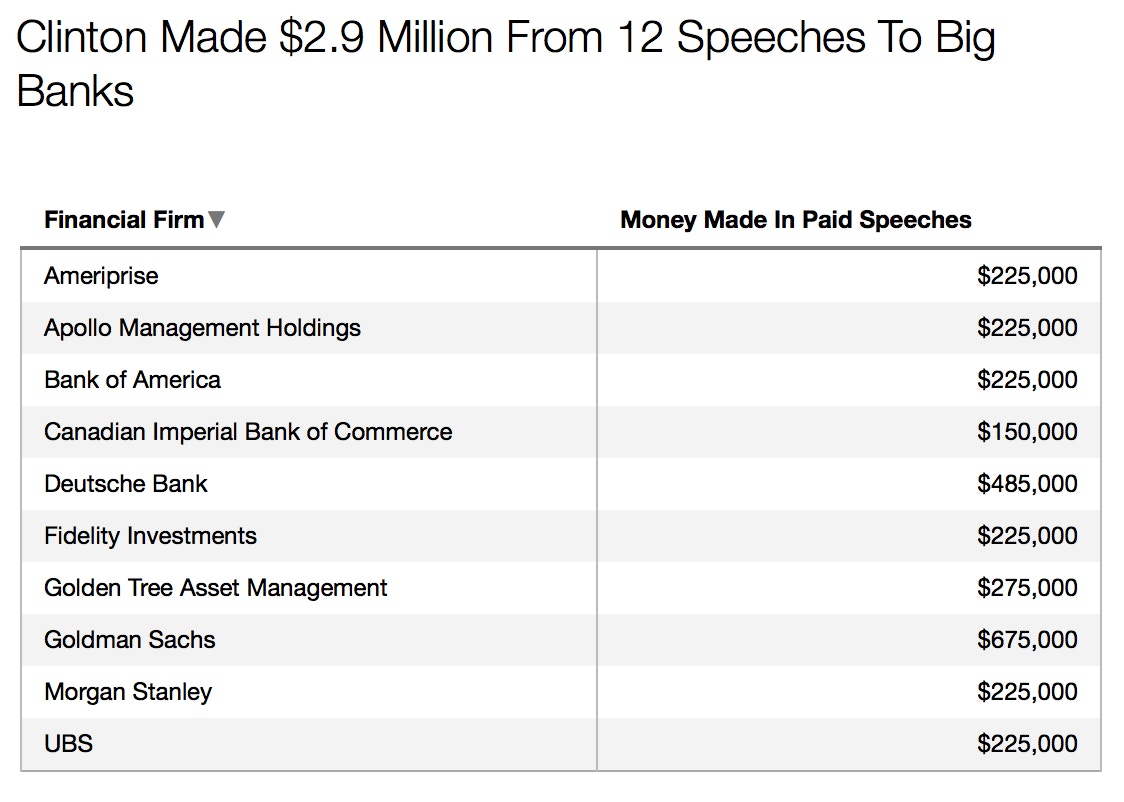 Clinton’s most lucrative year was 2013, right after stepping down as secretary of state. That year, she made $2.3 million for three speeches to Goldman Sachs and individual speeches to Deutsche Bank, Morgan Stanley, Fidelity Investments, Apollo Management Holdings, UBS, Bank of America, and Golden Tree Asset Managers.

The following year, she picked up $485,000 for a speech to Deutsche Bank and an address to Ameriprise. Last year, she made $150,000 from a lecture before the Canadian Imperial Bank of Commerce.

To put these numbers into perspective, compare them to lifetime earnings of the median American worker. In 2011, the Census Bureau estimated that, across all majors, a “bachelor’s degree holder can expect to earn about $2.4 million over his or her work life.” A Pew Research analysis published the same year estimated that a “typical high school graduate” can expect to make just $770,000 over the course of his or her lifetime.

This means that in one year —  2013 — Hillary Clinton earned almost as much from 10 lectures to financial firms as most bachelor’s degree-holding Americans earn in their lifetimes — and nearly four times what someone who holds only a high school diploma could expect to make.

Hillary Clinton’s haul from Wall Street speeches pales in comparison to her husband’s, which also had to be disclosed because the two share a bank account.

“I never made any money until I left the White House,” said Bill Clinton during a 2009 address to a student group. “I had the lowest net worth, adjusted for inflation, of any president elected in the last 100 years, including President Obama. I was one poor rascal when I took office. But after I got out, I made a lot of money.”

The Associated Press notes that during Hillary Clinton’s time as secretary of state, Bill Clinton earned $17 million in talks to banks, insurance companies, hedge funds, real estate businesses, and other financial firms. Altogether, the couple are estimated to have made over $139 million from paid speeches.