One by One, South Sudan Tries to Name Its War Victims

A new project, “Remembering the Ones We Lost,” is compiling a list of civilians killed in Sudanese civil wars since the 1950s. 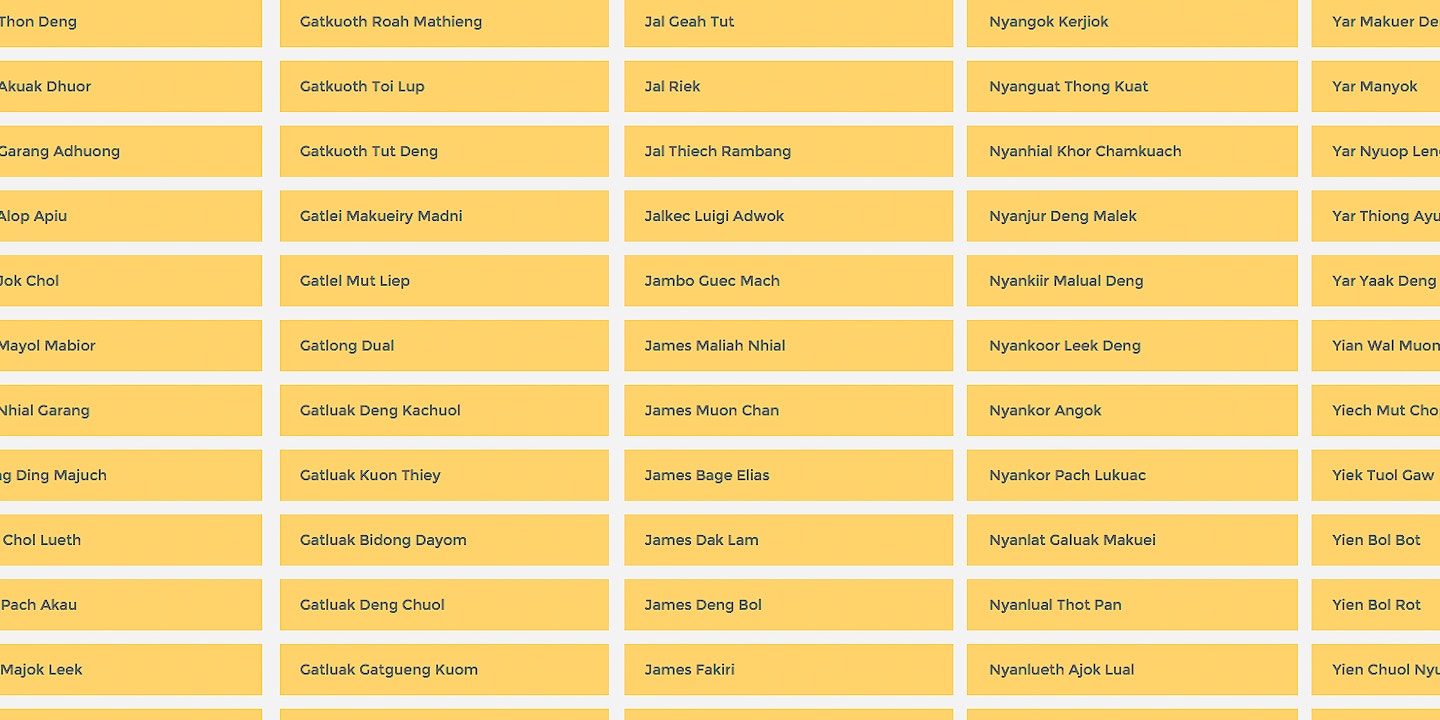 RODA NYAJIECH JUCH, wearing a white and purple dress with a gold band on her ring finger, can’t stop wringing her hands as she tells me about eight students killed near Jebel Checkpoint, a neighborhood in South Sudan’s capital, Juba.

It was December 16, 2013, just hours into a civil war pitting President Salva Kiir, a Dinka, the largest tribe in the country, against Riek Machar, his former vice president and a Nuer, the second largest tribe. The war has defied ceasefires and continues to this day despite a peace deal signed in August.

Juch says she watched from her home across the street as a military vehicle rolled up and opened fire with a machine gun, killing a group of youths whose names she ticks off for me: Kuong Gatpan, Puok Thichot, Kam Machak, Puok Wiech, Leklek Kai, and three brothers, Kai Thoan, Gatkoi Thoan, and Dak Thoan.

In the years since — which have seen war victims forced by soldiers to eat the flesh of their neighbors, the emergence of “rape camps,” boys killed by castration, and young girls sexually assaulted and burned alive — no one has counted the dead. No government office or nongovernmental organization has kept a tally of the names of those killed by government forces, rebels, and other armed groups.

But in a country in which automatic weapons are more plentiful than civil rights, and local journalists are regularly under assault, a tiny civil society group is trying to step into the breach by naming all of the names. A Nuer family, who fled their home, erects a shelter inside a U.N. facility on the outskirts of Juba, South Sudan in 2013.

It began on the first anniversary of the civil war’s outbreak, when a small group of volunteers unveiled a list of 568 names of the people — from toddlers to centenarians — killed in the war to that point. Naming the Ones We Lost was a first step in what the organizers knew would be a long journey to grapple with the immense loss of South Sudanese life over the previous year. Today, the project goes by a slightly different name, Remembering the Ones We Lost, and has a radically expanded mission with a recently launched website.

The goal of the website is nothing short of remarkable — it aims to name all victims of conflict and armed violence in South Sudan since 1955.

“This public memorial hopes to … bring attention to the shared suffering of South Sudanese, giving additional meaning to cries for peace, and be a tool for understanding and reconciliation,” said Daud Gideon, a co-founder of the site, at a ceremony in Juba last month that brought together religious leaders and activists to formally unveil the new project on the war’s second anniversary.

Jehanne Henry, a senior researcher with Human Rights Watch’s Africa division and an expert on South Sudan, noted the significance of a memorial that reaches back to the 1950s: “It says, ‘Look, these conflicts are linked together. What happened in December 2013 did not happen in isolation, it’s linked with the failure to deal with many decades of horrific violence in South Sudan.’”

Even so, almost 98 percent of the more than 4,300 names on the website are of those killed during the current conflict. According to Anyieth D’Awol, a former U.N. human rights officer and one of the project’s organizers, some names were gathered from news articles and human rights reports. Many more come from eyewitness testimony, says Edmund Yakani, another organizer and the executive director of the Community Empowerment for Progress Organization (CEPO), a civil society group.

Last year, when I visited his office, a nondescript beige building near the Kenyan Embassy in Juba, Yakani hauled out a stuffed binder filled with “South Sudan Eyewitness Declaration Forms,” a multipage questionnaire designed to gather data for the project. I read through one form after another, each recounting heinous crimes: men assaulted or killed, women raped, looting, forced cannibalism. It’s the same type of testimony I heard while interviewing scores of war victims around the country, the same sorts of crimes recounted to United Nations and Human Rights Watch investigators. Yakani says there are around 10 more binders like it, a veritable encyclopedia of horrors. 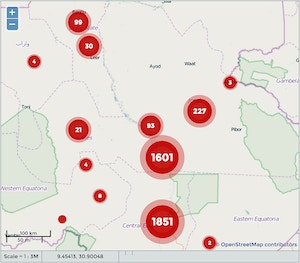 A map shows the clusters of war victims.

Map: Remembering the Lost Ones

A map on the Remembering the Ones We Lost homepage suggests that most of the current victims in the group’s database are clustered around Juba and Bor, a town to the north in which thousands of Dinka civilians were killed by forces under Machar in 1991 during the prior civil war — and in a repeat of the slaughter in early 2014 when forces allied with Machar again devastated the town. “A lot of killings happened in those places, but a lot of killings happened in other places as well,” D’Awol tells me. “We just don’t have that data.”

The new website is designed with this dearth of information in mind, specifically the inclusion of a page that allows the public to provide new names, testimony, and even photos — which can also be submitted via text message, Twitter, and email. The submitted names will be researched and vetted by the project’s volunteers.

I don’t see the names given to me by Juch, but perhaps one day they will be added, along with the thousands of women, children, and men killed in Bor, Malakal, and Bentiu, as well as the many bomas (villages) about which little information has yet surfaced.

“As we honor our loved ones lost since 1955, we are hoping for peace, peaceful coexistence, reconciliation among communities, and for forgiveness among South Sudanese everywhere,” said Gideon as he ended his remarks on the war’s second anniversary. “Never again do we want to see lives lost in such a way.”

This article was reported with support from Lannan Foundation.