Onion staffers may think twice before they produce more stories like “Hillary Clinton Tries To Woo Voters By Rescinding Candidacy.” 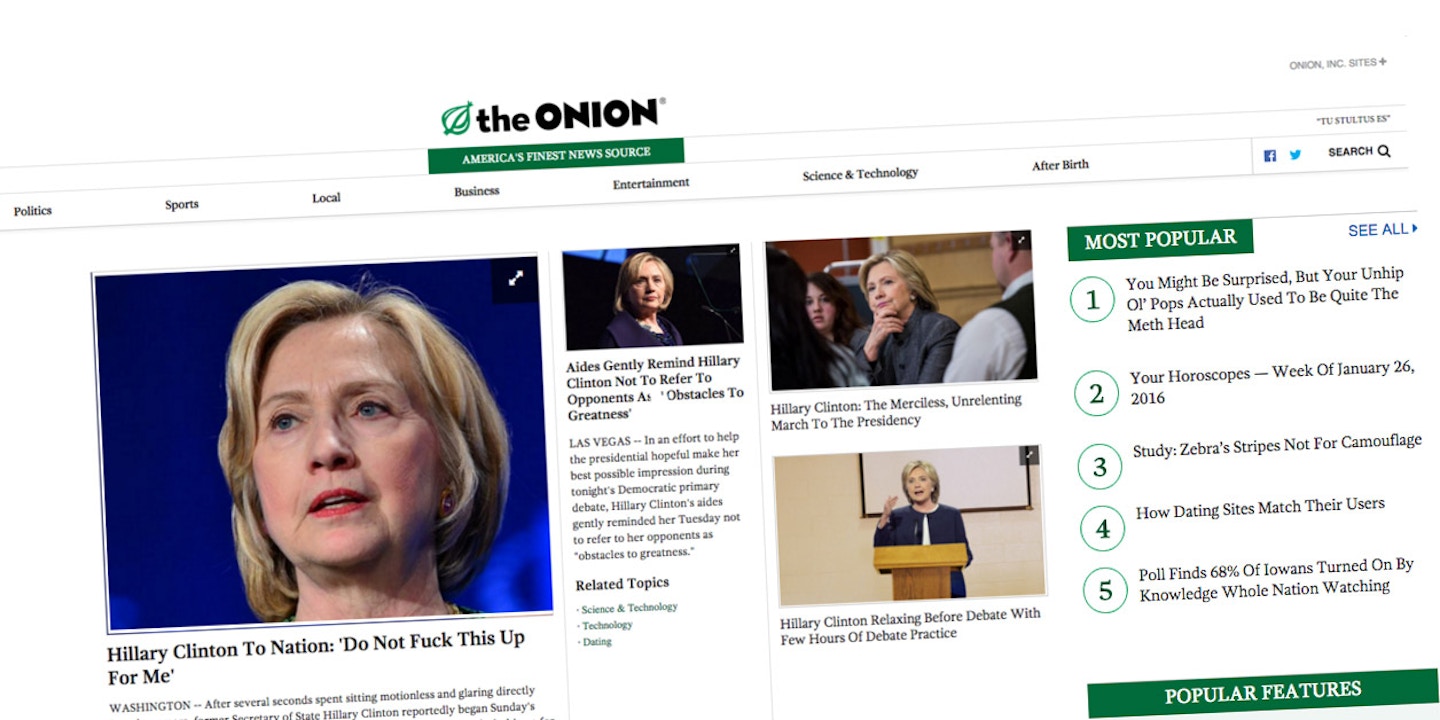 Onion staffers may think twice before they produce more stories like Hillary Clinton Tries To Woo Voters By Rescinding Candidacy, Hillary Clinton To Nation: ‘Do Not Fuck This Up For Me,’ Hillary Clinton: The Merciless, Unrelenting March To The Presidency, or the signed Hillary Clinton editorial titled I’m Weighing Whether Or Not I Want To Go Through The Hell Of Appealing To You Idiotic, Uninformed Oafs.

Many news outlets covered Univision Communications’ purchase last week of a stake in The Onion, the world’s leading news publication. According to NPR, Univision bought a 40 percent controlling interest in the company, and also acquired the option to buy the remainder of The Onion in the future.

But what’s gotten no attention at all is that Haim Saban, Hillary Clinton’s biggest fan and financial supporter, is Univision’s co-owner and chairman. Saban and his wife, Cheryl, are Hillary Clinton’s top financial backers, having given $2,046,600 to support her political campaigns and at least $10 million more to the Clinton Foundation, on whose board Cheryl Saban sits. The Sabans are also generous supporters of the overall Democratic Party infrastructure, donating, according to the Center for Responsive Politics, a total of $16.1 million since 1989 to Democratic and liberal candidates, party committees, leadership PACs, and federally focused 527s. Hillary Clinton at Saban Research Institute with Cheryl and Haim Saban in 2003.

Saban badly wants Hillary Clinton to be elected president this year, vowing to provide “as much as needed” to see it happen, since “she would be great for the country and great for the world,” and “on issues I care about, [Clinton] is pristine plus.”

An extensive New Yorker profile of Saban recalls how Saban publicly described his “three ways to be influential in American politics” in 2009. One was political donations. Another was establishing think tanks (he founded the Saban Center for Middle East Policy at the Brookings Institution in 2002). And the third was controlling media outlets.

Univision also owns The Root, and Saban has made attempts to buy the Los Angeles Times and, he says, the New York Times.

Saban is not shy about throwing his weight around. In 2001, when Brazilian regulatory approval became a roadblock to the sale of Fox Family, the company he founded with Rupert Murdoch, he asked Bill Clinton to call the president of Brazil to push for a quick approval. When the deal went through, Saban personally made $1.5 billion; the next year he gave a “record-breaking” $7 million to the Democratic Party for a new national headquarters and $5 million to Clinton’s presidential library.

The New York Times reported in 2009 that Saban was apparently part of a scheme before the 2006 Democratic takeover of Congress in which Saban would threaten then-Minority Leader Nancy Pelosi that he would withhold donations if Pelosi didn’t make then-Rep. Jane Harman, D-Calif., chair of the House Intelligence Committee. (In return, according to the Times report, which was based on telephone calls intercepted by the National Security Agency, Harman would lobby the Bush administration for leniency for two pro-Israel lobbyists under investigation for espionage. Harman denied ever speaking to the Justice Department about the case, but did not address whether she contacted any White House officials.)

And according to a high-ranking official of the Young Democrats of America, during the 2008 Democratic presidential primary Saban offered to donate $1 million to the YDA if the organization’s two super delegates committed to Hillary Clinton.

Beyond Saban’s deep connections to the Clintons, Onion staffers likely have taken note of his statement that “I’m a one-issue guy, and my issue is Israel.”

The Onion, in the past, has published articles like Israel: Palestinians Given Ample Time To Evacuate To Nearby Bombing Sites, Israel Vows To Use Veto Power If Chuck Hagel Confirmed As U.S. Secretary Of Defense, and Israel Calls For Increase In U.S. Taxes To Fund Attacks On Gaza.

Saban said in 2014 that if Israel believed the anticipated international nuclear deal with Iran “puts Israel’s security at risk,” then Israel should “bomb the living daylights out of these sons of bitches.”

The Onion’s lead story the day its sale to Univision was announced was Iranian Nuclear Scientists Hurriedly Flush 200 Pounds Of Enriched Uranium Down Toilet During Surprise U.N. Inspection. (To be fair, The Onion has long been uncharacteristically ignorant and unfunny on Iran, running stories like Iranian Team Openly Working On Bomb In Negotiating Room.)

Onion writers have in the past described repeated battles with its advertising side over what it publishes, culminating with the company’s president sitting the editor-in-chief down to demand “good taste and good sense” in its issue after Hurricane Katrina.

The Onion declined to answer any questions about its change in ownership beyond providing a previously released memo from its CEO to its staff. Saban was not available to comment.