New FEC filings show that all of the $417,250 in monetary donations to a Super PAC called “Black Americans for a Better Future” comes from conservative white businessmen — including $400,000, or 96 percent of the total, from white billionaire hedge fund manager Robert Mercer. 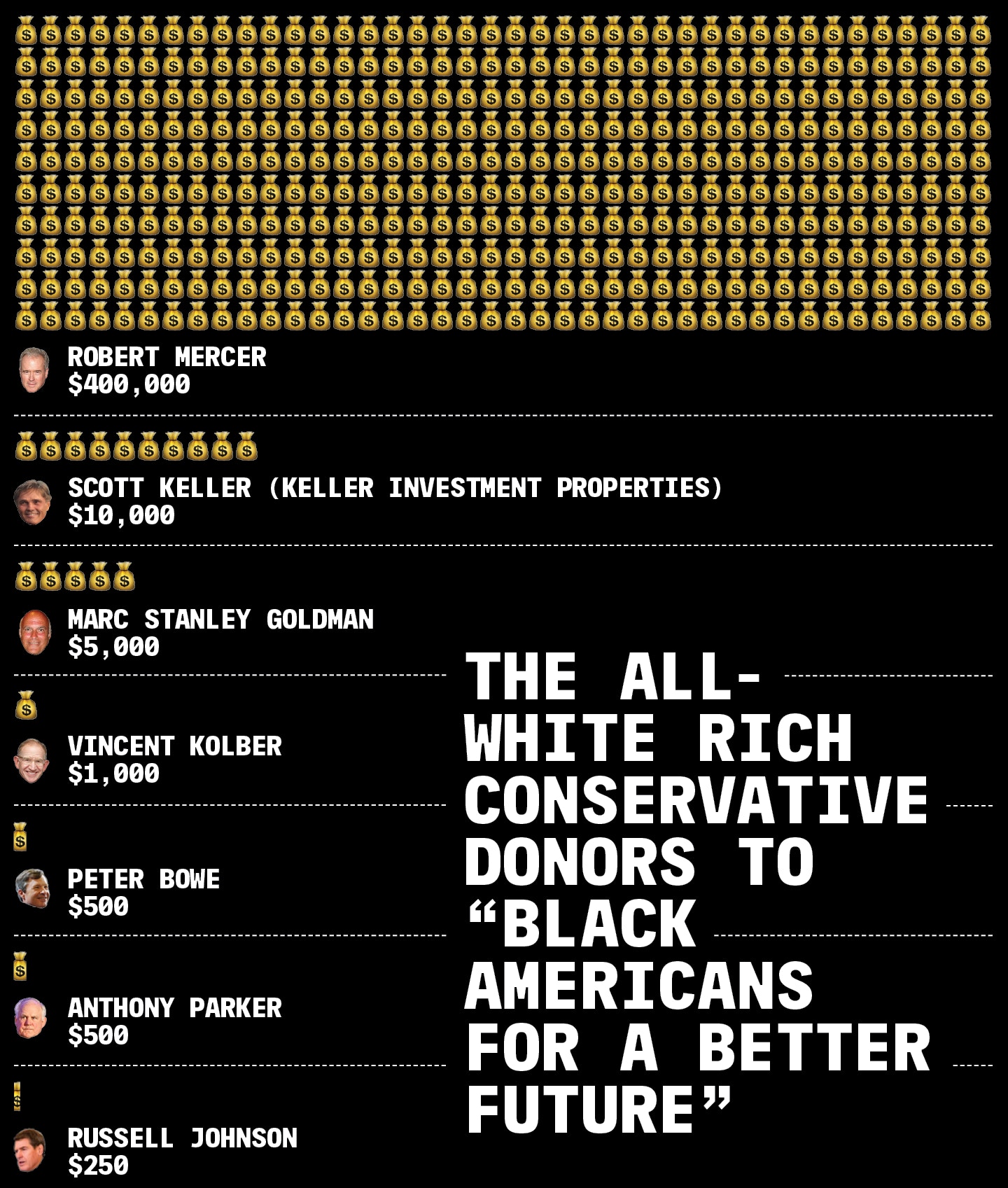 Mercer, co-CEO of Renaissance Technologies on Long Island, is best-known politically for donating $11,000,000 to Keep the Promise I, a Super PAC backing Ted Cruz’s presidential run.

Beyond Mercer’s support of Black Americans for a Better Future and Ted Cruz, Mercer has a long and peculiar history of donations to political and philanthropic causes.

The Mercer Family Foundation has given over $1.4 million to the Oregon Institute of Science and Medicine, which is stockpiling huge amounts of human urine to “revolutionize the evaluation of personal chemistry.” In 2010 Mercer spent $600,000 in an effort to elect OISM’s co-founder Arthur Robinson to Congress. (OISM is eager to collect as much urine as possible, so if you would like to donate a sample of your own, the details are available here.)

BABF appears to exist solely as a vehicle for Washington, D.C., consultant Raynard Jackson, who is African-American. Jackson is quoted on his firm’s website stating that “You have a fundamental right to pursue business interests with the least amount of interference from the government.” Jackson has elsewhere accused Barack Obama of “relentless pandering to homosexuals.”

At an event in November 2015 at the National Press Club, which cost BABF $13,252.79 for the venue and catering, Jackson said that “Having well-trained, credible, experienced African-Americans constantly challenging the liberal orthodoxy in the media will create a tectonic shift in the perception of the Republican Party within the Black community.”

As of its current FEC filings, BABF has spent a total of $172,424.69, including $38,983.45 in net salary payment, to Jackson for the last five months of 2015. Together with $26,952.55 disbursed for payroll taxes, this indicates Jackson is receiving an annual salary of $155,000. The Super PAC’s remaining spending has been mostly for travel, hotels, and food, including about $5,000 at New York’s famous Morton’s Steakhouse on Fifth Avenue.

The other donations to BABF consist of:

Raynard Jackson did not respond to inquiries via Twitter and the voicemail for the number listed on his consulting firm’s website is full.

(Thanks to Derek Willis of ProPublica and Dave Levinthal of Public Integrity, who pointed out Mercer’s donations to BABF on Twitter.)