Congressional Hearings on Surveillance Programs to Kick Off — in Secret

The public is being shut out as the House Judiciary Committee starts tackling two foreign surveillance programs, PRISM and Upstream, that vacuum up domestic content. 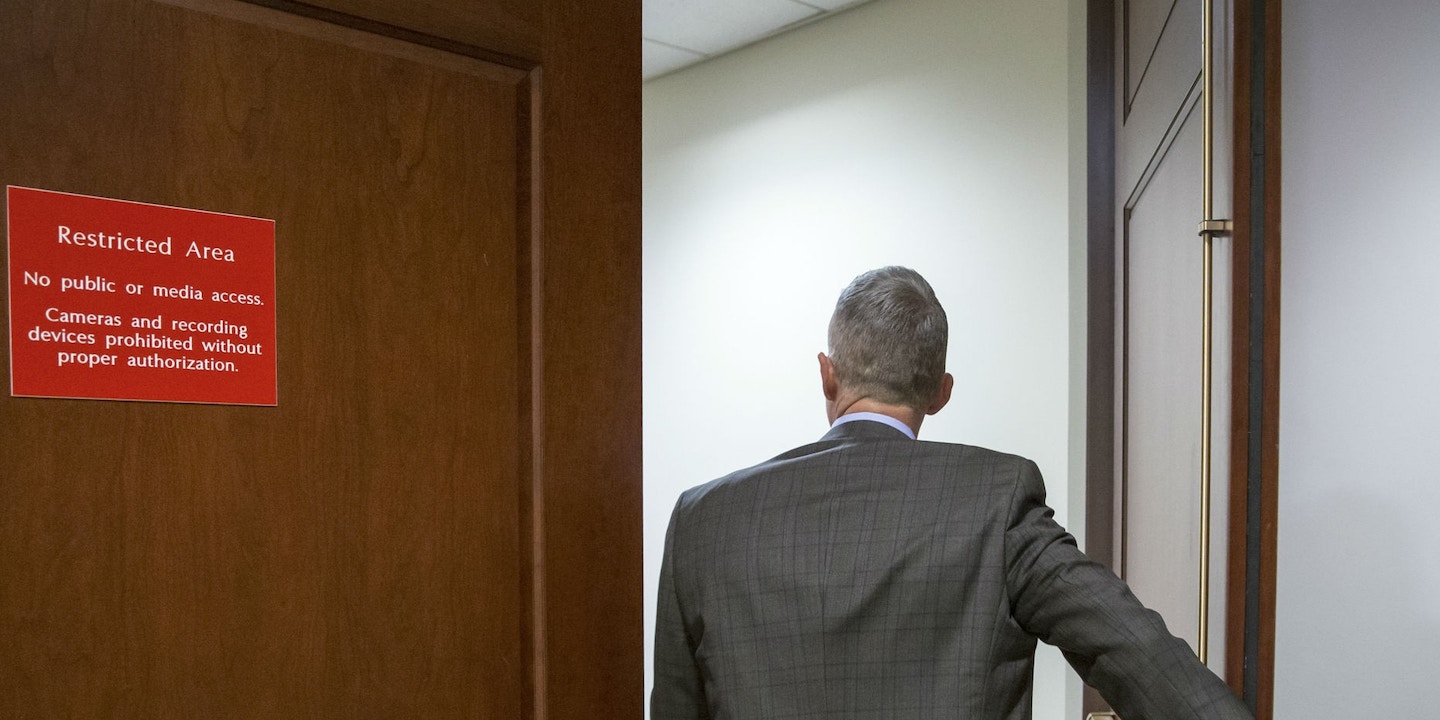 The House Judiciary Committee will hold its first hearing next week on two of the NSA spying programs revealed by whistleblower Edward Snowden that vacuum up domestic content despite being ostensibly targeted at foreigners: PRISM and Upstream.

But, to the great consternation of 26 government accountability groups who wrote an angry letter to committee leaders on Wednesday, the public is not invited. The entire hearing is classified, and closed.

Section 702 of the Foreign Intelligence Surveillance Amendments Act of 2008, which has been cited as the legal authority for those two programs, lapses next year.

The debate over whether to reauthorize it is expected to be the most substantive public examination of the NSA’s surveillance regime since Congress’s decision to end NSA’s collection of bulk metadata of U.S. phone calls.

Kicking off that debate with a closed hearing sets the wrong tone, groups including openthegovernment.org and the ACLU wrote in their letter. “It continues the excessive secrecy that has contributed to the surveillance abuses we have seen in recent years and to their adverse effects upon both our civil liberties and economic growth.”

The authors of the letter reminded the committee that discussions over the original passage of the FISA Amendments Act in 2008 “happened largely in open session,” and that matters of national security are often discussed in open hearings, with classified briefings reserved for specific questions.

Specifically, they wrote, “In the case of Section 702 implementation oversight, a completely closed hearing is unnecessary to provide members with an adequate understanding of how the law is currently implemented by the executive branch and whether that exceeds Congress’s original intent.”

The two programs that run under Section 702 vacuum up hundreds of millions of online messages and voice communications, including emails, Skype calls, and Facebook messages, that involve “targeted” suspects overseas and the people they talk to. PRISM gets the data from companies like Google, Apple, and Yahoo. Upstream siphons it off from major internet cables owned by the big telecom companies.

The programs accidentally sweep up American communications, too — how many, we still don’t know. And once those communications are in the database, the NSA can search them without a warrant.

“Closed briefings are necessary for members of Congress to ask questions about classified information,” said Judiciary Committee member Jim Sensenbrenner, R-Wisc., in a statement to The Intercept. “However, I would support a subsequent open hearing on Section 702 of the Foreign Intelligence Surveillance Act because transparency and public discussion are critical to the reform and reauthorization of Section 702.”

Sensenbrenner was the original author of the USA Patriot Act, which was interpreted by the NSA as authorizing bulk collection of American telephone records. Since the Snowden revelations, Sensenbrenner has argued the law was never meant to sanction that kind of power. He has sponsored the Judicial Redress Act, which is aimed at providing foreigners the opportunity to sue in some cases where they claim their data is being improperly handled. Section 702 has basically no protections for foreign citizens’ data — despite President Barack Obama’s pledge to provide privacy protections to those overseas.

Rep. Zoe Lofgren, D-Calif., a longtime privacy advocate, called for holding an open hearing soon. “Reports indicate that FISA Section 702 authority has been used by the NSA to search Americans’ photographs, emails, and other communications without warrant or probable cause,” she said in a statement emailed to The Intercept. “The House has twice overwhelmingly voted to close the 702 loophole. During markup last year, Chairman [Bob] Goodlatte indicated his intent to deal with these problems before the 702 sunset date forces Congress to act hastily. While it is important to address some questions in a classified setting, open hearings on the aspects of 702 surveillance that are not classified are essential. I hope the committee will hold a public hearing in the coming weeks.”

Closed sessions deprive not just the public of information, but other members of Congress as well. “The warrantless surveillance conducted under Section 702 of the Foreign Intelligence Surveillance Act is arguably worse than the collection of records authorized by Section 215 of the Patriot Act,” Rep. Thomas Massie, R-Ky., said in a statement to The Intercept. “Unfortunately, closed committee sessions and insufficient congressional oversight contributed to the evolution of our unconstitutional surveillance state. Moving forward, it is imperative that Congress approach Section 702 reform as openly as possible.”