Sanders and Clinton went head to head Thursday night over the effects of taking massive amounts of money from corporate special interests. 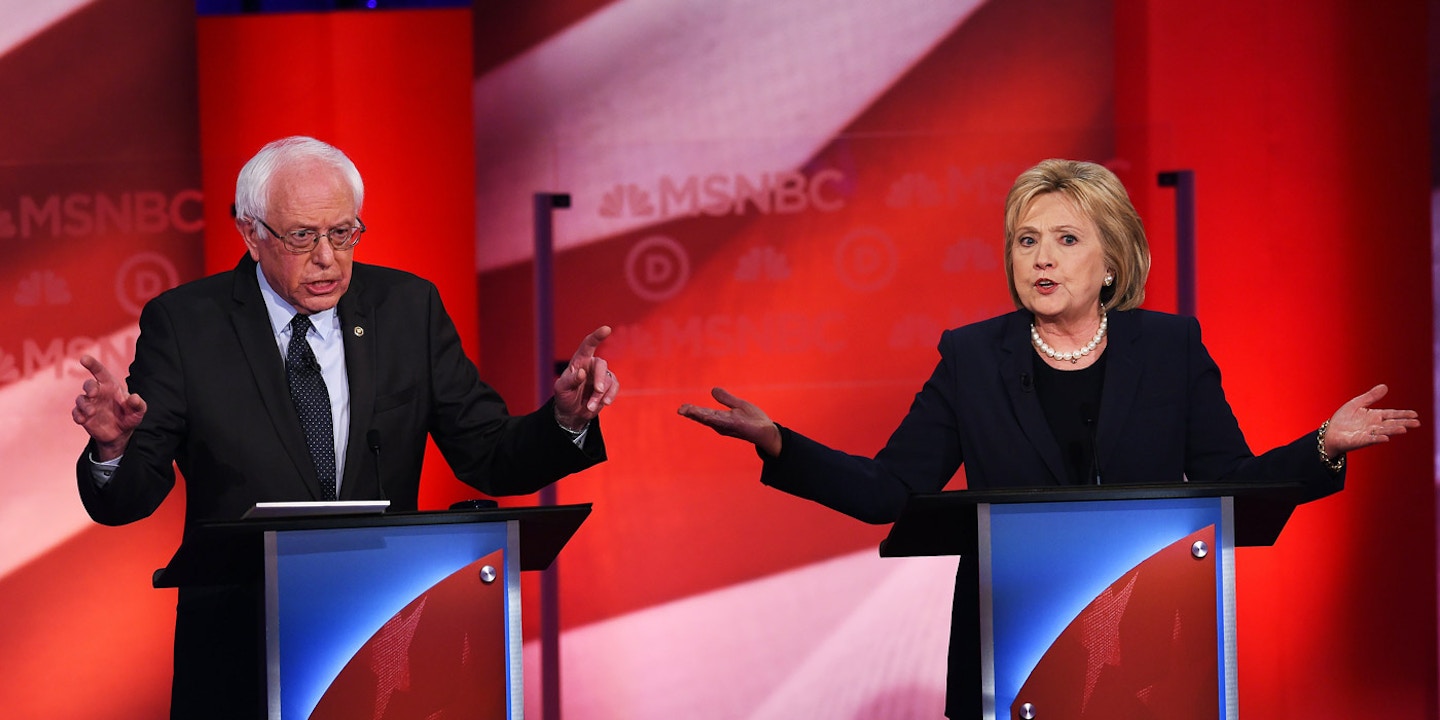 Bernie Sanders and Hillary Clinton had a series of momentous exchanges Thursday night over what Clinton called Sanders’ “artful smear” — the suggestion that taking massive amounts of money from corporate special interests had corrupted her.

Clinton told Sanders during Thursday’s Democratic presidential debate that he would not find a single example of money changing her mind or her vote, and she attacked him for his criticism “by innuendo, by insinuation” that “anybody who ever took donations or speaking fees from any interest group has to be bought.”

Sanders responded by citing examples of political and prosecutorial decisions in the recent past that couldn’t really be explained any other way.

Let’s talk about why, in the 1990s, Wall Street got deregulated. Did it have anything to do with the fact that Wall Street provided — spent billions of dollars on lobbying and campaign contributions?

Well, some people might think, yeah, that had some influence.

Let’s ask why it is that we pay, by far, the highest prices in the world for prescription drugs, and [the price of] your medicine can be doubled tomorrow, and there’s nothing that the government can do to stop it. …

Let’s talk about climate change. Do you think there’s a reason why not one Republican has the guts to recognize that climate change is real, and that we need to transform our energy system? Do you think it has anything to do with the Koch brothers and ExxonMobil pouring huge amounts of money into the political system?

… There is a reason. You know, there is a reason why these people are putting huge amounts of money into our political system. And in my view, it is undermining American democracy and it is allowing Congress to represent wealthy campaign contributors and not the working families of this country.

Clinton said she herself had been the target of corporate interests:

I don’t think you could find any person in political life today who has been subjected to more attacks and had more money spent against her by special interests, among whom you have named a few, than I.

And I’m proud of that. You know, when I took on the drug companies and the insurance companies for universal health care coverage, they went after me with a vengeance.

Today, you’ve got hedge fund billionaires aligned with Karl Rove, running ads against me to try to get Democrats to vote for you. I know this game. I’m going to stop this game.

And she insisted that Wall Street was against her:

I think the best evidence that the Wall Street people at least know where I stand and where I have always stood is because they are trying to beat me in this primary. They have collected and spent as much as $6 million on these ads. Hedge fund billionaires, Karl Rove, another billionaire, jumped in.

And why are they doing that? These are guys who try to make smart investments. They know my record, they know me, they know that I say what I believe and I will do it. And I also have a pretty good understanding about how to stop them.

But as the Washington Post reported on Thursday, “donors at hedge funds, banks, insurance companies and other financial services firms had given at least $21.4 million to support Clinton’s 2016 presidential run — more than 10 percent of the $157.8 million contributed to back her bid.” In fact, the Post even noted that Hillary Clinton has now “brought in more money from the financial sector during her four federal campaigns than her ­husband did during his ­quarter-century political career.”

Sanders hasn’t directly accused Clinton of being corrupted, but his argument is essentially that no one is incorruptible — that no one could take millions of dollars in contributions and speaking fees from Wall Street and not be influenced by that.

By giving just 12 speeches to Wall Street banks, private equity firms, and other financial corporations, Clinton made $2,935,000 from 2013 to 2015 — more than many people earn in a lifetime.

In all, she and her husband have collected over $125 million in speaking fees since 2001. They’ve also raised $2 billion for the Clinton Foundation.

But the obvious, inevitable influence of massive campaign donations in particular has been a central element of Sanders’ campaign. And he’s had extraordinary success in collecting small donations — averaging $27 — from millions of supporters, keeping him competitive with Clinton and her more deep-pocketed donors.

Clinton’s relationship with Goldman Sachs has become a particular flashpoint. Clinton was asked Thursday night if she would release the transcripts from her private, highly paid speeches there — and elsewhere. She demurred.

Clinton made $675,000 for three speeches to Goldman Sachs, an investment bank that has regularly used its influence with government officials to win favorable policies.

Sanders had a lot to say about Wall Street in general, and Goldman Sachs in particular:

Wall Street is perhaps the most powerful economic and political force in this country. You have companies like Goldman Sachs, who just recently paid a settlement fine with the federal government for $5 billion for defrauding investors.

Goldman Sachs was one of those companies whose illegal activity helped destroy our economy and ruin the lives of millions of Americans. But this is what a rigged economy and a corrupt campaign finance system and a broken criminal justice is about. These guys are so powerful that not one of the executives on Wall Street has been charged with anything after paying, in this case of Goldman Sachs, a $5 billion fine.

Kid gets caught with marijuana, that kid has a police record. A Wall Street executive destroys the economy, $5 billion settlement with the government, no criminal record. That is what power is about. That is what corruption is about. And that is what has to change in the United States of America.