The pundit consensus — which has been wrong about everything — is that Clinton is electable and Sanders is not. The data suggests the opposite is true.

Many Democrats will tell you that there has rarely, if ever, been a more menacing or evil presidential candidate than Donald Trump. “Trump is the most dangerous major candidate for president in memory,” pronounced Vox’s Ezra Klein two weeks ago. With a consensus now emerging that the real estate mogul is the likely GOP nominee, it would stand to reason that the most important factor for many Democrats in choosing their own nominee is electability: meaning, who has the best chance of defeating the GOP Satan in the general election? In light of that, can Democrats really afford to take such a risky gamble by nominating Hillary Clinton?

In virtually every poll, her rival, Bernie Sanders, does better, often much better, in head-to-head match-ups against every possible GOP candidate. Here, for instance, is a compilation of how Clinton does against Ted Cruz in recent polls: She trails the Texas senator in all but one poll, and in the one poll she leads, it is by a paltry 2 points:

By stark contrast, Sanders leads Cruz in every poll, including by substantial margins in some:

A similar story is seen in their match-ups against Trump. Although they both end up ahead in most polls, Sanders’ margin over Trump is generally very comfortable, while Clinton’s is smaller. Clinton’s average lead over Trump is just 2.8 percent, while Sanders’ lead is a full 6 points: Then there’s the data about how each candidate is perceived. Put simply, Hillary Clinton is an extremely unpopular political figure. By contrast, even after enduring months of attacks from the Clinton camp and its large number of media surrogates, Sanders remains a popular figure.

A Gallup poll released this week reported that “29 percent of Americans offer a positive observation about Clinton while 51 percent express something negative.” As Gallup rather starkly put it: “Unfortunately for Clinton, the negative associations currently outnumber the positive ones by a sizable margin, and even among Democrats, the negatives are fairly high.” Sanders is, of course, a more unknown quantity, but “the public’s comments about Sanders can be summarized as 26 percent positive and 20 percent negative, with the rest categorized as neutral, other or no opinion.”

In fact, the more the public gets to see of both candidates, the more popular Sanders becomes, and the more unpopular Clinton becomes. Here’s Quinnipiac explaining that dynamic in one graph just a few days ago:

This Huffington Post chart, compiling recent polls, shows not only that Clinton is deeply unpopular among the electorate, but becomes increasingly unpopular the more the public is exposed to her during this campaign: 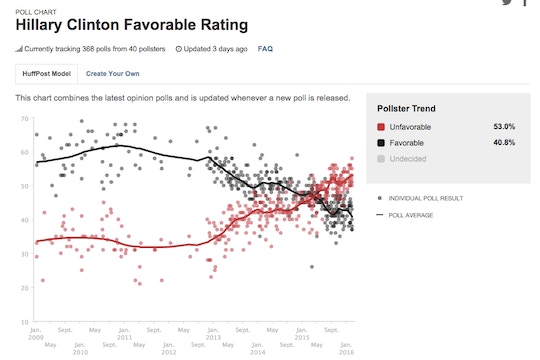 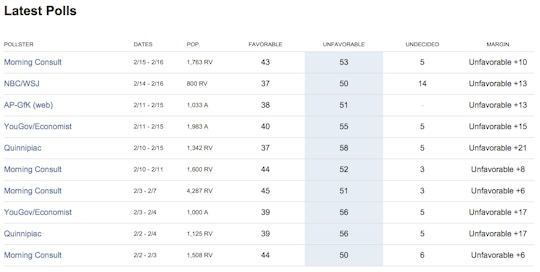 Then there’s the particular climate of the electorate. While it’s undoubtedly true that racism and ethno-nationalism are significant factors in Trump’s appeal, also quite significant is a pervasive, long-standing contempt for the political establishment, combined with enduring rage at Wall Street and corporate America, which — along with the bipartisan agenda of globalization and free trade — have spawned intense economic suffering and deprivation among a huge number of Americans. This article by the conservative writer Michael Brendan Dougherty is the best I’ve read explaining the sustained success of Trump’s candidacy, and it very convincingly documents those factors: “There are a number of Americans who are losers from a process of economic globalization that enriches a transnational global elite.”

In this type of climate, why would anyone assume that a candidate who is the very embodiment of Globalist Establishment Power (see her new, shiny endorsement from Tony Blair), who is virtually drowning both personally and politically in Wall Street cash, has “electability” in her favor? Maybe one can find reasons to support a candidate like that. But in this environment, “electability” is most certainly not one of them. Has anyone made a convincing case why someone with those attributes would be a strong candidate in 2016?

Despite this mountain of data, the pundit consensus — which has been wrong about essentially everything — is that Hillary Clinton is electable and Bernie Sanders is not. There’s virtually no data to support this assertion. All of the relevant data compels the opposite conclusion. Rather than data, the assertion relies on highly speculative, evidence-free claims: Sanders will also become unpopular once he’s the target of GOP attacks; nobody who self-identifies as a “socialist” can win a national election; he’s too old or too ethnic to win, etc. The very same supporters of Hillary Clinton were saying very similar things just eight years ago about an unknown African-American first-term senator with the name Barack Hussein Obama.

Perhaps those claims are true this time. But given the stakes we’re being told are at play if Trump is nominated, wouldn’t one want to base one’s assessment in empirical evidence rather than pundit assertions, no matter how authoritative the tone used to express them?

It’s possible to argue that electability should not be the primary factor. That’s certainly reasonable: Elections often are and should be about aspirations, ideology, and opinion-changing leaders. But given the lurking possibility of a Trump presidency, is now really the time to gamble on such a risky general election candidate as Hillary Clinton?