Chris Matthews’s “Hardball” Guests Have Given $79,050 to His Wife Kathleen’s Congressional Campaign

The transparency Chris Matthews promised when it came to his relationship with his wife’s campaign has not extended to mentioning all the donations from his guests. 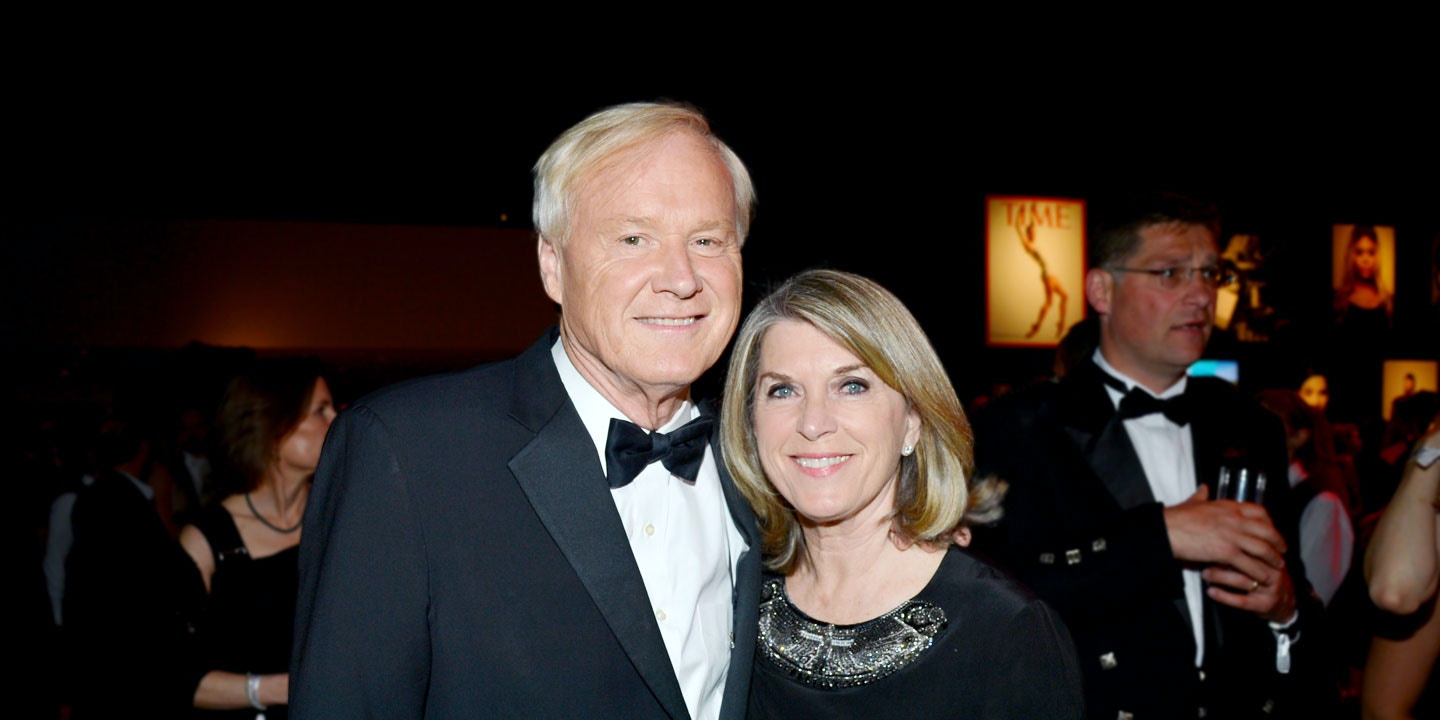 One day last June, MSNBC’s Chris Matthews opened his show with some news: His wife, Kathleen Matthews, a former local news anchor and Marriott hotel executive, had announced a run for Congress, seeking to replace Chris Van Hollen in Maryland’s 8th District. Matthews enthusiastically endorsed his wife’s candidacy, and vowed to “offer Kathleen whatever help I can.”

The longtime host of Hardball added: “As a journalist, I also know how important it is to respect certain boundaries on my support for her both in my public role and here on MSNBC. And while most of you know that our show doesn’t typically cover congressional races, I will continue to fully disclose my relationship with her as part of MSNBC’s commitment to being transparent and fair in our coverage.”

In the ensuing months, Kathleen’s name has rarely come up on Hardball. But many of the guests on the show have become generous donors to her campaign. And the transparency Matthews promised has not extended to mentioning that to his audience.

Using Federal Election Commission data and Hardball transcripts, The Intercept has identified 48 frequent guests of Matthews’s program who have made donations to the Kathleen Matthews for Congress campaign. These individuals, their spouses, or their political action committees donated $79,050 as of December 31, 2015 — about 5 percent of the $1.5 million Matthews had raised as of that time.

Some of the guests made the donations after they were on the show — in some cases, long after. But in at least 11 of these cases, the Hardball guests appeared on the program after Kathleen Matthews announced her candidacy, and without any disclosure of the donations. And in at least three of those cases, the donations came within days of the MSNBC appearance.

Campaign finance experts told The Intercept they do not believe the donations violate FEC guidelines. Payola rules from the Federal Communications Commission would prohibit program hosts from receiving payments in exchange for putting individuals on the air, but they only appear to apply to broadcast stations, not cable, and Chris Matthews didn’t receive the payments; his wife did.

They include veterans of the Obama, Clinton, George H.W. Bush, Reagan, Carter, Ford, and Nixon White Houses. They include members of the media, corporate lawyers, lobbyists, advocacy organization leaders, consultants, campaign managers, and one current cabinet official. The list defines a bipartisan coterie of insiders and backslappers, many of whom have a reserved spot in the Hardball rolodex.

NBCUniversal did not respond to requests for comment about its disclosure policy regarding guests on Hardball who have donated to Matthews’s wife. Before Kathleen Matthews announced her candidacy, MSNBC said it would take “all appropriate measures” to ensure fair coverage of the race, “which would include fully disclosing Chris’s relationship to Kathleen if her candidacy is mentioned either by him or a guest.”

The Kathleen Matthews for Congress campaign did not respond to a request for comment.

Some of the guest/donors, like former White House adviser David Gergen ($500) or lobbyist and Democratic strategist Hillary Rosen ($500), now appear on CNN. Others appeared on the show more when they were more prominently in the public eye, like former members of Congress Jim Moran ($1,500) or Ellen Tauscher ($1,000). Others are surprising donors to a Democratic congressional candidate, like former Republican National Committee chair Frank Fahrenkopf ($1,000) or Reagan official Ken Duberstein ($1,000).

In several cases, the spouses of frequent guests made the donation, either by themselves or in addition to their partners. Paul Pelosi, husband to the Democratic leader of the House, Nancy Pelosi, gave $1,000 to Kathleen Matthews. Jackie Clegg-Dodd, wife of Chris Dodd, former senator and president of the Motion Picture Association of America, gave $500. Dick Blum, husband of Sen. Dianne Feinstein, maxed out with a $2,700 donation. So did Afsaneh Beschloss, wife of NBC News presidential historian and recurring Hardball guest Michael Beschloss.

Beschloss, Daschle, Frost, and McCaskill are among the Hardball guests who have appeared after Kathleen Matthews announced her candidacy for Congress last June. Others include Purple Strategies consultant Steve McMahon, a regular guest who maxed out to Matthews with a $2,700 donation; Ruth Marcus, another regular whose husband, former Federal Trade Commission chair Jon Leibowitz, gave $500; Virginia Gov. Terry McAuliffe, whose wife donated $2,000; Virginia Sen. Mark Warner, whose wife gave $2,700; and U.S. Secretary of Agriculture Tom Vilsack, a $1,000 donor.

McMahon told The Intercept that “it is inherently sexist for anyone to suggest that Kathleen Matthews isn’t doing this on her own.” He added that he donated to Matthews because “I support candidates I believe in,” and that he hopes to continue to appear on Hardball “long after my friend Kathleen Matthews is elected to Congress.” He did not respond to whether donations by on-air Hardball guests should be disclosed.

Several donations stand out for their timing. Sen. Kirsten Gillibrand’s Off the Sidelines PAC, which supports female candidates, donated $10,000 to Matthews on June 20, 2015. On June 22, she appeared on Hardball to talk about sexual assault on college campuses. A spokesperson for the Off the Sidelines PAC, Glen Caplin, explained that Hardball producers asked Gillibrand to be on the show on June 15, before the donation was made, and that the show was taped June 18, only running later because the segment was preempted for breaking news.

Asked whether the show ought to have disclosed the donation to Matthews’s campaign, Caplin said, “I’m not going to comment on what MSNBC’s policy should be.” He added that Gillibrand was never asked by Matthews for a donation, and that she regularly sends maximum donations to viable woman candidates. “Kathleen Matthews is a great candidate that Kirsten is excited to support, period,” Caplin said.

Martin Frost’s first donation to Kathleen Matthews’s campaign came August 1, the day after he appeared on Hardball to talk about a book he wrote with former Rep. Tom Davis. “Chris did not personally solicit my donation and we had no discussion of Kathleen’s race,” Frost said in an email. He added that his wife has family in Maryland’s 8th District, giving him a “strong interest” in who succeeds Chris Van Hollen, who is running for Senate.

Another donation featured similar timing. Sen. Barbara Boxer announced her endorsement of Kathleen Matthews on January 11, 2016, and her campaign committee, known as PAC for a Change, contributed $1,000. The next day, Boxer appeared on Hardball to talk about the State of the Union address, one of several recent appearances. PAC for a Change did not respond to a request for comment.

Kathleen Matthews, who herself has appeared on Hardball frequently — but not since she began her campaign — has led the fundraising race for the 8th District seat, which holds its primary April 26. The crowded field in wealthy Montgomery County includes Jamie Raskin, a state senator whose wife, Sarah Bloom Raskin, is the No. 2 official at the Treasury Department; former Obama aide Will Jawando; and David Trone, a rich wine retailer who has already spent millions on television ads.

Matthews’s donors come largely from the corporate wing of the Democratic Party, if not the corporate world itself (other contributors include Google chairman Eric Schmidt, American Express CEO Ken Chenault, and private equity kingpin Steven Schwarzman, along with a flotilla of corporate PACs and lobbyists).

Also among her donors: many Democrats who led the movement to make the party friendlier to business in the 1980s, like former Democratic Congressional Campaign Committee chair Tony Coelho, his colleague and DCCC veteran Vic Fazio, and Democratic Leadership Council founder Al From.

Chris Matthews, who was once as an aide for former House Speaker Tip O’Neill, has occasionally referred to his wife in his “Let Me Finish” segments, once showing pictures of the two of them on a trip to Israel. In one instance, on February 12, Matthews ran a closing segment about Valentine’s Day that looked an awful lot like a biographical ad for his wife. In each case, Matthews did not mention that Kathleen was running for Congress.

The Washington Post in October noted the number of Matthews campaign contributions from people tied to Bill Clinton’s administration. Campaign adviser Mandy Grunwald ($500), former Chief of Staff Mack McLarty and his wife ($5,400 in all), one-time Commerce Secretary William Daley ($2,700), and ex-Justice Department official Jamie Gorelick ($2,700) are all donors. Aside from Daley, these individuals have also been guests on multiple Hardball shows, and critics have charged that the support from Clinton associates has colored Matthews’s commentary of the Democratic presidential primary. Over 10,000 MoveOn.org members signed a petition to remove Matthews from the air over his perceived pro-Clinton bias; the network has ignored the request.

The New York Times noted last week that the race is likely to be the costliest House primary in the country.