Women dislike Trump at what appears to be an unprecedented level for a national politician.

If Hillary Clinton and Donald Trump are the 2016 presidential candidates, gender will be part of the campaign in an unprecedented way. It goes beyond the fact that Clinton would be the first woman nominated by one of the two major parties as its presidential candidate: Polls consistently show that women really, really don’t like Trump, and men — to a lesser but still significant degree — really don’t like Clinton. 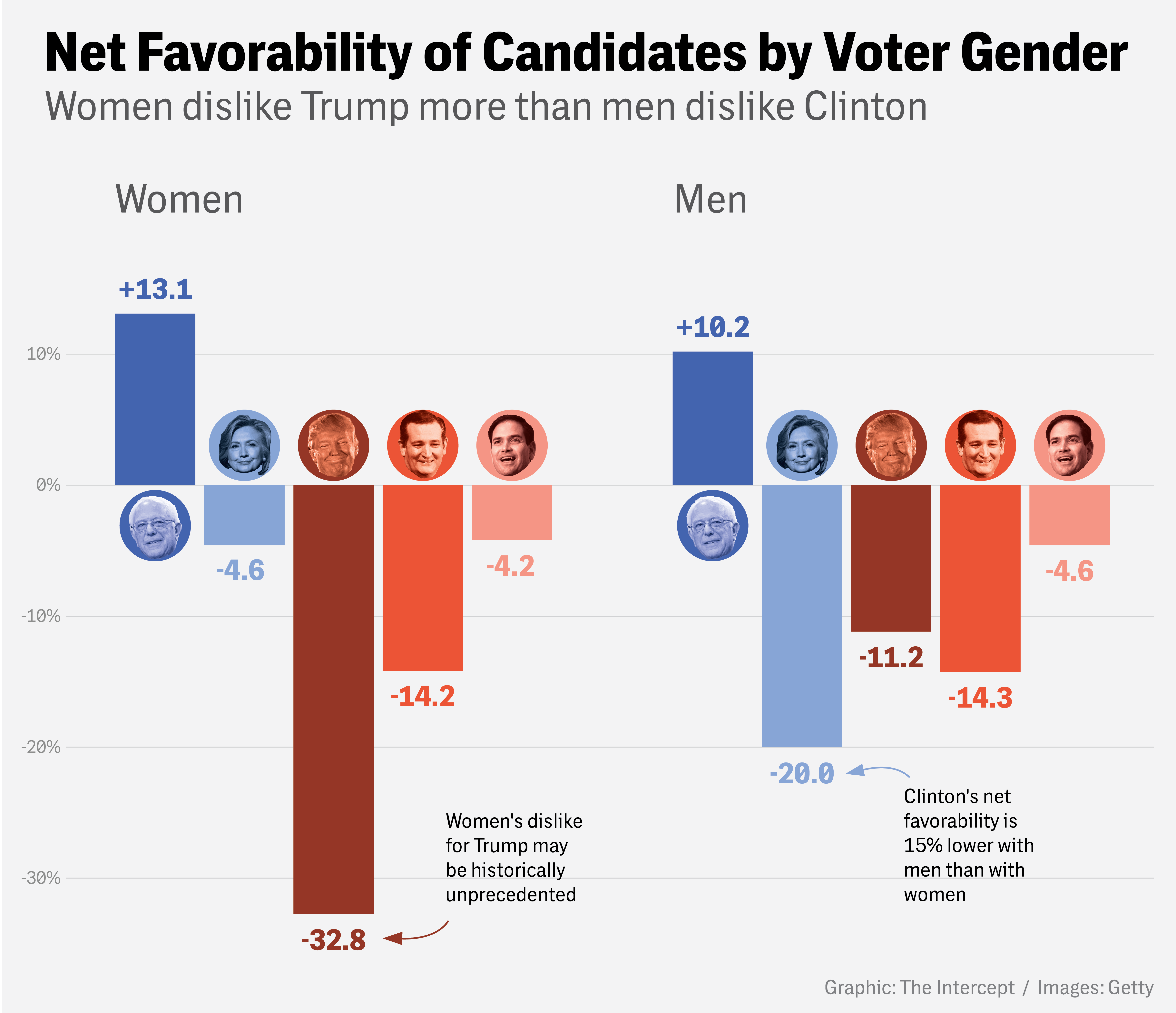 Americans overall don’t like Trump or Clinton. In polls taken over the past six weeks, Trump’s average net favorable/unfavorable rating has been minus 23 percent, and Clinton’s has been minus 12 percent.

However, beneath the surface, it’s the high level of distaste for both of them among the opposite gender that is driving those awful ratings.

Women’s hatred for Trump presumably is connected to his straightforward misogyny, which he expresses so profusely that it’s become the star of its own anti-Trump Super PAC ad. Rosie O’Donnell is a “disgusting pig” and an “animal”; Arianna Huffington is a “dog,” as is New York Times columnist Gail Collins; a lawyer deposing him was “disgusting” for requesting a break to pump breast milk for her infant daughter; and when Megyn Kelly asked him about this last August, he claimed she had “blood coming out of her … wherever.” (More recently, Trump has explained that Kelly is “crazy” and a “total whack job.”) Additional, seemingly endless examples are just a click away.

“The way that Trump interacts with other people is very violent, he seems like a physical bully. … He seeks out conflicts in which he is going to be gratuitously brutal to other people,” says Liza Featherstone, editor of False Choices: The Faux Feminism of Hillary Rodham Clinton. “I think women instinctively pick up on that. And it has nothing to do with policy.”

“If men dislike Clinton more [than other Democrats], it’s partly sexist,” says Featherstone. “If you hate Hillary because she reminds you of your ex-wife, that is sexist. If you dislike Hillary because she has dedicated her life to the neoliberal polices that have screwed you, as a working person, that’s not sexist.”

Featherstone notes that Bernie Sanders, the only major candidate with a positive net favorability with both women and men, “is able to channel some of the aggression that men feel in general, and sometimes with good reason, about politics. … A lot of men are very disenfranchised and mad about it, and Sanders is mad about it too. And he has a personal style that doesn’t hide that. He’s pretty tough.”

In the end, it seems impossible that men’s views of Clinton, and especially women’s views of Trump, won’t have an impact if it comes to actual voting. And in recent polls of a head-to-head match between Trump and Clinton, women say they would vote for her at a rate 19 percentage points higher than that of men. Surprisingly, however, if this holds true in November, it will be only the second biggest gender gap in recent presidential elections — losing to the 2012 election, when Barack Obama did 20 percentage points better against Mitt Romney with women than with men.