The hikes come as a direct result of organizing by thousands of people in the union-backed “Fight for 15” movement that kicked off in 2012, which was quickly derided by pundits. 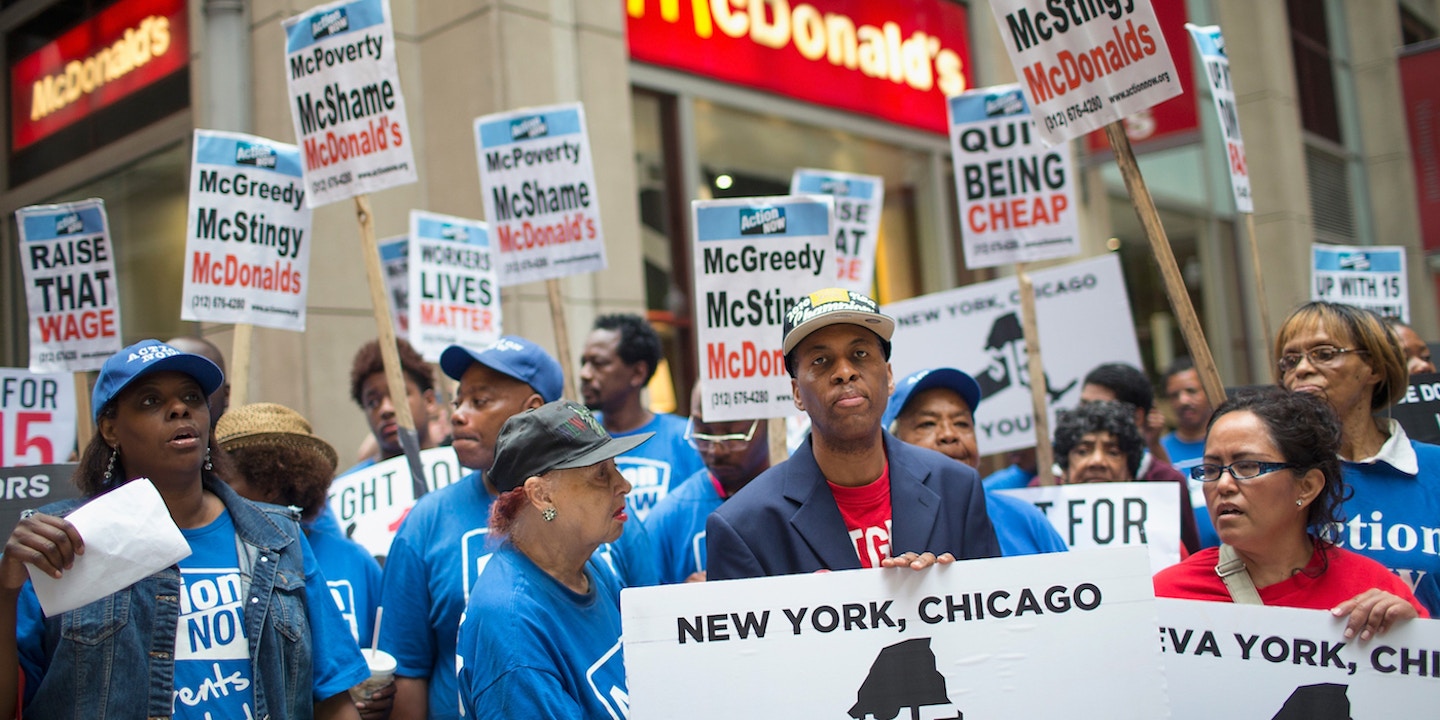 THE PUNDITS said it would never happen. But both California and New York on Monday implemented legislation that moves them toward a tiered minimum wage of $15 an hour, covering 60 million Americans.

The hikes come as a direct result of organizing by thousands of people in the union-backed “Fight for 15” movement that kicked off in 2012 — organizing that was quickly decried by pundits and opponents as unrealistic and unlikely to ever succeed.

The Fight for 15 movement began when several hundred fast-food workers in New York City went on a brief strike to call for higher wages; by the next year, this movement had spread to dozens of cities, with workers going on miniature strikes and protest marches to call for a $15 an hour wage.

This innovative tactic — organizing workers with no union representation to go on flash strikes to call attention to their meager wages — raised eyebrows among many in the pundit class who attempted to downplay its power.

The Atlantic’s Derek Thompson wrote an article in 2013 titled “Why the Fast-Food Worker Strikes Are Doomed,” warning that “there are more people willing to do these jobs than there are people willing to strike. … It is hard for me to see how the higher-wage movement succeeds on the streets.”

Danny Vinik, today an assistant editor at Politico, said the strikes were “mistimed,” and cautioned that “we still have an unemployment problem and that means there are replacement workers available to firms. Fast-food workers have no leverage right now.”

“The $15 goal is ambitious, and probably unrealistic in the current job climate,” the Christian Science Monitor’s Mark Trumbull concluded.

Brookings Institution economist Gary Burtless told Fox Business that the minimum wage wouldn’t rise to $15 unless we saw large inflation. “When today’s purchasing power hits the point where $15 is worth what $10 is worth today, then yes, I think it will happen,” he told the network. “In truth, it’s hard for unorganized workers to achieve an increase in their relative wages. Based on the last 100 years of American labor, it’s very hard for workers that are not formally organized to achieve that goal.”

“It’s unlikely restaurant workers will get to $15 an hour anytime soon,” Vanessa Wong at Bloomberg wrote. “Many of these jobs don’t require highly skilled workers, so the candidate pool remains large and there’s usually little incentive for restaurants to pay richly.”

NPR produced a pessimistic segment in September 2014 titled “‘Fight For 15’ Struggles to Organize Fast-Food Workers.” Correspondent Anne Mostue dryly noted, “The Fight for 15 rally started at the Massachusetts Statehouse with only eight actual fast-food workers. They were flanked by dozens of labor organizers and supporters. Together they marched to a nearby McDonald’s. But none of the employees inside joined the protest. Instead, they continued working, declining to speak to reporters except to say they couldn’t afford the time off. That’s part of what’s making this a tough movement.”

Dylan Matthews, then of the Washington Post and today at Vox, wrote that “even supporters of minimum wage hikes don’t think [a $15 wage is] a serious option.”

None of this is to say that these skeptics were completely wrong. The federal minimum wage remains at $7.25 an hour. Most fast-food workers still earn pitifully low wages, far below the ambitious new levels set by California and New York. But it does show that by aiming high, the Fight for 15 movement accomplished much more than its skeptics and detractors — who dismissed it out of hand — ever predicted.