Surveillance Debate Gets a Needed Dose of Racial Perspective

“The Color of Surveillance” conference focuses on the relationship between government spying and the overly aggressive policing of minorities. ALVARO BEDOYA HAS been working on surveillance, privacy, and technology in Washington for years now. Before founding Georgetown Law’s Center on Privacy & Technology, he served as chief counsel to Sen. Al Franken, D-Minn., and the Senate Judiciary Subcommittee on Privacy, Technology, and the Law.

But as surveillance became a major national issue thanks to NSA whistleblower Edward Snowden, Bedoya saw something disturbing amid the Washington wonkery: a huge gulf between the discussions of government spying, on the one hand, and aggressive policing tactics in minority communities on the other. 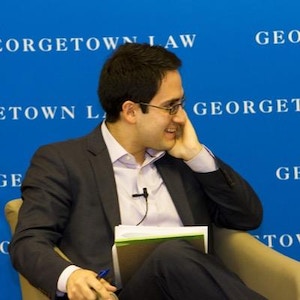 “We’re having these two separate debates that are running in parallel and never intersecting,” Bedoya explains. “There’s no recognition that those issues constantly overlap. The level of policing of the black community is facilitated by the surveillance laws and surveillance technology developed for the war on terror.”

Today’s much anticipated all-day conference, “The Color of Surveillance: Government Monitoring of the African American Community,” is an attempt to bridge the gulf. The conference, organized by Bedoya and Georgetown Law professor Paul Butler, runs from 9 a.m. to 5 p.m. ET, and is being live streamed here, hashtag #ColorofSurveillance.

In January, Bedoya wrote an essay in Slate exploring the history of FBI surveillance of activists and people of color, using the example of Martin Luther King Jr., and how those practices have advanced with technology.

Similarly, the conference will start with the history of surveillance reaching all the way back to the days of slavery and plantations, when policies like lantern laws, enacted in the 18th century, forced black, mixed race, and other enslaved people to carry a light at night to identify themselves.

The timeline will then jump to World Word I, W.E.B. Du Bois, and the “negro subversion” division of military intelligence, which was formed to spy on black activists. Then, attendees will hear about Martin Luther King Jr. and the days of FBI Director J. Edgar Hoover and his COINTELPRO program focused on monitoring of social and political activists.

Presentations from the present day, Bedoya says, will focus on developments since the September 11 attacks, and the expansion of the government’s overall spying power at home and abroad.

Speakers include Freddy Martinez of Lucy Parson Labs, who recently won a lawsuit against the Chicago Police Department to disclose documents on the city’s use of Stingray technology, which mimics a cellphone tower in order to grab up information about nearby cellphones. For the past year, he and his colleagues have been working on a project tracking how the city has used money from civil forfeitures and the war on drugs to fund its expensive surveillance equipment.

Hamid Khan will speak about the architecture of surveillance in Los Angeles, where his grassroots Stop LAPD Spying Coalition works on exposing and eliminating the police department’s aggressive use of predictive policing, data gathering, and technology to track and criminalize homeless, poor, and minority communities.

Brandi Collins, representing the Color of Change, is expected to speak about her work pushing the government to reveal the extent of the Department of Homeland Security’s monitoring of Black Lives Matter activists, while Boston University researcher Khiara Bridges will talk about her research on pregnant women in New York on Medicaid whose entire lives are exposed by invasive questioning, unlike wealthy women who can afford private health care.

Finally, Bedoya says he wants to turn the tables on technology being framed as a tool to spy reserved for the government.

“I don’t want to have the narrative that technology is just a tool of oppression. It empowers communities to watch back,” he says, describing an application that allows citizens to track their interactions with police.