Germany plans to repeal an obscure law against insulting foreign leaders, but will enforce it in the meantime. 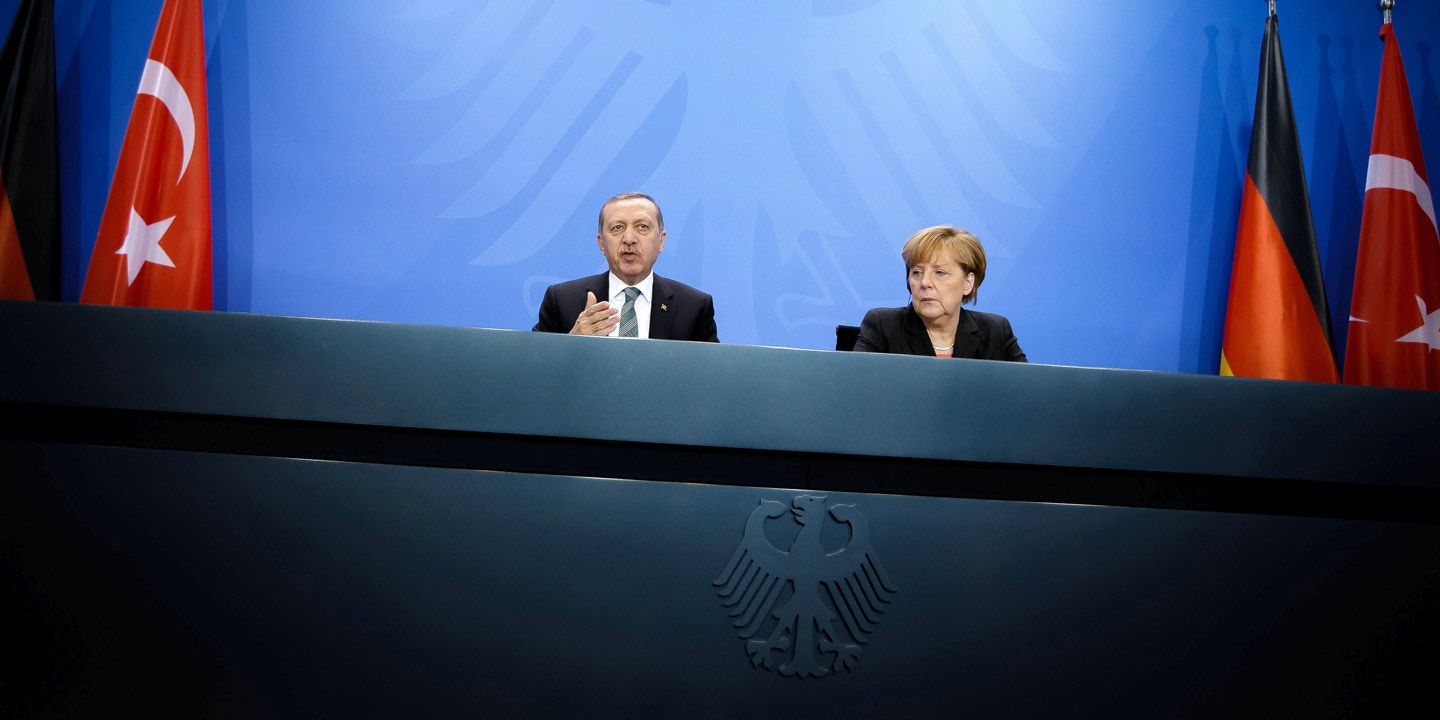 CHANCELLOR ANGELA MERKEL alienated a broad swathe of the German public on Friday by approving a request from Turkey to prosecute Jan Böhmermann, a comedian who insulted Turkish President Recep Tayyip Erdogan by reading an obscene poem about him on late-night television.

In the same statement, however, Merkel said that her government would move to repeal the law Böhmermann appears to have violated, an obscure provision of the German penal code that makes it a crime to insult foreign heads of state. If approved, the change would not take effect until 2018.

In the meantime, Böhmermann now faces possible prosecution both for breaking that law — an artifact of the ancient prohibition on hurting the feelings of monarchs, known as lèse-majesté — and for ordinary defamation, because Erdogan has also filed a separate complaint with a state prosecutor.

For German speakers: this is the poem that prompted #Erdogan's lawsuit https://t.co/WOKtiG5TqM Bestiality jokes about goats & sheep

That the segment was perhaps intended to demonstrate the difference between satire and defamation to Erdogan himself was suggested by the show’s decision to add Turkish subtitles to the broadcast. That said, it was perhaps an error to subtitle just the poem itself, not the discussion of media law around it, so that Turks who do not speak German were only exposed to the stream of vile insults.

Böhmermann clearly calculated that his fictional portrait of Erdogan as a sex offender would infuriate the Turkish president but still be permitted, since the offensive claims were so clearly exaggerated for comic effect.

His confidence appears to have been misplaced, however. Jan Böhmermann, the host of a late-night comedy program on the German state broadcaster ZDF.

According to Dr. Ralph Oliver Graef, an expert on media law in Hamburg, Böhmermann is likely to lose if either case goes to trial. “You can’t break the law to say, ‘This is what’s illegal,'” Graef told The Intercept. “You can’t shoot someone to say, ‘This is murder, but I am not guilty.'”

Even so, Graef said Böhmermann is more likely to be fined than jailed if he is convicted. As an example of how strict an interpretation of defamation is usually applied in German courts, Dr. Graef explained that you can be convicted of slander and fined merely for calling someone “an asshole” in an argument on the street.

Despite the fact that “public opinion is very pro-Böhmermann in Germany,” Dr. Graef suggested that the prosecutors would be looking at an open-and-shut case, once they set aside the political context. “I have never come across such a very drastic and very insulting poem, because every line is insulting — a normal person would go to court and they would win automatically. The language used by Böhmermann had nothing to do with the political positions of Erdogan, and thus could be justified, but was merely used to attack him as a human being. Under German constitutional law human dignity shall be inviolable.”

He added that German newspapers across the political spectrum, which strongly support Böhmermann’s right to mock the unpopular Erdogan, “are playing their own game.”

Dr. Graef added that strong legal protections against defamation are connected to Germany’s restrictions on hate speech. “There are people here who post on Facebook and other social networks comments like, ‘You fucking immigrants, go home or we will gas you.’ These people are rightly prosecuted and everyone applauds, because of Germany’s history,” he said. “If you agree that hate speech at a certain level is punishable, then you have to be open to the idea that some things are not allowed to be said, even about a dictator.”

Merkel’s decision not to block the prosecution of Böhmermann caused a rift in her governing coalition, and was publicly denounced by Foreign Minister Frank-Walter Steinmeier and Justice Minister Heiko Maas, leaders of the center-left Social Democratic Party, which is allied with the chancellor’s Christian Democrats. The two men revealed that they had both voted against granting Turkey’s request for a federal prosecution but had been overruled by Merkel.

Ministers #Steinmeier+@HeikoMaas on #Böhmermann+why the idea of lese-majeste no longer has a place our criminal law. https://t.co/vxCLBClan6

Thomas Oppermann, another of the party’s leaders said, “Prosecution of satire because of lèse-majesté is not compatible with modern democracy.”